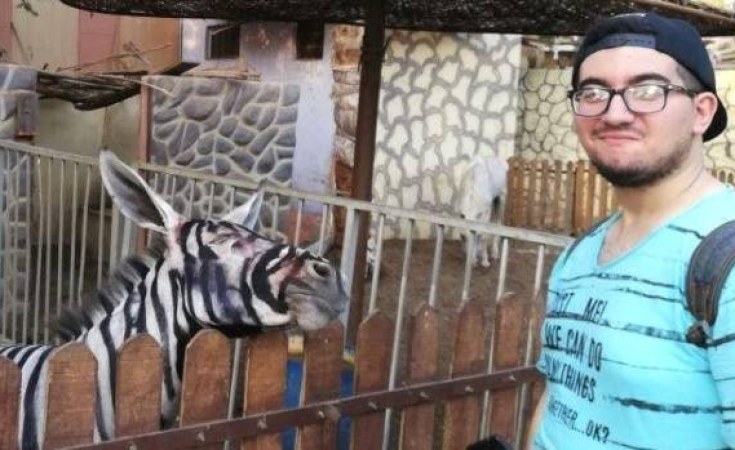 Mahmoud Sarhan/Facebook
Egyptian student Mahmoud Sarhan beside what he claims is a donkey painted to resemble a zebra at the International Garden municipal park in Cairo.
allAfrica.com
By Andre van Wyk

Cape Town — Cairo's International Garden municipal park has faced criticism after photographs of one of its zebra exhibits went viral, Snopes reports. Egyptian student Mahmoud Sarhan shared the images on social media, claiming that the zoo was trying to pass off donkeys painted with stripes as zebras.

According to the BBC, local news provider Extranews.tv contacted Sarhan, who voiced his suspicions that the animals were painted. A vet contacted by Extranews.tv also stated that the snouts of zebras are black and that their stripes are parallel and more consistent compared to the animals in Sarhan's images.

In the images, the "zebras" appear to have smudged stripes while also being smaller than others of their species and have differently shaped ears. However, according to the BBC, zoo director Mohamed Sultan said during an interview with local radio station Nogoum FM that the animals were real zebras and dismissed Sarhan's claims that they were donkeys.

The International Garden municipal park can count itself among several zoos accused of trying to fool their visitors with fake animals. In 2009, Mohammed Bargouthi, owner of the Marah Land zoo in Gaza City, used masking tape and black hair dye on donkeys to pass them off as zebras in an attempt to circumvent Israeli animal importation restrictions, as seen in this BBC report. In 2012 the owner of the Khan Younis Zoo, also located in Gaza, resorted to taxidermy by displaying stuffed animals in exhibits to reduce feeding costs.