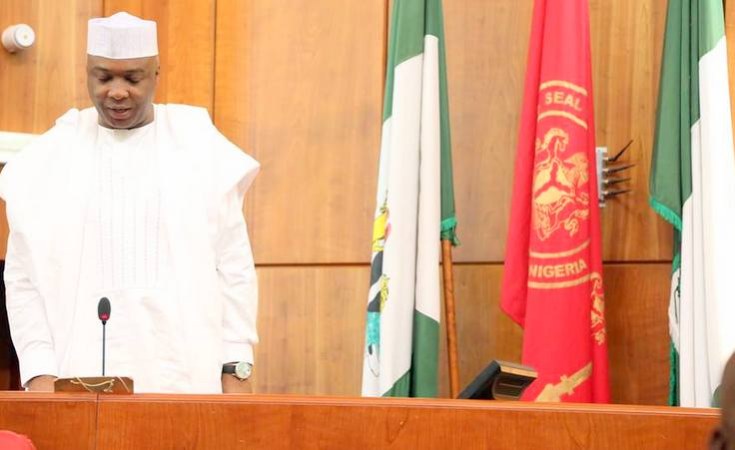 Some protesters on Tuesday morning stormed the headquarters of Nigeria's ruling party, APC, demanding the sack of Senate President Bukola Saraki from the party.

The protesters, who said they were members of the APC in Kwara, also commended the decision of the National Working Committee (NWC) of the party to dissolve the Kwara party executive.

PREMIUM TIMES reported the Monday decision of the NWC to dissolve the Kwara executive which had pledged total loyalty to Mr Saraki. However, the executives rejected the dissolution, saying the NWC acted illegally.

Although Mr Saraki is still officially a member of the APC, he is expected to decamp to the opposition PDP soon. The other federal lawmakers from Kwara were among the over two scores federal lawmakers who defected from the APC last week.

The protesters on Tuesday are however unwilling to wait for Mr Saraki's defection; instead, they want him expelled from the party.

Addressing journalists during their peaceful rally at the national secretariat, Tayo Awodiji called for the expulsion of Mr Saraki for anti-party activities.

"The dissolution of the Balogun APC executives in Kwara State by Adams Oshiomhole and the National Working Committee is highly commendable as it is long awaited," Mr Awodiji said.

He said the dissolution will pave way for proper repositioning of the party ahead of the 2019 election.

The protesters also called for the conduct of fresh membership registration in the state and the recall of the Kwara lawmakers who defected from APC.

Apart from dissolving the Kwara executive, the APC NWC also set up a caretaker committee.

Mr Awodiji congratulated the leader of the caretaker committee, Omolaja Bolarinwa, and assured him of their cooperation and support in building the party.

He also commended the information minister, Lai Mohammed, whose faction is now in charge of the state chapter.

"We congratulate Bashir Omolaja Bolarinwa on his appointment as the chairman caretaker committee while wishing him a successful tenure in office.

"We urge him to brace up for the herculean task of unifying all the elements and interests in the party, which will serve as a springboard for the achievement of greater success."

Mr Bolarinwa belongs to the Kwara APC faction loyal to Mr Mohammed, who is also from Kwara State, although less influential politically, compared to Mr Saraki, in the North-central state. The faction which held separate APC congresses was initially not recognised by the national leadership. It had pledged to go to court to be recognised as the APC leadership in Kwara until the latest twist.

The dissolved faction is loyal to Mr Saraki and the state governor, Abdulfatah Ahmed.

Mr Ahmed, who in 2011 took over from Mr Saraki as Kwara governor, also said last week that he could soon leave the APC.

About a month ago, PREMIUM TIMES published how the now dissolved Kwara APC leadership pledged total loyalty to Mr Saraki.

In a statement by the now sacked chairman, Ishola Fulani, the Kwara APC leadership said it believes the "bond of unity and cohesion in the APC has been weakened, damaged, fractured and severed."