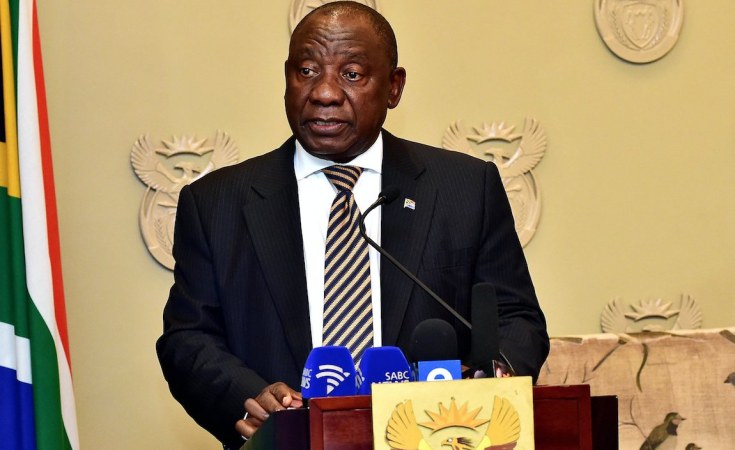 South African President Cyril Ramaphosa has announced plans to change the country's constitution so farmlands can be seized without compensation. White farmers still own far more land than the black majority.

The ruling party in South Africa, African National Congress (ANC), will submit a proposal to amend the country's constitution to help push through its land reform, the country's President Cyril Ramaphosa told the nation on Tuesday.

The controversial reform would allow the government to take land from white farmers without paying for it.

"It has become patently clear that our people want the constitution to be more explicit about expropriation of land without compensation," Ramaphosa said in a televised address.

"The ANC will, through the parliamentary process, finalize a proposed amendment to the constitution that outlines more clearly the conditions under which expropriation of land without compensation can be effected," he added.

Almost one-third of the arable land on South Africa is privately owned, and white farmers own 72 percent of it, compared to only 4 percent from the majority black population. The discrepancy stems from the apartheid era, which ended in 1994.

Last year, South Africa's then-president Jacob Zuma publically endorsed the idea of seizing land, previously floated by the leftist Economic Freedom Fighters (EFF) party. Zuma said that the reform would be conducted "within the law, within the constitution" but only where is "necessary and unavoidable."

Zuma's successor Ramaphosa reportedly opposed the idea at first, but changed course as the country was moving closer to the election set for next year. Still, he sought to temper fears of a state-sanctioned land-grab, saying that the state would focus on parcels that are not being used.

"We will not allow land invasion because it is illegal," he said in March.

EFF needed to vote for reform

Also, the parliament has set up a committee to determine whether the measure warrants a constitutional change, which is due to present their findings by the end of August.

During his Thursday address, Ramaphosa said the reform would "unlock economic growth by bringing more land in South Africa to full use" and let millions more contribute to the nation's economy.

The ANC does not have enough lawmakers in the parliament to amend the constitution on its own, but the support from EFF would allow it to pass the two-thirds threshold.

Many observers are drawing parallels between the ANC's plans and the similar reform in the neighboring Zimbabwe in 2000. The land seizure, championed by Robert Mugabe, triggered mass exodus of white farmers and effectively collapsed coffee and milk production in the impoverished country. Experts believe the reform caused around $20 billion (€17.1 billion) in expenses to the Zimbabwean tax payers and economy, and the country's government eventually decided it would retroactively reimburse the farmers.

However, the ANC has pledged to consider the consequences of its plans and conduct its reform in a way that would bring about economic growth.

Earlier this year, the Australian government signaled it was willing to open its doors to South African farmers if they decide to emigrate out of the country.

Can Land Expropriation Boost South African Property Rights?
Tagged:
Copyright © 2018 Deutsche Welle. All rights reserved. Distributed by AllAfrica Global Media (allAfrica.com). To contact the copyright holder directly for corrections — or for permission to republish or make other authorized use of this material, click here.