Nigeria: What Next for APC, Buhari Administration After Saraki's Exit 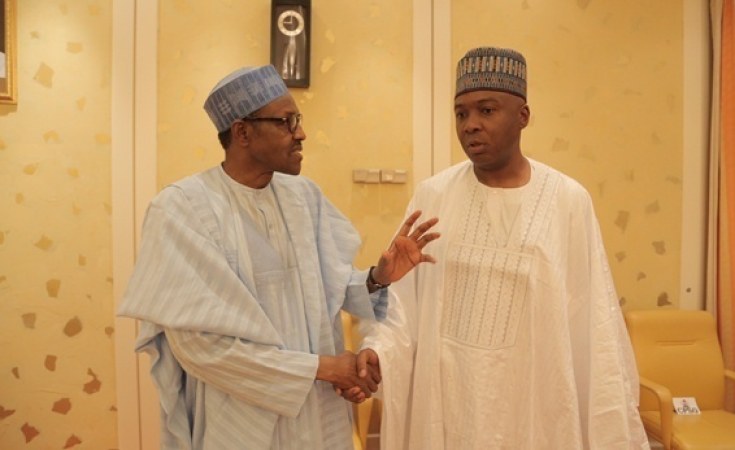 The Senate President, Bukola Saraki, on Tuesday announced that he is leaving the ruling All Progressives Congress (APC), accusing forces within the party of causing his exit.

Mr Saraki is the third in hierarchy in Nigeria's current governance structure coming after President Muhammadu Buhari and Vice President Yemi Osinbajo. His defection, therefore, puts the APC in a difficult situation.

The relationship between Mr Saraki, as head of the legislative arm of government, and the ruling party had been characterised by frictions and distrust after he emerged President of the Senate against the wish of leadership of the party in June 2015.

Mr Saraki faced a lot of "onslaughts" most notably his trial for alleged non-declaration of assets which terminated with the Supreme Court ruling in his favour.

The Senate President also faces allegations that he was a sponsor of armed robbers who murdered and robbed banks in Offa town, in his native Kwara State. Over 30 persons were killed in that attack. The police say their investigations show that some of the armed robbers were Mr Saraki's political thugs and that he may have provided arms and logistics to them. The police also allege that Governor Abdulfatah Ahmed of Kwara, a strong ally of Mr Saraki who also followed him out of the APC Tuesday, was equally implicated by the arrested suspects. Messrs Saraki and Ahmed have denied any links with the suspects and alleged political witch-hunt.

Before Mr Saraki's exit, 14 Senators left the APC last week, after which both chambers of the National Assembly went on recess till September.

After last week's defections, the major opposition party, the Peoples Democratic Party (PDP), speaking through its leader in the Senate, Godswill Akpabio, said that it was now the majority party in the upper chamber.

However, APC Senate Leader, Ahmed Lawan, told State House correspondents after a meeting with President Muhammadu Buhari that the ruling party still has a majority in the Senate with 53 lawmakers.

The PDP, according to Mr Lawan now has 50 Senators.

With his formal exit from the APC Tuesday, attention will now be shifted to Mr Saraki's position as President of the Senate.

The APC can, as the ruling party still with a slight majority in the Senate, try to remove Mr Saraki as senate president. However, that move will fail, several senators told PREMIUM TIMES; because Mr Saraki commands huge loyalty even among APC senators.

Although there are some APC senators like Ali Ndume, who want Mr Saraki to cease being the senate president and would likely support his removal, other APC senators like Senate spokesperson Aliyu Sabi and Kaduna lawmaker Shehu Sani are believed to be opposed to such action.

Mr Ndume told Punch newspapers that although two third of members will be required to remove the senate president, the senate leadership "should emerge from the majority; that is the practice all over the world."

Mr Sabi countered and told reporters that "nobody can remove Saraki. We elected him and we are not ready to remove him yet.

"From day one, they never wanted Saraki. What we are saying is that the right to choose the senate president lies with senators and we have chosen our leader."

Mr Sani also hinted at his support for Mr Saraki to retain his position when he wrote on Wednesday that "The Executive should respect the decision of those who chose to defect, maintain a cordial relationship with them and never attempt to persecute any of them for their individual political decisions."

Another APC senator also told PREMIUM TIMES over the telephone Tuesday night that despite Mr Saraki's defection, "it is simply impossible to impeach the Senate President legally."

The senators' mention of likely failure of 'legal' removal also hints that the Buhari government could attempt an illegal one. At least on two different occasions, officials of the administration, using security agencies, have attempted to force a change in Senate leadership. Both attempts failed and were condemned by most Nigerians.

With the seemingly impossible task of legally removing Mr Saraki from office, the APC can also choose to persuade him to resign; a move that would fail as according to an aide, Mr Saraki intends to continue in office as senate president.

The National Chairman of the APC, Adams Oshiomhole, had in a reaction to the defection of 14 APC senators last week said it was good riddance because that would enable the party concentrate on its campaigns.

National Chairman of All Progressives Congress, (APC), Adams Oshiomhole (m), addressing State House Correspondents after a meeting with the Chief of Staff to the President, Abba Kyari at the State House Abuja on Monday (23/7/18). With him are Spokesperson for President Muhammadu Buhari's 2019 Campaign, Festus Keyamo (L) and former member of the House of Representatives from Birnin-Kudu in Jigawa State. Hon. Farouk Aliyu Adamu. 03946/23/7/18/Ismaila Ibrahim/NAN

He said even while they were in the APC, the senators constituted themselves as opposition to the governing party.

The sour relationship between the executive and legislative arm has affected the smooth running of the administration of President Buhari. For instance, many opine that the relationship is the major reason why it took over six months for the National Assembly to pass the 2018 budget.

However, contrary to widely held perception, Mr Saraki has also made efforts to build a cordial relationship with the executive. A subtle attempt to push for an impeachment process against Mr Buhari over the spending of about $440 million to purchase fighter jets from the U.S. without lawmakers' approval was said to have been thwarted by Mr Saraki.

Despite his travails, the Senate President appears to sometimes follow the path of caution and steer his colleagues to an amicable resolution of conflicting issues as they arise between the Senate and the executive or APC.

Mr Saraki, himself, attested to this when he stated on Tuesday that "over the years, I have made great efforts in the overall interest of the country, and in spite of my personal predicament, to manage situations that would otherwise have resulted in unsavoury consequences for the government and the administration. My colleagues in the Senate will bear testimony to this."

With his defection and reluctance of senators to remove him as their leader, Mr Saraki will be the highest opposition member in an APC administration, a role hitherto performed by Mr Ekweremadu. He will not be there when the ruling party meets to discuss key issues for its governance. He may also not be present when Mr Buhari lobbies for the support of key top government functionaries on important policies for the smooth running of his government.

Mr Saraki's defection may also make it more difficult for the APC administration to easily get the approval of the Senate for important matters. These include appointments, the budget and other spending, especially the knotty funding required by the Independent National Electoral Commission (INEC) to conduct the 2019 election.

The Nigerian Senate, henceforth, is not likely to overlook any infraction from the Buhari-led executive, no matter how small.

An APC senator and key ally of Mr Saraki, however, warns against going confrontational with the executive.

"The Parliament led by the opposition must not be a stumbling block for Government policies and programmes and the person of the president and his office must be accorded the highest respect it deserves," Shehu Sani wrote on Wednesday.

Defection or Disinfection? - Political Prostitutes and the Soul of Nigeria