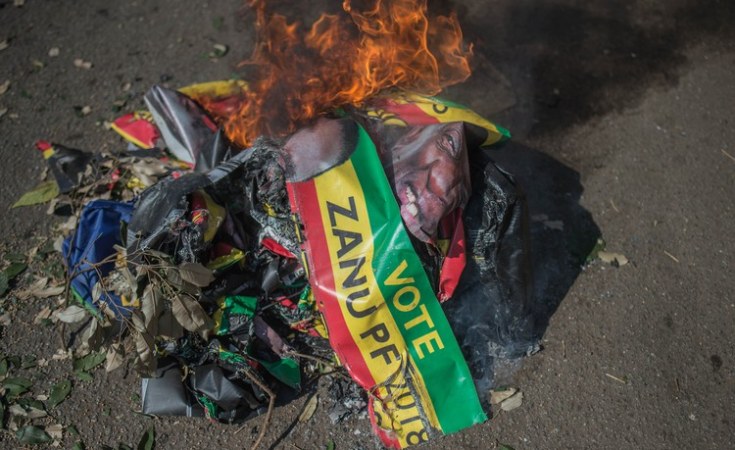 HOME Affairs minister Obert Mpofu warned Wednesday night that "action will be taken" after violence rocked central Harare after it was confirmed that the ruling Zanu PF party had claimed a landslide in the parliamentary elections.

Angry opposition supporters who were already restive over apparent delays in realising the results, particularly for the presidential vote, took to the streets in protests that later escalated into violence and vandalism across the city.

Anti-riot police and military then swept into the city shooting at the protestors as they moved to disperse the crowds. Police confirmed three fatalities.

Addressing a press conference late Wednesday night, Mpofu said; "We will not condone anarchy; wherever it occurs, action will be taken without any reservation.

"We have the necessary legal power and enough personnel to deal with unruly elements in our society and if people want to test our patience, then they will be very disappointed; very disappointed."

Mpofu revealed that he had talked to MDC Alliance leaders Nelson Chamisa and Douglas Mwonzora before the protests degenerated into violence.

"Before the escalation of the demonstrations, I spoke to Nelson Chamisa myself on two occasions as well as their secretary general Douglas Mwonzora who assured me of their cooperation in dealing with the issue, but this was not so.

"That was before the damage and mayhem had started. I was observing the activities from my office on the 8th floor of the Zanu PF headquarters.

"I contacted them (Chamisa and Mwonzora), and we discussed the issues; initially there was denial of them being responsible for this but later it became very clear that it was an MDC Alliance demonstration when they started pulling down banners from our offices, throwing stones and damaging vehicles only at the premises of Zanu PF but still their promised action was not communicated to us."

Action will be taken

He accused the opposition of "grandstanding" and making a mistake by trying to test the government's "resolve".

"Action will be taken, and it will be seen to be taken. The people that are behind this anarchy have exposed themselves; they have been calling themselves democrats and accusing us of being dictatorial, undemocratic."

The opposition would be badly advised if it imaged that Zanu PF has been weakened, the minister added.

"Opposition parties have never enjoyed the freedom of meeting their supporters since independence the way they have been doing, so they have perhaps misinterpreted our understanding to being week.

"I think they are testing our resolve and I think they are making a big mistake. But we are a responsible country and we have the laws that actually give us the power to deal with those that break the law."

Mnangagwa, Zanu-PF Win Zimbabwe Elections
Tagged:
Copyright © 2018 New Zimbabwe. All rights reserved. Distributed by AllAfrica Global Media (allAfrica.com). To contact the copyright holder directly for corrections — or for permission to republish or make other authorized use of this material, click here.