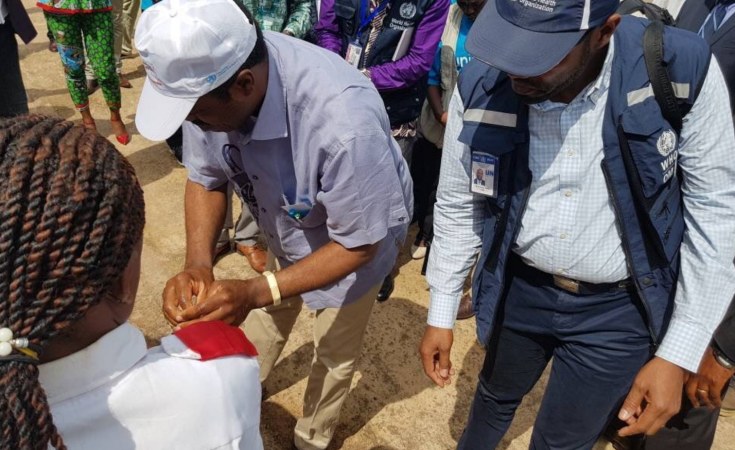 WHO
Responding to an Ebola outbreak in DR Congo.
Deutsche Welle (Bonn)

The WHO said the presence of armed groups and the wide-distance spread of the disease, could make vaccination "near impossible" in North Kivu. It's the tenth outbreak in DRC since Ebola was discovered.

The organization's emergency response chief, Peter Salama, expressed concern about the regional risks this outbreak could pose -- given the pattern of its spread and its closeness to international frontiers.

"It would appear that the risk, as we can surmise for DRC, is high. For the region it's high given the proximity to borders, particularly Uganda," Salama said.

Over a dozen WHO officials have been sent to North Kivu to help contain the disease.

The Democratic Republic of Congo's health ministry said on Thursday that the Ebola variant in the most recent outbreak in North Kivu province had been identified as the Zaire strain.

The North Kivu outbreak comes just over a week after Congo had declared the end of an outbreak in the northwest of the country that began in May, and in which 33 people died. The World Health Organization (WHO) has dispelled the notion that the two outbreaks are linked.

In this week's Ebola outbreak, four cases have been registered in and around the town of Mangina, which has a population of 60,000 and is located near the border with Uganda. Two of those cases were confirmed to be health workers. An additional 20 people have died in the area since July, as a result of hemorrhagic fevers that have not been identified as Ebola.

The outbreak in northwestern Congo also belonged to the Zaire strain and an experimental vaccine from pharmaceutical company Merck was used to fight its spread.

That vaccine was given to contacts of Ebola patients and contacts of contacts, in an effort to ringfence the disease. For ring-vaccination to be effective, health workers must reach all those potentially infected with the deadly virus.

This may be difficult to do in northeastern Congo, as the WHO estimates that the outbreak could spread over tens of kilometers.

Uganda Issues Alert as Ebola Cases Rise in DR Congo
Tagged:
Copyright © 2018 Deutsche Welle. All rights reserved. Distributed by AllAfrica Global Media (allAfrica.com). To contact the copyright holder directly for corrections — or for permission to republish or make other authorized use of this material, click here.