Zimbabwe: ED Pfee With 51pc of the Vote 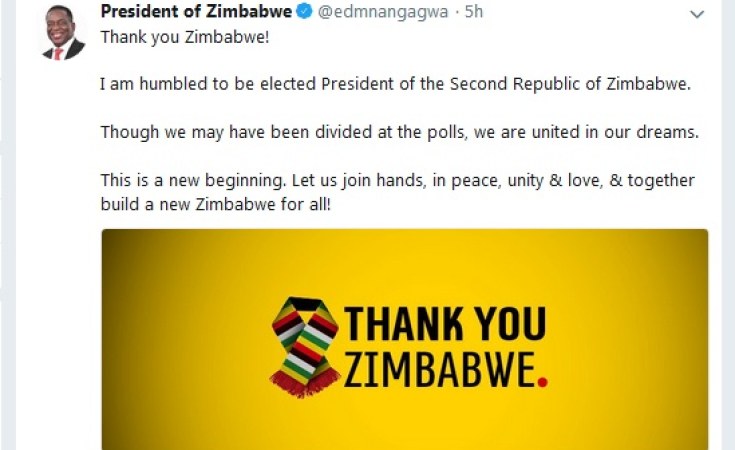 @edmnangagwa/Twitter
President Emmerson Mnangagwa's message on Twitter after being declared winner in the presidential election.
The Herald (Harare)
By Zvamaida Murwira and Innocent Ruwende

Zanu-PF presidential candidate in the just-ended 2018 harmonised elections, Emmerson Dambudzo Mnangagwa, was early this morning declared the duly elected President of the Republic of Zimbabwe. He garnered 2 460 463 votes, beating his main rival Nelson Chamisa of MDC-Alliance who amassed 2 147 436 votes.

The result means Cde Mnangagwa won 50,8 percent of the total votes, while Mr Chamisa had 44,3 percent.

The result satisfied the Constitutional requirement of 50 percent plus one vote for him to avoid a presidential run-off.

"Now therefore, I Priscilla Makanyara Chigumba the chairperson of Zimbabwe Electoral Commission in terms of Section 110 (3)(f)(2) do hereby declare that the votes received by Emmerson Dambudzo Mnangagwa of Zanu-PF party are more than half the number of votes cast in the Presidential Election, therefore Emmerson Dambudzo Mnangagwa of Zanu-PF party is therefore duly declared elected President of the Republic of Zimbabwe with effect from August 3, 2018," said Justice Chigumba.

The President-elect immediately took to his micro-blogging site, Twitter, to thank Zimbabweans for reposing their faith in his leadership and vision.

"Thank you Zimbabwe! I am humbled to be elected President of the Second Republic of Zimbabwe. Though we may have been divided at the polls, we are united in our dreams. This is a new beginning. Let us join hands, in peace, unity & love, & together build a new Zimbabwe for all!"

Congratulatory messages were already pouring in.

Gokwe-Nembudziya legislator Cde Justice Mayor Wadyajena said: "His Excellency, @edmnangagwa, whole-hearted congratulations. It's a been a battle fairly fought and justly won. I believe in your vision for this country & will support the mission to transform our nation 100%. As for saboteur bhora musango agents, what a shambles -- time to repent."

Political analyst Cde Tafadzwa Mugwadi posted on his Facebook page saying: "It is with so much jubilation that I greet you on the eve of our celebration of a victory, well deserved and indeed strenuously worked for.

"In the process I congratulate my Man, the President Elect of the Republic of Zimbabwe, H.E Cde ED Mnangagwa and the Revolutionary party ZANUPF.

"You gave your all Cde President and your Team and this victory is mine, yours and indeed our people's victory together. Zimbabwe now looks for the next five years to your wisdom and leadership. Indeed, the People of Zimbabwe Have Spoken Loudly and Clearly on the future they envision and indeed it is one that is led by you Cde President. The Voice of the People is the Voice of God. Vox-populi, vox-dei

"To those that we may have exchanged harsh words against or traded insults, its time to shake hands and put our difference behind, pull in the same direction and allow the nation a Fresh Start with President ED Mnangagwa."

We Lost Parliamentary Poll, But Not Presidential - Chamisa