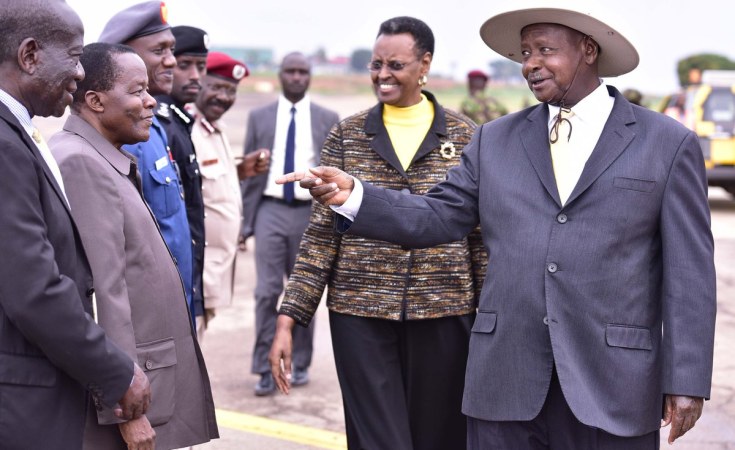 Kampala — The practice by Western powers to forcibly impose their ideas and choices on developing countries is a threat to world peace, President Museveni said yesterday.

Mr Museveni did not provide information to back up the allegations. The New York Times, in an article titled, 'Secrets of History: The CIA in Iran', reported that Britain feared that Prime Minister Mossadegh would nationalise its oil industry and, as such, mooted the coup plot and nudged the United States for a joint operation to return the Shah to power.

They executed the coup. CIA then funneled $5 million (about Shs18b) to Gen Zahedi's government, just two days after the overthrow, the newspaper reported, citing a 1954 account by one of the coup chief planners. The story did not name the person.

Speaking in Kampala yesterday at the Global Peace Leadership Conference, President Museveni said the overthrow of Democratic Republic of Congo's independence leader Patrice Lumumba upstaged governance of the country and plunged it into the unending chaos.

Foreign forces, including United Nations peacekeepers, he said, are not making things any better in Congo.

"It was greed of the Americans. We have also been having the UN in Congo since 1960; what are they doing [there]?" Mr Museveni asked rhetorically.

Uganda, under Mr Museveni, invaded the DRC, then Zaire, in 1997 and alongside Rwandan forces helped topple its long-serving leader Mobutu Sese Seko.

Other threats to world peace, the President said, are conflicts between man and nature as a result of greed, as well as scarcity of resources, democracy and freedom deficits.

The President spoke at length about what he called group chauvinism --the notion that one group, whether ethnic or tribal, is "superior to the rest".

"Here in Africa, the tribes are/were more tolerant, and that kind of tolerance is something I find missing in the Middle East and Europe," he told delegates from 16 countries assembled at the Commonwealth Resort Munyonyo.

The representatives were drawn from, among other countries, the United States, India, Nigeria, South Korea, Tanzania, and Kenya.

"On every issue, someone wants to impose his vision on others," he said, citing the divisive homosexuality subject, which sent the mainly Christian gathering, in euphoria.

Western countries, he said, want developing countries to capitulate to all their demands, including homosexuality, he described as "mishandling of identity and a big mistake."

The mishandling of identity by European powers, he said, was responsible for the unending conflicts in the Middle East and tensions between South Korea and North Korea.

Organisers. The three-day conference under the theme "Moral and Innovative Leadership: New Models for Sustainable Peace and Development," which ends today, is organised by US-based interfaith NGO, the Global Peace Foundation (GPF).

Museveni awarded. The GPF offered President Museveni a global peace leadership award for his "tireless contribution" to peace efforts both at home and in the region.

American televangelist, Dr Robert Anthony Schuller, and former Zanzibari President Abeid Karume presented the prize to Mr Museveni, who dedicated it to all Ugandans to whom he said he only shows "how to go" and follow.

Resolutions. The Global Peace Foundation, following yesterday's deliberations, generated a six-point declaration detailing mechanisms for conflict resolution and sustainable peace. The declaration was signed by President Museveni, GPF's chairman Dr Hyun Jin Moon and President Karume, and will feed into the subsequent summit due in South Korea next March.