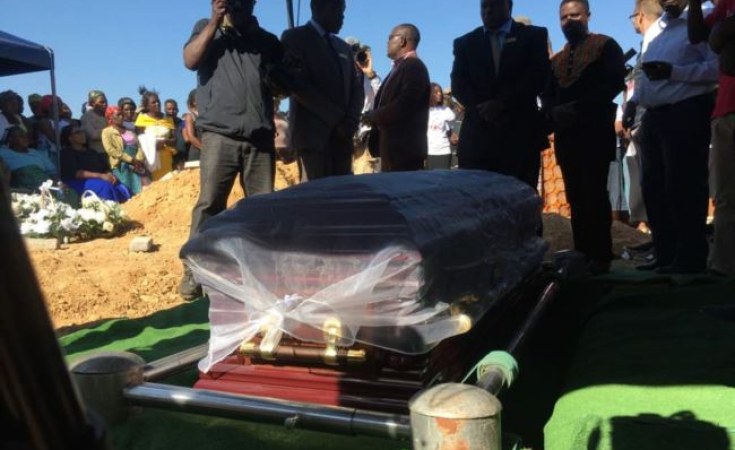 C. Mavhunga/VOA
People attend the funeral on the outskirts of Harare of Sylvia Maposa, one of the people who died during opposition protests
Deutsche Welle (Bonn)

Almost a week after elections, Zimbabweans have begun mourning the dead and praying for peace as they brace themselves for more political wrangling in the week to come.

Seven people lost their lives in Zimbabwe on Wednesday, August 1, when the military opened fire on protesters in the streets of the capital Harare. Opposition supporters had come out to protest the long wait for the election results, which they feared were being manipulated.

At the weekend, friends and relatives of those who had died in the clashes gathered to mourn their loved ones.

Draped in white lace and accompanied by mourners crying and singing, Sylvia Maphosa's coffin was heaved into the funeral van. "She was killed by the criminals in the government," one man cried through a car window, as the convoy made its way to the cemetery.

The civil servant, Sylvia Maphosa, was shot in the back. She was trying to make her way home after leaving her office at the Zimbabwe National Water Authority in Harare's city center. According to her family's lawyer, police initially recorded the cause of her death as a stab wound. After protest from her family, the police corrected it to gunshot wound. Apart from the man in the car, however, nobody at the funeral talked about who was to blame for her death.

Vegetable seller and father of four, Ishmael Kumire, had a similar fate. "He was standing five meters from me and suddenly I heard gunshots. I thought they were firing rubber bullets," Kumire's brother-in-law Ignatious Neshava said. According to him, Kumire even supported the ruling party. He had been trying to protect his goods when the soldiers came.

Mnangagwa reacts to the deaths

President Emmerson Mnangagwa called the death of the seven people a tragedy and called for an independent investigation into Wednesday's events. At the same time, however, he blamed the opposition for the protests.

Some 23 members of the opposition Movement for Democratic Change (MDC) have been arrested and are being charged with "committing public violence" during the protests. A bail hearing is set to take place on Monday.

"They are facing charges of inciting public violence and we want them released without any conditions or on bail. There is nothing linking them to the commission of any offense," said Gift Mtisi from Zimbabwe Lawyers for Human Rights.

Main opposition leader, Nelson Chamisa (MDC) maintains that he rejects the election results. Chamisa argued that he had for strategic reasons not yet released the evidence for these claims.

"Zimbabwe right now needs peace, it needs unity. Zimbabwe is known for peace, it's a peace-loving nation," Emmanuel Masvikeni, who attended a service told reporters. "People dying to prop up the politicians is not justified," he added.

After years of economic decline under Robert Mugabe's regime, one major issue on the minds of Zimbabweans is whether the country's leaders will bring the promised economic changes. Both Mnangagwa and his main rival Chamisa had promised to push for an economic recovery.

"We are looking for a better thing because we are tired of struggling," one street vendor told DW, expressing his disappointment over the election results. "I am not employed. I don't get a pay slip. So as the young generation I was expecting something which could give me a better life."

"There is no law and order here. Nobody is respecting anyone here," a Harare motorist said. "So I don't see any future for Zimbabwe."

Since the ousting of former president Mugabe in November, Mnangagwa has tried to show the face of a new Zimbabwe, open to investors and foreign business. His change in leadership also motivated some younger people to support ZANU-PF's new leader.

"I think that President Mnangagwa is going in a good direction," a Mnangagwa supporter told DW. "I think he will move the country forward."

In Zimbabwe, Tensions Rise Ahead of Planned Anti-Govt Protest
U.S., Canada and Africa