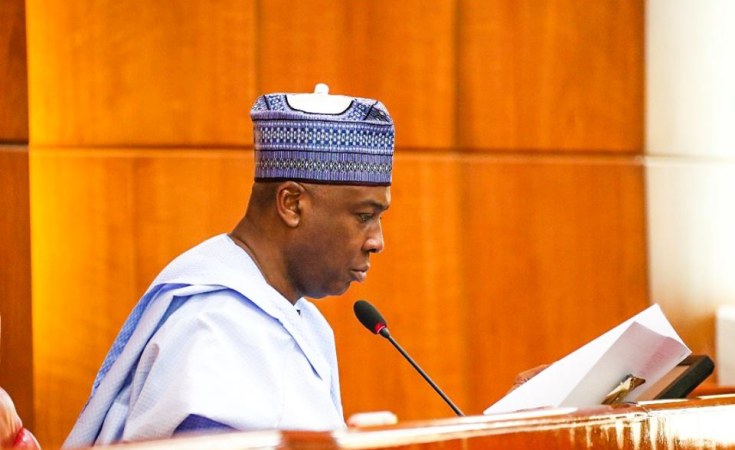 Senate President Bukola Saraki is coming under pressure to reconvene the National Assembly to consider President Muhammadu Buhari's request on the budget for the conduct of 2019 general election, among others.

But lawmakers loyal to Saraki are interpreting the move as a plot to ease him out as Senate President having defected from the ruling All Progressives Congress (APC) to the Peoples Democratic Party (PDP).

The National Assembly had on July 24 embarked on its annual recess which is scheduled to last till September 25.

President Buhari had in a letter dated July 11 requested the approval of the lawmakers for N242bn for the Independent National Electoral Commission (INEC) to commence preparations for 2019 general elections. The fund, according to the letter read by Bukola on July 17, should be provided through supplementary or virement.

Leading the call, the Senate Leader, Ahmad Lawan, urged his colleagues to reconvene in order to consider the president's request on INEC budget, saying there was urgent need for the lawmakers to do so.

Also, speaking last night, chairman of the Senate Committee on Agriculture, Abdullahi Adamu, said the senators should not have adjourned without considering the president's request on the election fund.

"Nobody will deny the fact that we have a serious job to do. The president presented the supplementary budget for the forthcoming elections but the leadership deliberately left the request. Something of national interest, they deliberately don't want to take it because they want to sabotage the government. They brought our recess forward by two days to achieve their plot. Definitely, there is need for us to reconvene to attend to the request. No doubt about that," he said in a phone interview last night.

Also, a ranking senator told Daily Trust that no matter what Senate President Bukola Saraki tried to do, the Red Chamber must be reconvened and that the Senate President cannot escape removal.

"Not only election fund, there's the issue of the confirmation of the ICPC nominees, which is key to the fight against corruption of this administration.

"We also have the confirmation of nominees for FERMA and the Federal Civil Service Commission (FCSC), Deputy Governor of the Central Bank, National Judicial Commission ‎(NJC), all these are still pending. We're supposed to consider them, and between now and September 25 is a long time.

"Like that of INEC, it's very critical because they have to procure some equipment, sensitive and nonsensitive materials ahead of the elections.‎ All these are matters of urgent national importance, unless he's bent on sabotaging the democracy. If he doesn't reconvene, we know the action we'll take.

"They're talking about constitutional requirement for the impeachment of the Senate President, but we don't really need that. What we're going to do is not impeachment but removal. The two are not the same. In the case of impeachment, we need to tell him his offences, but in this case we say we just don't want him."

However, a lawmaker, who recently dumped the APC, said the National Assembly did not do anything wrong by going on recess, adding that those calling for it to reconvene have sinister motive.

"It is clear that what they want is leadership change. It is more than just reconvening to consider the election fund. Whatever their plan, we are ready for them," he said.

Presidency appeals to NASS to reconvene

The Presidency on Sunday also appealed to the National Assembly to reconvene and consider urgent matters pending before it as they may affect the running of Nigeria and matters affecting Nigerians.

The Senior Special Adviser (SSA) to the President on National Assembly Matters (Senate), Sen. Ita Enang, made the appeal at a news conference in Lagos.

"We are appealing to Senate leadership and all caucuses of the National Assembly to see this as a clarion call for the good of the nation.

"As the Liason Officer between the National Assembly and the federal government, I know it is not the intention of the Lawmakers to make Nigerians suffer.

"The National Assembly vacation is usually planned to coincide with school vacations so that members can spend time with their children.

However this is an election year and the budget has just been appended to hence the urgent need to give approval for Supplementary funds for it.

"We are not compelling them, we are appealing to them. As a liaison officer between the Presidency and the National Assembly, my duty is to make sure that both arms stay together and work in harmony," he said.

Meanwhile, a ranking senator has alleged moves by the senate leadership to frustrate access to the upper legislative chamber to prevent possible sitting that could lead to the Senate President's removal.

The senator also said that the Senate must reconvene before September 25 to attend to some matters of urgent national importance.

"They're ready to do anything to hold on to power including hiding the keys to the Senate chamber. But what they don't know is that if we want to remove the man (Saraki), we don't need to do it inside the chamber.

"We can do it anywhere in Abuja provided we have the symbol of authority, which is the mace," the senator, who did not want to be named for strategic reasons, said.

When contacted, the Special Adviser to the Senate President on Media and Publicity, Yusuph Olaniyonu, declined comment on the matter and referred our correspondent to confirm from the National Assembly management if at all Saraki directed them to hand him over the keys to the Senate chamber.

The PDP said ‎any attempt by the ruling APC to forcefully take control of the National Assembly would lead to crisis and anarchy.

‎The party in a statement last night by its National Publicity Secretary, Kola Ologbondiyan, alleged that there was a grand plan "by the APC and its agents" to forcefully oust the Senate President, Bukola Saraki and his Deputy, Ike Ekweremadu.

‎"Any attempt to tempt the will of the people in this direction is a clear recipe for very serious crisis.

"This caution by the PDP comes against the backdrop of yet another plot by the APC and its agents to flood the National Assembly with armed plain clothed security operatives to compromise the security architecture to enable the forceful takeover of the leadership of the Senate by minority APC senators.

"The laid down rules for reconvening the Senate whenever it is on recess, which must be followed when it becomes compelling to reopen the senate on a date order than the earlier adjourned date, are clear and direct.

"In such a circumstance, Order 12(2) of the Senate Standing Rule (2015) clearly vest such powers and functions on the Senate President, who shall give notice of such new date and time.

"Anything outside the provision of the law is a direct coup not only against the National Assembly but also on our entire democratic system.

"It is a clear recipe for anarchy of monumental proportion capable of disarticulating our nation," the party said.

Saraki Calls for Emergency Meeting of National Assembly Leaders
Tagged:
Copyright © 2018 Daily Trust. All rights reserved. Distributed by AllAfrica Global Media (allAfrica.com). To contact the copyright holder directly for corrections — or for permission to republish or make other authorized use of this material, click here.