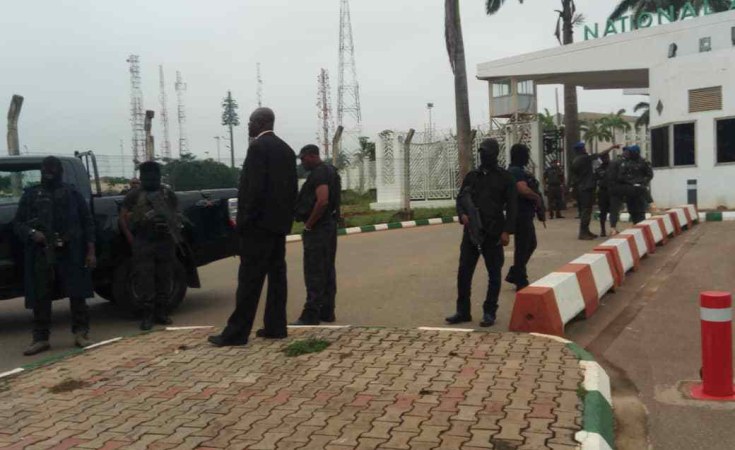 Officers of the Department of State Services have barricaded the entrance of the National Assembly in a percieved bid to aid pro-Buhari Senators impeach Senate President Bukola Saraki and his deputy, Ike Ekweremadu.

Members of the House of Representatives and staff of the National Assembly are being turned back.

PREMIUM TIMES learnt that some 30 pro-Buhari Senators had a meeting overnight with the director general of the SSS, Lawan Daura, to plot the impeachment.

PREMIUM TIMES has also gathered from reliable sources that the senators have planned to elect the senate leader, Ahmed Lawan, as Senate President and Hope Uzodinma as his deputy.

As at the time of filing this report, more police officers are arriving the National Assembly.

Some lawmakers had in past few days insisted Senate President, Bukola Saraki, quit his position having defected from the majority party.

Security Chief Sacked Over Blocking of Nigeria National Assembly
Tagged:
Copyright © 2018 Premium Times. All rights reserved. Distributed by AllAfrica Global Media (allAfrica.com). To contact the copyright holder directly for corrections — or for permission to republish or make other authorized use of this material, click here.