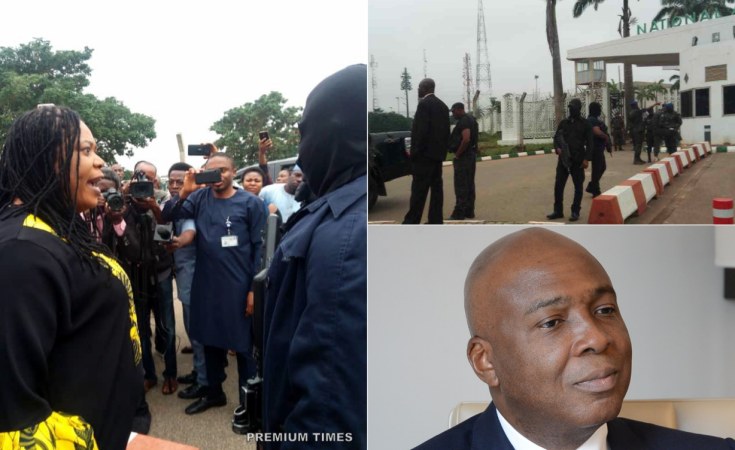 The Inspector-General of Police (IGP), Ibrahim Idris, has said the Nigeria Police Force was not involved in the siege on the National Assembly (NASS) by security operatives.

Mr Idris absolved the police of any blame after a closed-door meeting with the Acting President, Yemi Osinbajo, at the Presidential Villa, Abuja.

He said the standoff at the NASS complex reached him as a surprise, adding that the police would soon issue a statement in relation to the impasse.

"Obviously, like I said, I have not got a detailed brief on that. In fact we are going to issue a (press) release (on that)," he said.

Mr Osinbajo had on Tuesday sacked the Director General of the State Security Service (SSS), Lawal Daura, with immediate effect, over Tuesday's invasion of the premises of the National Assembly by security operatives.

Mr Osinbajo condemned the unauthorised standoff at the National Assembly complex, describing it as "a gross violation of constitutional order, rule of law and all acceptable notions of law and order".

He said, the "unlawful act, which was done without the knowledge of the Presidency, is condemnable and completely unacceptable."

The acting president, therefore, assured Nigerians that all persons within the law enforcement apparatus, who participated in "this travesty" would be identified and subjected to appropriate disciplinary action.

The sacked SSS boss had, along with the IGP and the Chief of Staff to the President, Abba Kyari, earlier met behind closed doors with the acting president.

The Tuesday siege was mainly carried out by the SSS and lasted from the early hours of Tuesday till afternoon. The siege was lifted about an hour after Mr Daura was sacked from office.

At the start of the siege, everyone, including lawmakers, was prevented from entering the National Assembly. However, lawmakers were later allowed in while journalists and staff of the assembly were barred.

The siege is believed to have been targeted at Senate President Bukola Saraki to allow his removal from office while senators opposed to him would be allowed in.

That move appeared to have been abandoned following public outcry. Most Nigerians including leaders of opposition parties condemned the actions of the security agencies.

The UK government also expressed concern, saying it was monitoring the development.