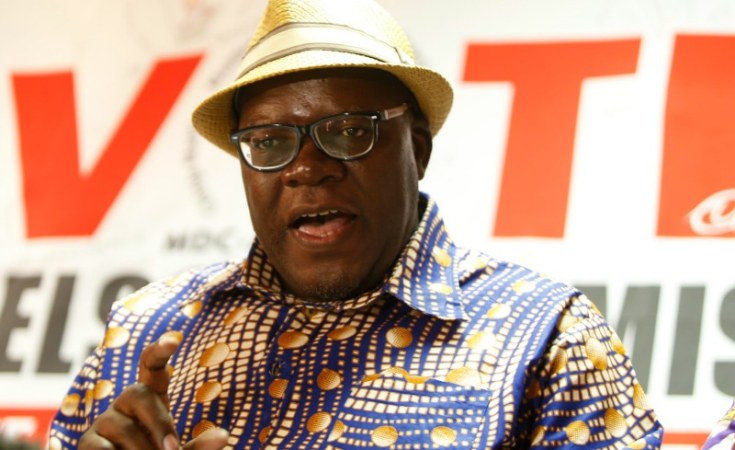 Biti is wanted by authorities on charges of organising last week's opposition protests that turned deadly after the military was called in and used live ammunition, killing at least six civilians.

The embattled top opposition leader was saved from arrest by Zimbabweans who were queuing for immigration formalities when some detectives tried to arrest him.

This is according to a memorandum from the Central Investigations Department (CID) Chirundu addressed to the District Central Intelligence Officer for the area and copied to Harare CID, dated 8 August 2018.

Biti is said to have taken advantage of that Zimbabwe has a One Stop Border Post with Zambia situated on the northern neighbour's soil.

He reportedly arrived at the border in a vehicle driven by one Tawanda Blessing Chitekwe and two other unidentified men before the drama that sucked in Zimbabwean travellers.

"Upon arrival at the border, which is geographically located across the Zambezi River on the Zambian soil, the wanted person then gave a Zambian agent their passports who avoided Zimbabwe immigration formalities and presented the passports to Zambian Immigration officials.

CID officers manning the vehicle clearance desk on the Zambian side were also notified about the issue and they sought for reinforcement from the station and security details from the intelligence to effect Biti's arrest.

"The accused person and his associates were approached and he strongly resisted arrest arguing that he was protected by International law since he had already crossed the Zambezi river and was in the process of applying for asylum.

"He went further to state that police officers had no right to interview him on foreign soil hence all the accused persons refused to furnish their full particulars," the police document further reveals.

"At the same time, Tendai Luxton Biti shouted on top of his voice saying he was being abducted and called for assistance from Zimbabwean travellers going to Zambia numbering approximately 300 people."

According to the memo, a fracas ensued in which travellers "joined in and refrained (sic) security agents as they were effecting arrest on the accused person and his associates".

"Since there was commotion, Zambia authorities joined in and assisted Zimbabwe authorities and took the accused person and his associates to immigration offices, Zambia.

"The Zambian state agents then had an interview with the wanted person and his associates. They ordered the Zimbabwe security agents not to enter their office," added the memorandum.

After consultation the notice reveals that Zambian authorities stopped their Zimbabwean counterparts from arresting Biti.

"The Zambian authorities being led by number 10961 Detective Inspector Mwaba who is the Officer-In-Charge CID Chirundu Zambia without considering the Chirundu One Stop Border Post concept then threatened Zimbabwe authorities with arrest for executing their mandate on Zambian soil.

The Zambians also refused to attend a joint security meeting by officials from both countries to discuss the matter proposed by the Zimbabwean officials.

"A team of Zambia Para Military Troop armed with AK 47 Rifles came to the border and escorted the accused person, his associates and the Toyota Hilux vehicle which had not been tendered for clearance by Zambia Police Service, Chirundu," the memo reveals.