The number of aspirants seeking to get the ticket of the Peoples Democratic Party (PDP) is set to rise as Senate President Bukola Saraki said he is considering running against President Muhammadu Buhari.

Saraki, who is in a faceoff with the All Progressives Congress (APC) after defecting to the PDP, gave the indication in an interview he granted to Bloomberg at his Abuja residence.

"I am consulting and actively considering it," Saraki said, adding that "I believe I can make the change."

Daily Trust reports that if Saraki decides to run, he will vie for the PDP ticket along with at least 10 other contenders.

There are also former Minister of Special Duties Kabiru Turaki, founder of Baze University Senator Datti Baba-Ahmed, among other contenders, some of whom have not formally declared interest but were expected to do so before the party's primary election likely coming up in October.

Daily Trust reports that Saraki's visit to former President Olusegun Obasanjo and former military President Ibrahim Babangida earlier may all be part of the consultations the senate president said he was making.

Saraki said investors and citizens had lost confidence in the president, who won election in 2015 after three previous attempts, thereby putting an end to 16 years of PDP rule.

He however said that "The PDP has learnt its lesson from the loss in 2015, and I think unfortunately the APC did not learn from their victory."

While negotiating with the PDP "we listed a number of issues. We talked about how to sustain and improve the fight against corruption; the issue of providing more powers to the states; inclusion and having a more nationalistic approach on things we do; to continue to improve the environment that will ensure investments. We listed a number of items during the discussions with the PDP, and there is a written agreement to that. We trust that we can hold them to that."

"We would ensure that the party is strong on security. The APC too have not done well on the issue of security. We have the opportunity with the right kind of presidential candidate and president to provide the leadership for the party. The party has a good opportunity to lead the country in the right direction."

We're not afraid of Saraki, others- APC chieftain

Daily Trust reports that there was no immediate reaction from the ruling APC to Saraki's hint at running for president, but a chieftain of the APC and the Director General of Voice of Nigeria (VON), Mr Osita Okechukwu, said yesterday that the party was not afraid of any presidential aspirant, including Senate President Saraki.

Okechukwu, in a phone interview, said President Buhari who remained the presumptive consensus presidential candidate of the APC was ready for any challengers.

He said the party would present its massive infrastructural development and the feat achieved in the fight against corruption and insecurity.

He said, "We are not afraid of anybody, as from today in Nigeria, who will defeat President Muhammadu. Whoever wants to challenge him, we are waiting for the person. The little we know is that we are going to present the facts. We are going to present massive infrastructural development going on across the country - 5000km of federal roads, 5000km of rail lines, 5000 additional megawatts of electricity and the target for self-sufficiency in food production.

"It's the most ambitious and massive infrastructural development in the history of Nigeria as an independent nation. It has three, five years completion cycle. That is what Mr President has on the table.

"We are have to present the fight against corruption and insecurity. So, we don't know who become the candidate. But we are waiting.Our happiness is that President Buhari today is the presumptive consensus presidential candidate of the APC. We are waiting for anyone of them to come."

Other party leaders as well as top government officials, including the Secretary to Government of the Federation (SGF) Boss Mustapha, APC national chairman Adams Oshiomhole and leader Asiwaju Bola Ahmed Tinubu, had all said recently that no defections or gang up will stop Buhari from winning re-election in 2019.

Sokoto State Governor Aminu Tambuwal yesterday said there was mounting pressure on him to declare for presidency.

He said though President Muhammadu Buhari is a man of integrity, he should be voted out because he is too old to lead Nigeria.

The governor said this in Sokoto yesterday while addressing different associations of students and youths as well as residents who paid him solidarity visit.

Alleging that some cabals had hijacked Buhari's government, he dismissed the insinuations that he was the president's enemy.

"We love President Buhari and that was why we supported him in 2015 unconditionally and while doing that we are too sure that he will seek for re-election after his first term but when things are wrong we have to tell him.

"We still believe in his integrity, patriotism and courage, but these are not enough for a leader. We all know that there is a vacuum in government occasioned by his disposition probably because of his old age or health condition that is why Nigerians are yearning for younger ones to lead this country.

"The country needs somebody who will respect the rule of law and who will not be selective in fighting corruption," the governor said.

Tambuwal also disclosed that there was mounting pressure on him to declare for presidency.

"I have been receiving advice and encouragement from our leaders, peoples across the country and even from abroad to contest for presidency and this pressure is being mounted. It is not my making, but the quantum of pressure from everywhere because of leadership gap in the country," he said.

The governor said he would make his position public on the matter "in days to come".

'Tambuwal has been declared missing'

A Presidency source yesterday night asked our correspondent to find out, where is Tambuwal speaking from.

The source who do not want to be named said information available to the Presidency is that Sokoto People have declared their governor missing from the day he announced his decamping from the APC.

"We heard this announcement on FRCN Kaduna's missing persons program. Where is he? His people are looking for him," the source, a top aide said. 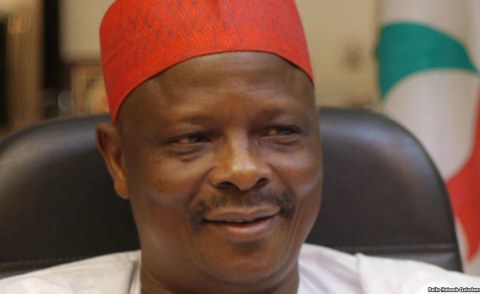 Saraki Says Buhari Forced Him Out of the Ruling Party
Tagged:
Copyright © 2018 Daily Trust. All rights reserved. Distributed by AllAfrica Global Media (allAfrica.com). To contact the copyright holder directly for corrections — or for permission to republish or make other authorized use of this material, click here.