South Africa: The Forgotten Widows of Marikana - 'It's Like Our Husbands Killed Themselves' 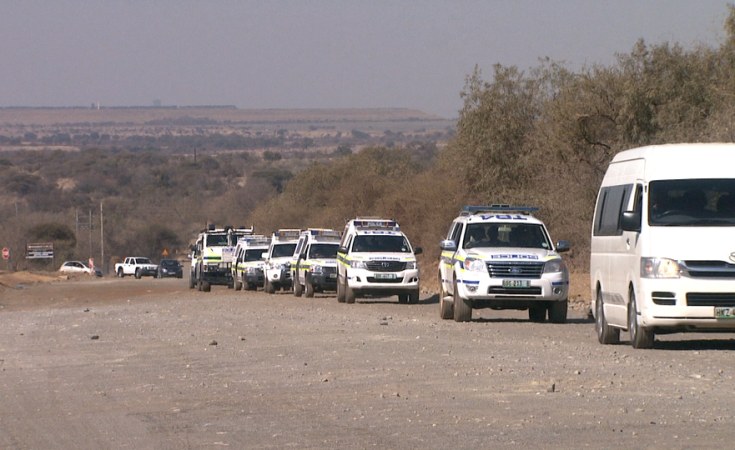 Photo: Miners Shot Down
Police being deployed to Marikana before the killings.
News24Wire (Cape Town)

Six years after the Marikana massacre, a widow of a Lonmin Protection Service superintendent who was killed in clashes leading up to the massacre, believes that she and others like her have been forgotten.

During a commemoration ceremony at the Lonmin Conference Centre in Mooinooi, North West on Wednesday, 44 candles were lit to pay tribute to those who lost their lives due to the wage strike at Lonmin in August 2012.

Aisha Fundi attended Wednesday's commemoration with a lot of pent up emotion.

She is the widow of Hassan Fundi, who worked for Lonmin Protection Service as a superintendent. She said her husband had been hacked and burnt alive during clashes as strikers made their way to the Lonmin offices.

Fundi said she and other widows of those killed in the days leading up to the massacre have been overlooked.

"We are the forgotten widows of Marikana. Nobody is talking about us. We don't exist and that makes us cross," she said.

"It's been six years of misery and helplessness, especially from the stakeholders," she said, adding that she thought the stakeholders were people who knew what happened in Marikana and who were able to fix it. She was referring to Lonmin, the government, politicians, union leaders and community leaders, she said.

'There are no sweet deaths'

"They know that [more] people lost [their lives] in Marikana, not only the 34 people. The 34 people killed 10 people, innocent people."

Fundi added that the scars and wounds of August 2012 were still fresh because nothing tangible happened regarding for the ten victims and added that there has still not been reconciliation between them and the families of the 34 slain miners.

"If you want to fix Marikana, you need to talk about the incident of Marikana holistically, let's tackle each and every incident. We need reconciliation. As long as this division goes on we are not going anywhere."

"We need to reconcile and move on, there are no sweet deaths. We all lost loved ones."

Fundi called on President Cyril Ramaphosa and urged him to listen to their pleas.

ANC Statement On Anniversary of the Marikana Tragedy

'No Justice' for South African Miners Seven Years After Massacre
Tagged:
Copyright © 2018 News24Wire. All rights reserved. Distributed by AllAfrica Global Media (allAfrica.com). To contact the copyright holder directly for corrections — or for permission to republish or make other authorized use of this material, click here.