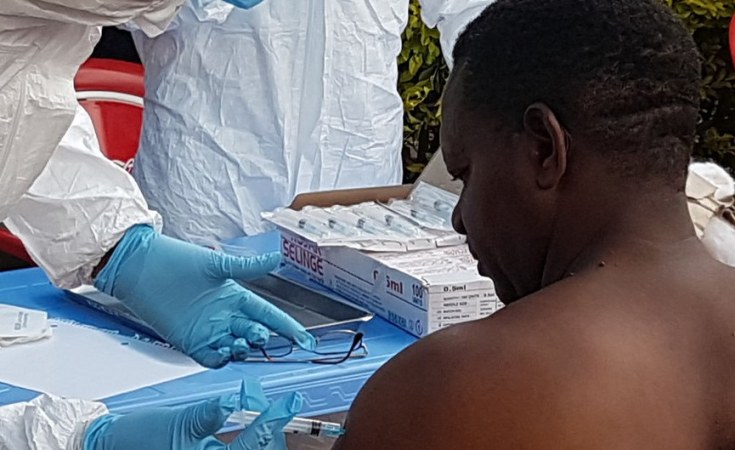 Eugene Kabambi/World Health Organisation
On 8 August 2018, the vaccination of frontline healthcare workers started, followed by the vaccination of community contacts and their contacts, in Mangina, North Kivu, the epicenter of the 10th Ebola epidemic to hit the Democratic Republic of the Congo. There are currently 3220 doses of rVSV-ZEBOV Ebola vaccine available in Kinshasa.
Medecins Sans Frontieres (Geneva)

New York — The international medical humanitarian organization Doctors Without Borders/Médecins Sans Frontières (MSF) opened an Ebola treatment center on Tuesday, August 14 in Mangina, a small town considered to be the epicenter of the outbreak in North Kivu, Democratic Republic of Congo. A total of 37 patients are currently hospitalized in this facility, with  31 of those cases confirmed and six suspected cases.

“Among our patients, we have several colleagues from the Congolese health system,” said Gwenola Seroux, MSF emergency programs coordinator. “They were the first to respond, and some were exposed to the virus.”

Before this center opened, MSF was working in an isolation unit in the area to improve safety and implement protection measures. All patients from that unit have been transferred to the new Ebolatreatment center.

In order to address some of the response priorities set by health authorities, MSF is working along the route between Mambasa and Makeke in Ituri province, visiting health centers to set up isolation rooms, undertaking surveillance activities, and liaising with community health workers to raise awareness about Ebola. Infection prevention and control protocols are also being reinforced in the region—and in MSF’s existing non-Ebola projects in the area—to prevent further spread of Ebola, which is a critical pillar of Ebola outbreak response.

In neighboring Uganda, MSF is part of the national task force to ensure effective preparations are in place to tackle the risk of cross-border contagion.

Critical Ebola prevention and treatment activities such as contact tracing, community outreach, surveillance, alert investigation, vaccination, and health promotion are inevitably hindered by the fact that North Kivu is one of the most unstable areas in the region. Ongoing conflict and heavy military intervention have resulted in a high number of displacements, worsening the chronic problem of limited access to healthcare. Additionally, large movements of people can happen suddenly in response to an outburst of violence.

Figuring Out How to Fight Future Ebola Outbreaks
Tagged:
Copyright © 2018 Medecins Sans Frontieres. All rights reserved. Distributed by AllAfrica Global Media (allAfrica.com). To contact the copyright holder directly for corrections — or for permission to republish or make other authorized use of this material, click here.