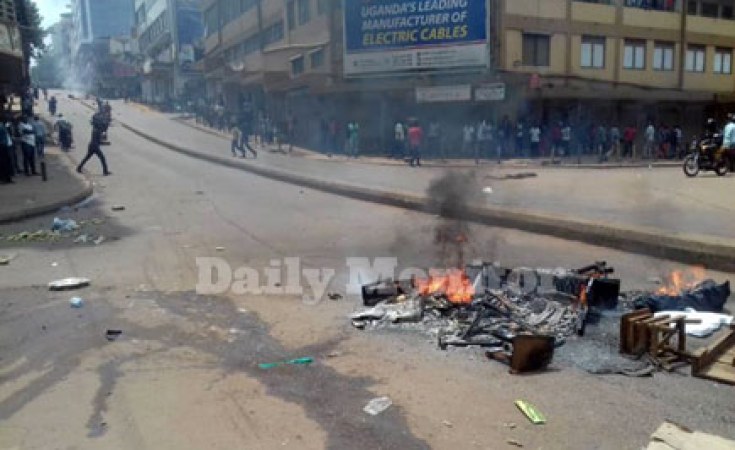 Abubaker Lubowa/Monitor
At least a dozen people have been arrested in an operation commanded by ACP Dennis Namuwooza.
Deutsche Welle (Bonn)
opinion

The recent crackdown on opposition leaders and the media in Uganda are clear signs the country is slowly sinking into anarchy and becoming a lawless state. This could lead to instability, writes DW's Isaac Mugabi.

Once hailed as a freedom fighter and liberator, Uganda's President Yoweri Museveni, who has been in power since 1986, is turning into an autocratic leader, bent on silencing the opposition, and suppressing the media in order to maintain a firm grip on his power. This only confirms that Uganda, like some other countries in the region, is slowly degenerating into a failed state.

Selfish interests and the lack of tolerance for divergent views -- especially from the opposition and civil rights groups -- have tainted Museveni's image in the eyes of many Ugandans. Whatever is happening in Uganda in the political sphere is clear proof that absolute power does indeed corrupt. It is a vivid example of how some leaders hate their own people -- in particular the youth -- out of fear of being ejected from the seat of power.

Despite being held in high regard within the international community, Museveni will nonetheless go down in the books of history as a freedom fighter who betrayed his people, and a leader who knew what needed to be done but still chose to look the other way. Currently, uncertainty looms with regards to where the country is heading. Rampant corruption in virtually all government institutions continues unabated. The judiciary has lost its sanctity and police brutality is at its peak. More often, police and the army are unleashed on peaceful demonstrations, but take their time showing up in the case of an emergency. Tear gas has been imported in large quantities, while hospitals still lack beds and necessary drugs.

The recent arrest of a renowned pop singer and prominent government critic, Robert Kyagulanyi -- better known by his stage name Bobi Wine -- on direct orders from the state is a clear indication of how far Museveni will go to impose his authoritarian leadership style.

Kyagulanyi was arrested after the presidential motorcade was attacked by people throwing stones. He was later arraigned before a military court and charged for illegal possession of arms -- a charge many Ugandans believe is politically motivated.

This means that he could face the death penalty because the charges leveled against him are treasonous in nature. Despite the lack of evidence, authorities continue to hold him incommunicado which is against all the tenets of international law, and the country's constitution. He should be allowed unfettered access to his attorneys and family if authorities think there's nothing sinister about the circumstances that led to his arrest.

Regardless of where you are in the world, no one should attack a presidential convoy because it's a recipe for unforeseeable disaster. But at the same time, a thorough investigation is important in order to hold the perpetrators accountable.

If Kyagulanyi instigated the attack on Museveni's convoy then justice should take its course. Because justice delayed is justice denied. But much as the Ugandan government has pushed the narrative that opposition supporters are entirely responsible for the attack on the president's convoy, it's also possible it could have been an inside job coordinated by some elitists who are frustrated with his stewardship of the country. However, such attacks only give African leaders the opportunity to crack down on the opposition and settle personal vendettas with those they deem a threat to their power. But for how long will such evil maneuvers continue to take place before regional leaders and the international community speak out?

Museveni, From Bobi Wine's Liberator to Tormentor
Tagged:
Copyright © 2018 Deutsche Welle. All rights reserved. Distributed by AllAfrica Global Media (allAfrica.com). To contact the copyright holder directly for corrections — or for permission to republish or make other authorized use of this material, click here.