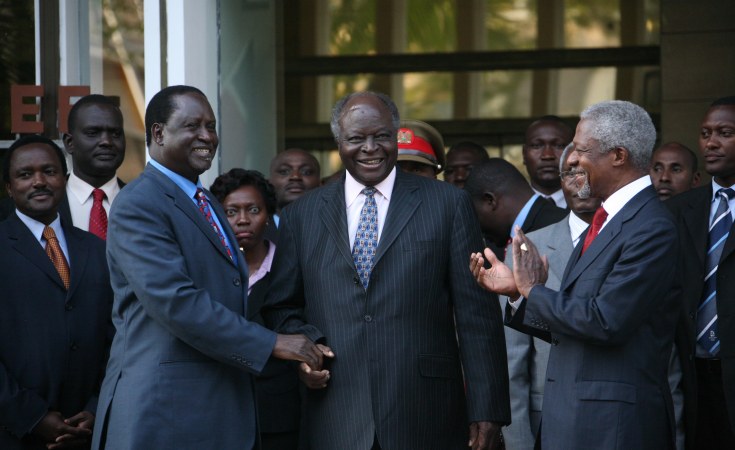 "The Lord had the advantage of being able to work alone", is one of former United Nations Secretary General Kofi Annan's famed quotes, and one which he largely exercised during his gruelling 41-day Kenyan mediation exercise in 2008.

In his book, Interventions: A Life in War and Peace, Mr Annan confesses he had to act solo "as some Lord of sorts" in order to save Kenya from the brink of collapse, following the bloody post-election violence of 2007 that left of 1,000 people dead and hundreds of thousands maimed and homeless.

The book, one of the top diplomat's recent texts, chronicles the behind-the-scenes manoeuvres that eventually brought back Kenya to its feet. Hiding behind his famous quote, Mr Annan observes in some crucial instances, a solitary mind works better than a group. And this is why, as he reveals, he suspended mediation proceedings at the Serena Hotel in late February and decided to confront Mwai Kibaki, who had controversially been declared winner of the presidential poll.

And many are the times when Mr Annan admittedly isolated members of the mediation team representing Mr Kibaki's Party of National Unity (PNU) and Mr Raila Odinga's Orange Democratic Movement (ODM), in order to realise a political settlement between Kibaki and Odinga.

And yesterday morning as he breathed his last in Switzerland, Kenyans were doubtlessly among those who were touched most by Mr Annan's demise. This is because the United Nation's seventh Secretary General spearheaded a most crucial effort that saved Kenya from joining the growing list of the world's failed states.

Despite his long experience of peacemaking across the globe, Mr Annan confessed that the Kenyan peace talks were like no other. Last year in March, while marking 9 years since brokering the Kenya peace deal, he conceded: "My role in mediating was among the most intensive and enduring of all my interventions."

But Mr Annan's interest in Kenya affairs did not end with the signing of the peace pact at the steps of the Haraambe House office in 2008. He has been around and shown great interest in the country's recovery, right from the moment of formation of the so-called Agenda Four peace-deal implementation institutions, handing over of the "Waki envelope" (list of individuals suspected to have engineered the post-election violence) to the International Criminal Court (ICC) to last year's General Elections.

And ever since, the former UN chief has observed with keen interest every major historic development in the country, including prMarketing Insights Withomulgation of the Constitution in 2010, and other key processes aimed at improving governance and the fight against graft.

His love for Kenya has been so profound that at some point during the Serena talks and much later following subsequent elections, politicians allied to the ruling party became uncomfortable with his visits and remarks critical of the country's democratic tenets.

To some, the Ghanaian may have been more Kenyan at heart than a host of politicians. In an earlier interview with the Centre for Human Dialogue, Mr Annan said his interest in Kenyan affairs had earned him some negative attributes of dictator and fox.

"The Serena Team started calling me 'the fox' when I got them to agree to things they didn't want to agree on. But the other one (dictator) came because I was pushing them hard to agree on the whole question of governance of their own country".

Kofi Annan and Kenya - Hero to Some and Villain to Others