Zimbabwe: All Eyes on ZBC-TV as ConCourt Sits 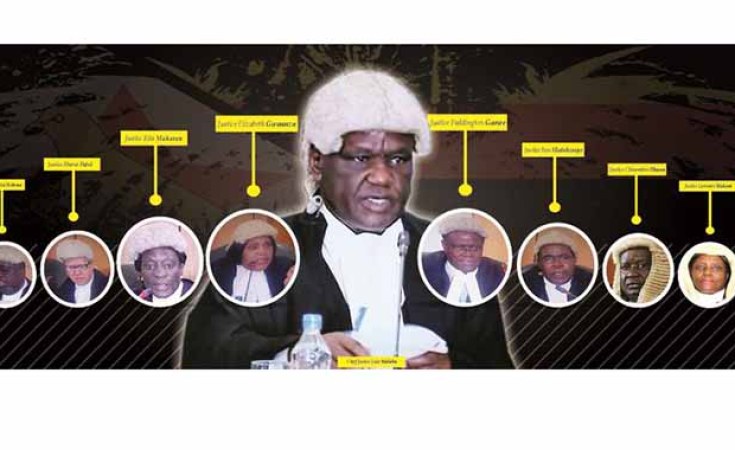 Photo: The Herald
The Constitutional Court bench of judges.
The Herald (Harare)

The Zimbabwe Broadcasting Corporation (ZBC) television was the people's favourite yesterday, as they watched a live broadcast of the Constitutional Court petition hearing in which MDC Alliance leader Mr Nelson Chamisa is challenging President Mnangagwa's victory in the July 30 harmonised elections.

From the country's oldest city of Masvingo to Harare, Bindura and Chinhoyi, among other cities and towns, it was all eyes on the small screen.

The ZBC broadcast the Constitutional Court proceedings from morning until early in the evening.

This was a first by the ZBC television, and Zimbabweans across the political divide were hooked to the live broadcast that gave them an opportunity to follow proceedings as they happened.

Chief Justice Luke Malaba announced that the court will make a ruling at 1400hrs tomorrow.

In the Central Business District in Harare, people thronged shopping malls, coffee shops and bars to watch the court proceedings.

Those who had experienced challenges at their homes headed for the city centre where power is guaranteed, to watch the proceedings.

A Harare resident, Mr Munyaradzi Makaza, said the Constitutional Court hearing was important for the future of the nation.

"These proceedings are of paramount importance to our democracy as a nation and the future of Zimbabwe lies on the Constitutional Court's verdict," he said. "It is my hope that the judges will be fair and believe me, whatever the verdict we must move on as a country."

Ms Felistas Samoyo (27), also of Harare, said she was following proceedings live because she did not trust secondary sources.

"I have been following the proceedings since morning because the social media and other sources cannot be relied on nowadays," she said. "I am dedicating my time to the court proceedings so that I am fully informed. I just pray that the outcome from all this will lead us to a better Zimbabwe."

Another Harare resident, Mr Nathan Masango (42), chose to watch the Constitutional Court proceedings in the city centre, as there was no electricity at home.

"When I left my house, there was no electricity, that is why I made an effort to get into town and watch it from my usual drinking spot," he said. "This is a day that most of us have been waiting for. We are also happy that so far there is no violence, people are following proceedings in the court peacefully."

Another Harare resident, Mr Enias Chisango, urged Zimbabweans to accept the court verdict once it is passed.

"I hope that people will be able to accept the court's ruling and be able to stay calm, maintaining the peace and focusing on the future," he said.

"Our fate is in the hands of those nine judges today. We are confident that whatever leadership is coming in, it has Zimbabwe's best interest at heart."

Our Masvingo Bureau reported that the Central Business District in the country's oldest city was deserted as people stayed at home to follow proceedings on their television sets.

"People are still talking about the ramifications of the petition and the likely verdict by the Constitutional Court."

In Bindura, scores of people thronged internet cafes, the Two Pubs at Hala Hotel and Chipadze Shopping Centre to follow the court proceedings.

So huge were some of the gatherings that they exceeded those witnessed when people watch the English Premier League, which is popular with many Zimbabweans.

Some people in Bindura complained of the big English words used by some members of the legal teams, which made it impossible for them to understand some of the arguments.

"Although we could not comprehend much of the legal jargon, we still keenly followed what was happening in Harare," said Mr John Kari. "We are part of the history making process. We are tired of the lies being peddled on social media and want to thank Government for affording us this opportunity to watch the proceedings at the Constitutional Court live. We want to move forward with our lives."

A taxi driver in the mining and farming town, Mr Noah Kambudzi, who was following proceedings from a packed Hala Hotel bar, said the lawyers for all the parties put up a good show.

"It was my first time watching a Constitutional Court hearing," he said. "I must say I was impressed by the Zimbabwe Electoral Commission's lawyer, Mr Tawanda Kanengoni, for being articulate.

"We now eagerly await the ruling on Friday. We also showed the world that we have some of the best legal brains. We now want peace to prevail in the country, with everyone working towards Zimbabwe's success."

In Mashonaland West Province, our bureau reported that it was all eyes on the television.

In Chinhoyi, people gathered in bars and hotels which dutifully tuned in to the national broadcaster, ZBC, which was granted rights to distribute the live signal for the Constitutional Court hearing.

But some complained that they could not fully comprehend the legal jargon which characterised most of the discourse.

Others were only happy to follow the historic proceedings and hoping to have them broken down by mainstream media.

Bar operators reported an increase in the number of patrons after 5pm, as many people had knocked off from work.

"We had to temporarily suspend airing of football which is our drawcard, as patrons indicated a desire to follow proceedings at the Constitutional Court," said a bartender at Muzimba Shops in Cold Stream suburb.