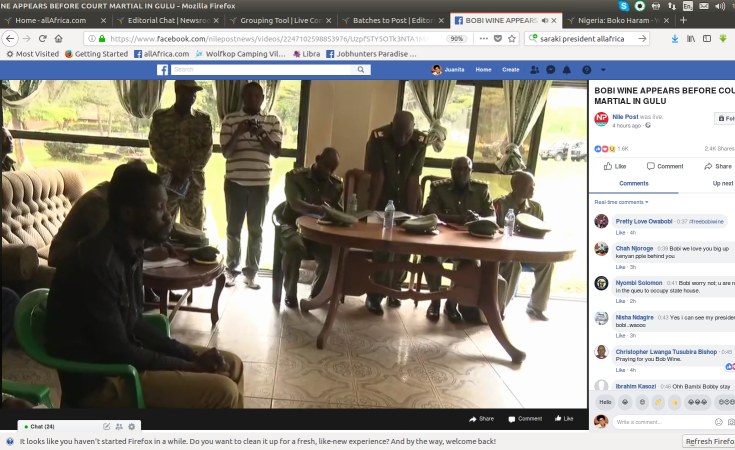 Video Screenshot
Ugandan MP Robert Kyagulanyi Ssentamu aka Bobi Wine appeared in a military court in Gulu. Those charges were dropped, but he was rearrested and then appeared in a civil court.
The Monitor (Kampala)

The Kyadondo East MP Robert Kyagulanyi aka Bobi Wine on Thursday appeared before Gulu Magistrates Court where he was charged with treason.

He was then remanded to Gulu prison until August 30, 2018 when he will appear with his co-accused.

Bobi Wine first appeared before General Court Martial that sat in Gulu where the state exonerated him from the charges of illegal possession of firearms that he had been early charged with.

"I have instructions that the proceedings before this court under Regulation 65 of the Uganda Peoples' Defense Forces procedure be terminated and the accused person be released henceforth," the army prosecutor told court currently sitting at 4th Division UPDF headquarters in Gulu.

The state revealed that they want to add him on the charge sheet of the treason case in which fellow MPs are facing before a civil court.

Bobi Wine and his co-accused who are able to, have been allowed to access medical attention in any private facility they wish to go to, under the security of the prison authorities.

Previous Story
Who Is Bobi Wine and Why Is He Creating Such a Fuss?
Next Story
How Govt Uses Treason Charge to Harass Its Opponents

Who Is Bobi Wine and Why Is He Creating Such a Fuss?

How Govt Uses Treason Charge to Harass Its Opponents