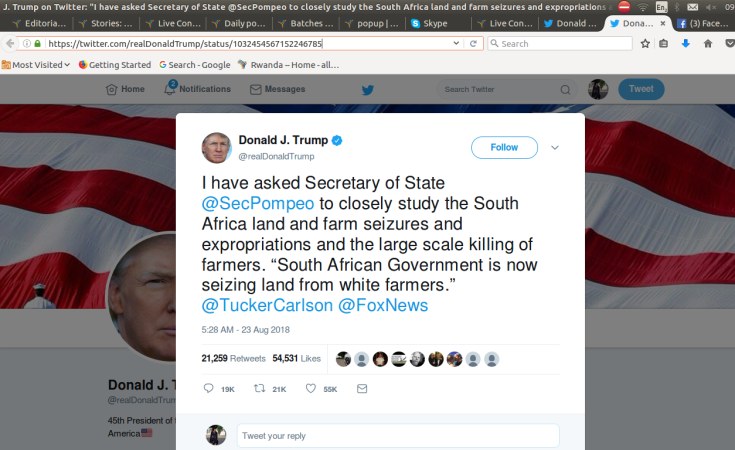 The South African government has undertaken to intensify communication about its land reform plans as the "onslaught" by those opposing also intensified, Communications Minister Nomvula Mokonyane told journalists on Monday.

Her comments came in the wake of the ongoing furore over US President Donald Trump's land-related comments.

"It is unfortunate that the first citizen of the US can say we have amended the Constitution," Mokonyane said, pointing out that she probably wouldn't have made a good diplomat.

She was addressing the parliamentary press corps on the outcome of Wednesday's Cabinet meeting. However, as soon questions were allowed, she was asked about Trump's tweet.

"I don't want to sound cynical, but Mr Trump tweeted when we were done with Cabinet," she started her answer.

She did, however, speak about the matter and said land was important for South Africa's future.

"We also take cognisance that no self-respecting nation would want things remaining as they are in our country," she said, referring to the racially-skewed distribution of land ownership.

She said the pace with which land reform happened in South Africa required a "change of gear" and that a better and faster method had to be found.

Mokonyane added that it should expand the agricultural sector and make it more inclusive.

"When a decision is made [on amending the Constitution] it will be in the interests of South Africans and those wanting to invest in South Africa," she said.

Since Parliament adopted a motion to review Section 25 of the Constitution to allow expropriation without compensation, some right-wing groups such as AfriForum and the South African Institute for Race Relations, which are funded by among others Anglo American and the Oppenheimer Memorial Trust, travelled to the US where they met with alt-right organisations and "think tanks", such as the libertarian Cato Institute, which was founded and funded by the Koch brothers, to complain about the proposed amendment.

Mokonyane said Brand SA was doing work in the US and the UK.

The message is: "We have a responsible government and we have a good intention [with land reform]."

However, there is concern about what "South Africans, who should be patriots", are saying about SA.

"Brand SA has been doing work. We need to intensify it because we can see the onslaught is intensified," she said.

She said communication would continue through the proper channels.

"We have not fallen out with anyone."

The minister added that the question they asked themselves was: "How do we tell the world of this good intention of South Africa?"

While there was concern about the right-wing groups, Mokonyane said they were heartened by the positive stance of farmer's body AgriSA.

She pointed out that Trump's tweet would not affect South Africa's relations with the US.

"The tweet has not determined our approach to the US," she said.Trump's tweet followed a Fox News report in which presenter Tucker Carlson made several false assertions about South Africa's process of reviewing section 25 of the Constitution and land reform in general.

There was also a veiled attack on former US president Barack Obama, and he called President Cyril Ramaphosa racist.

"I'm sure there will be another tweet before the end of the day."