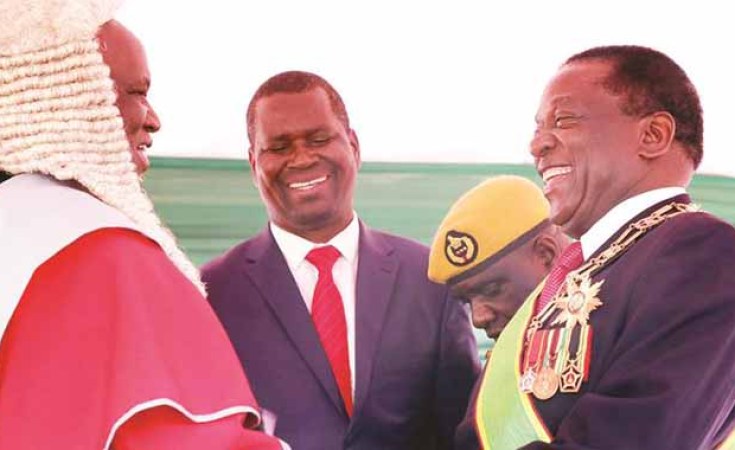 Photo: Tawanda Mudimu/The Herald
President Emmerson Mnangagwa is congratulated by Chief Justice Luke Malaba after his inauguration at the National Sports Stadium in Harare.
The Herald (Harare)
By Felex Share

Former President Mr Robert Mugabe yesterday, for the first time, endorsed and congratulated his successor President Mnangagwa on his election victory and sent his daughter, Bona, to represent him at the inauguration ceremony.

Bona was accompanied by her husband Mr Simbarashe Chikore to the ceremony at the 60 000-seater National Sports Stadium in Harare.

Mr Mugabe, who could not attend the ceremony together with his wife Grace citing ill-health, wrote a congratulatory letter to President Mnangagwa.

The President read out the letter publicly before delivering his inauguration address, much to the applause of the crowd.

"At this juncture let me read the letter I have received from our former President," said President Mnangagwa.

"Your Excellency, thank you for your invitation to me and my wife to attend the inauguration ceremony. My wife is not well in Singapore and also I am not well. So I am sending my daughter and her husband to represent us. Hearty Congratulations!"

Mr Mugabe had been bitter since his resignation in November last year after the military intervened to arrest a fast deteriorating socio-economic and political environment in the country.

He had aligned himself with MDC-Alliance in the July 30 harmonised elections, declaring on the eve of the polls that he would neither vote for President Mnangagwa nor zanu-pf.

The move drew widespread condemnation from across sectors, with most people branding Mr Mugabe a sell-out as he had spent decades denouncing MDC.

President Mnangagwa eventually won the polls, getting 50,67 percent of the total votes cast while Mr Chamisa got 44,3 percent.

While Mr Mugabe has come to terms with reality, Mr Chamisa is having difficulties in conceding defeat threatening to roll out street protests.

Other opposition political parties and some senior MDC-Alliance members are also against Mr Chanmisa's intentions.

Mr Mugabe resigned after presiding over 37 years and President Mnangagwa completed his final term before the latest polls were held.

The former President, who had been encircled by criminals in the G40 cabal, stood accused of serious misconduct inter-alia abrogating his constitutional mandate to his wife who was making utterances on business of Government and accessing classified information without constitutional authority.

Mr Mugabe was also accused of causing disaffection among the Zimbabwe Defence Forces by allowing his wife to make false and reckless allegations against them.

He also stood accused of ignoring corruption and inability to perform functions of his Office because of evident physical and mental incapacity.

Chamisa 'Not Invited' to Inauguration, Spokesperson Says President a Liar

Failed Poll Challenge Leaves Zimbabwe's Chamisa With Hefty Bill
Tagged:
Copyright © 2018 The Herald. All rights reserved. Distributed by AllAfrica Global Media (allAfrica.com). To contact the copyright holder directly for corrections — or for permission to republish or make other authorized use of this material, click here.