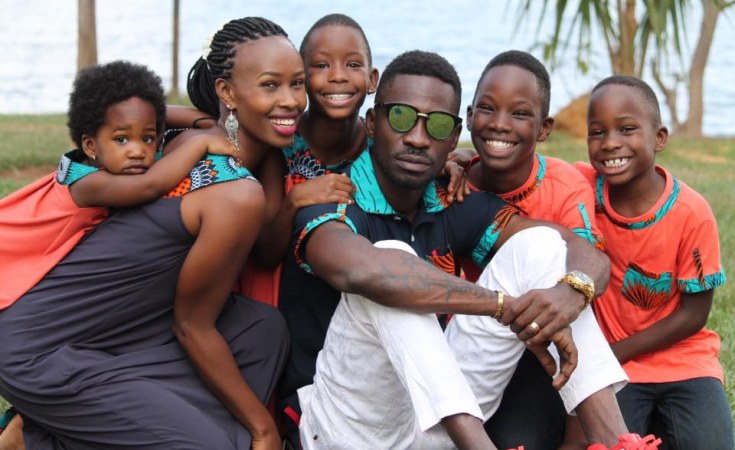 His release comes just an hour after his wife, Barbie, penned a love letter to mark their seventh wedding anniversary.

Bobi and 11 of his 32 co-accused were granted bail by the High Court in Gulu on Monday.

Bobi's wife Barbie had an hour before the release wished him a happy anniversary writing how proud she was despite spending their anniversary in the courtroom.

She wrote, "Bobi my love, today is our seventh wedding anniversary. Unlike the other anniversaries in the past, this one finds us in a court room in Gulu. It finds you in clutches, unable to walk by yourself. It finds you before a judge, making an application for you to be released on bail so that you can go for medical treatment. It finds you in physical pain. On such days in the past, we would go to the beach or somewhere across the Atlantic. We would cut cake, have some wine and celebrate with our children. But today here we are. Still not sure if you'll get your freedom or if you will be taken back to prison."

"But let me tell you this. I have never been so proud of you. I am very proud that you are not before this judge because you did anything wrong. Not because you stole public funds or killed a person. You are before the judge because of standing for what you believe in. You have always told me that your dream is to live in a country which works for all citizens. Every day, you are working towards that. Our troubles these past days are a result of that effort. What I can do is once again promise to support you every step of the way. Not because Iam your wife but also your best friend... Happy wedding anniversary my Love; FOR BETTER,FOR WORSE. IN SICKNESS AND IN HEALTH," Barbie wrote.

Ugandan MP Bobi Wine Going to UK for Treatment
Tagged:
Copyright © 2018 Nairobi News. All rights reserved. Distributed by AllAfrica Global Media (allAfrica.com). To contact the copyright holder directly for corrections — or for permission to republish or make other authorized use of this material, click here.