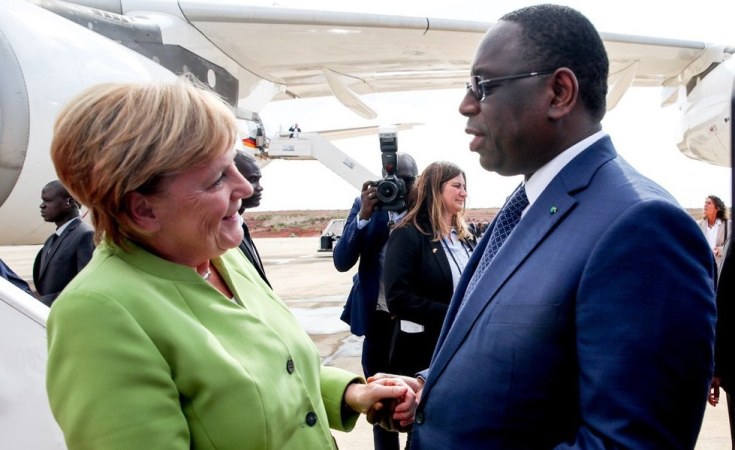 Nigeria, Ghana and Senegal are the three countries on Merkel's upcoming trip to Africa. Her itinerary is filled with business and trade meetings but migration is also expected to be on the agenda.

For Chancellor Angela Merkel, the past weeks have been Africa weeks. She first hosted leaders from Niger and Angola in Berlin and on Wednesday, August 29, she is going to West Africa herself. The official reason for her visit is strengthening Africa's economic development. "This economic outlook is crucial for most of the African countries because there are so many young people who need jobs and training," Merkel said in her weekly video podcast.

Behind the scenes, however, another topic has the chancellor on her toes. "It's obvious that migration will play an important role," says Andreas Mehler from the Hamburg-based GIGA Institute for African Affairs.

Her travel itinerary speaks for itself. Over 11,000 people from the three countries on her agenda applied for asylum in Germany in the past year. Only a fraction of the applications were approved.

Around 14,000 nationals from Ghana, Nigeria and Senegal currently live in Germany without official approval to remain. Yet deportations are difficult and costly, and according to German authorities, many African embassies are also dragging their feet over issuing passports for potential returnees. "We're pushing for voluntary repatriation rather than forced returns," Merkel explained during the Berlin visit of Ghana's president Nana Akufo-Addo in February 2018. Akufo-Addo reacted with caution. "We have to be absolutely certain that the returnees are actually Ghanaian nationals," he said.

For Merkel, the West Africa trip is another chance to bring the matter to the table. In Ghana and Senegal, Germany is already financing so-called centers for migration, jobs and reintegration. Voluntary returnees are supposed to receive advice and support upon their return. The opening of a new center is planned for Nigeria later this year.

The success of these centers is, however, limited. Very few migrants return to their countries of their own free will. The German government has, therefore, allegedly resorted to other means. According to the Nigerian government, Germany has approached them over the idea of bilateral repatriation agreements.

"They proposed the issuing of travel documents without the involvement of the Nigerian embassy," Nigeria's foreign minister, Geoffrey Onyeama, told DW at the time. The Nigerian government, however, refused the offer.

As in the past, discussion on migration between Merkel and African heads of state will probably be no easy task. In any case, the African leaders have different solutions to the problem in mind. "The easiest and fastest way to stem the tide of this migration is to improve the economy in Nigeria, and Germany can play a role," says Nigerian political scientist Garba Kare. "There are a lot of incentives in terms of trade, in terms of grants and aid and other intervention policies that Germany can give to Nigeria towards ensuring that those hundreds and thousands of people who usually flood the Mediterranean and other migrant routes are halted."

Comments from DW followers on social media express similar hopes. With over 300 comments, the topic was hotly debated on the DW Africa Facebook page. "Germany is a powerhouse of vocational and technical education. The chancellor should assist our president in strengthening that," wrote Ibarakumo B. Walson. "In Ghana, we want more technical cooperation from our German partners, " agreed Masud Issa. "German support is needed through trade and technology transfer, not aid," said Barimah Owusu-Boakye Mensah.

This is where Merkel's G20 initiative, "Compact with Africa," comes in. It plans to make African countries more attractive for private investors. Ghana and Senegal have already signed up for it and Nigeria has expressed interest. The question, says political scientist Mehler, is whether the G20 programs touch the nerve of the matter. The effects of the Compact program are expected to be more long-term solutions rather than quick fixes.

When will the German investors come?

What awaits Merkel in West Africa may therefore be the demand for more German support in bringing private investment to the continent. Germany had offered its support last year, which resulted in very high expectations from African countries. In practice these developments are much slower: German trade with Africa has grown only marginally in the past year. Additionally Germany exports more goods to Africa than it imports.

"The trade balance is still in favor of Germany," explains Garbe. In Senegal this effect is palpable. In 2017 the country imported around 117 million euros ($ 136 million) worth of goods from Germany and exported only 17 million euros worth of goods. Senegalese businessman Amacodou Diouf supplies German supermarkets with goods from his country. He doesn't believe that this trade ratio will change very soon. "To increase the trade between the two countries, Senegalese businesses need to do much more," he says.

One step towards a stronger business interest in Africa could, however, emerge from Merkel's Africa tour - a delegation of business representatives and potential investors are coming along with her.

High Hopes Ahead of Merkel's Visit

African Leaders Flock to China for Summit
Tagged:
Copyright © 2018 Deutsche Welle. All rights reserved. Distributed by AllAfrica Global Media (allAfrica.com). To contact the copyright holder directly for corrections — or for permission to republish or make other authorized use of this material, click here.

What About Africa's Informal Sector During the COVID-19 Pandemic?
Transport