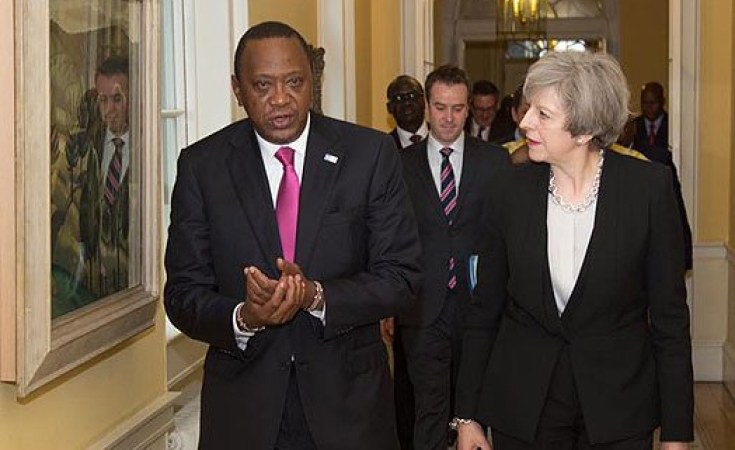 Today, unlike her predecessor the late Margaret Thatcher, UK Prime Minister Theresa May faces a very changed Nairobi as she kicks off her maiden official visit.

In Kenya, Mrs May will meet President Uhuru Kenyatta before visiting British troops and a business school. A State dinner hosted by Mr Kenyatta will conclude the trip.

"I am proud to be leading this ambitious trip to Africa and to become the first UK Prime Minister in over 30 years to visit Kenya," said Mrs May said ahead of the visit. The late Thatcher, popularly known as the Iron Lady, was the first and remains the only British prime minister to have visited Kenya in 1988.

Mrs May's visit comes at a time when British corporate giants such as Barclays, British luxury car maker Land Rover, Standard Chartered Bank, British American Tobacco and Unilever - which once straddled the Kenyan consumer goods market like a colossus - are struggling to fend off stiff challenge from the more aggressive and flexible local players.

British PM May set for Nairobi amidst Brexit turmoil

The prime minister will bring a trade delegation with her on a chartered Royal Air Force Voyager in an attempt to boost Britain's post-Brexit export prospects.

But she also comes at a time when London's influence in the economic and political sphere has been speculated to have waned.

Kenya's preference for countries in the far -east for business and development financing under retired president Mwai Kibaki's reign in power and later his predecessor President Kenyatta has dislodged European power-houses including the UK from their traditionally long-held positions as the country's leading sources of foreign direct investment.

This change in Foreign Direct Investment (FDI) pecking order has deepened in the past couple of years as the majority of developed countries - under the shock waves of debt crises - cut back on foreign investment while emerging economies scaled up their search for new business opportunities in frontier markets.

Though the many battles British corporations are fighting in Kenya may look purely commercial, keen followers of Kenya's diplomatic positioning say it partly reflects the decline in London's political influence in Nairobi that began in earnest under former President Kibaki.

China has particularly become Kenya's leading source of FDI through investment in infrastructure, a move which has continually consolidated its new-found economic clout in the country.

British companies in Kenya have hit a turbulent operating environment. Giant Unilever recently embarked on massive layoffs plan targeting 11,000 employees, the workers' union said as it announced a major battle with the company.

Kericho-based Unilever Tea, which has 16,000 employees, said the layoffs are in line with a re-organisation plan that aims to make the third largest tea company in the world "agile" in a changing business environment.

Standard Chartered Bank announced last year it would shut down four of its branches in the country. The lender said the closures are the result of a restructuring plan that has become necessary with the "current market conditions."

This came barely a week after Barclays Bank of Kenya announced closure of seven of its outlets.

British controlled beer maker East African Breweries Limited recently reported a 14.79 per cent drop in net profit in the year ended June. It made a net profit of Sh7.25 billion in the period compared to Sh8.51 billion a year earlier.

There are more than 300 British companies in Kenya and trade between London and Nairobi is currently valued at £1.3 billion (Sh130bn), according to data from the British Chamber of Commerce Kenya.

On the bilateral front, the ascendancy of Beijing to the top of Nairobi's import table has been cemented ever since; the country has maintained an East-ward view, as a casual look at major infrastructural projects shows.

By looking East, President Kenyatta's policy of economic diplomacy in the initial years of his presidency mirrored that of his predecessor Kibaki.

The Kenya National Bureau of Statistics (KNBS) data shows that China has dwarfed UK imports to Kenya over the last three decades.

Comparatively imports from China which in 1988 stood at Sh394 million have surged to Sh390 billion as at last year. Exports to China from Kenya in 1988 stood at 52.6 million and now stand at Sh9.9 billion.

Mrs May's fresh push for Britain to regain its top position as Kenya's main trading partner is not bound to be so easy.

According to International relations expert professor Macharia Munene of the United States International University, Britain's diminishing fortunes in the country is a creation of the British government itself which according to him has perpetrated frosty relations between Kenya and the UK.

"Britain has not been treating Kenya as an equal, but rather as a bully. The Chinese on the other hand have humbled themselves and it has paid off," Mr Munene said earlier.

He says, Britain and other countries in the West can bring an end to a "decade of being in the cold" as far as bilateral relations with Kenya is concerned by rethinking their foreign policy.

"They need to treat us as mutual partners and not as juniors," he said singling out the reign of former controversial British High Commissioners to Kenya Edward Clay who infamously accused unnamed corrupt officials of behaving "like gluttons" and "vomiting on the shoes" of foreign donors.

Former British High Commissioner Dr Christian Turner had earlier noted that the British government would not deal with President Uhuru Kenyatta if he was elected while still facing trial at the ICC, except on "essential business".

Kenyatta Calls For Strengthening of Kenya-Britain Trade Pact
Tagged:
Copyright © 2018 The Nation. All rights reserved. Distributed by AllAfrica Global Media (allAfrica.com). To contact the copyright holder directly for corrections — or for permission to republish or make other authorized use of this material, click here.