Kenyatta Calls for Establishment of Framework for Better Cooperation With Britain 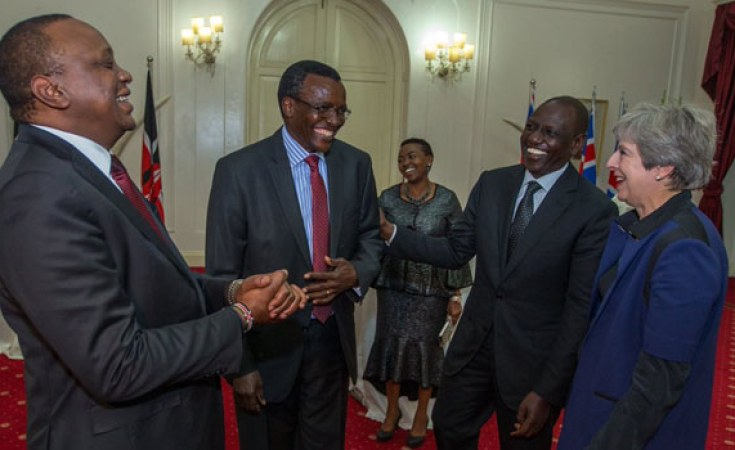 Nairobi — President Uhuru Kenyatta has called for the establishment of a new framework of cooperation with Britain as it exits from the European Union early next year.

The President observed that even though Kenya and Britain enjoy a strong relationship, there is need to strengthen the bond further by setting up a working group to lead discussions with a view of coming up with a clearer and stronger framework for cooperation between the two countries.

"I gather there will soon be changes in the United Kingdom's trading relations; I imagine that only makes the establishment of a Kenya-UK working group all the more opportune," said President Kenyatta.

The President Thursday evening during a State Banquet he and First Lady Margaret Kenyatta hosted in honour of the visiting British Prime Minister Theresa May.

The Head of State observed that Kenya and Britain should anchor on the existing strong trade and commercial ties to build an even more formidable partnership for the mutual benefit of their citizens.

"We in Kenya have settled on a new agenda, the Big Four, which prioritizes food security, affordable housing, manufacturing, and healthcare. In each of these areas, we believe, there is scope for engagement between Kenya and the UK, for the benefit of both," said President Kenyatta.

The President urged UK businessmen to go beyond the Big 4 and explore other areas of immense potential for growth in trade available in sectors such as mining, oil and gas, services and retail, tourism and hospitality.

"In short: the present value of Kenya-UK trade is nowhere near close to its full value. With your help, and with the goodwill of all here today, I look forward to raising our trade and investment to new heights," said President Kenyatta.

On her part, Prime Minister May said time has come for the two countries to forge a stronger partnership which will leave an indelible mark for current and future generations.

"While our nations have already achieved much together as friends, partners and equals, now is the moment to strengthen our relationship further," said PM May as she called for global peace and prosperity anchored on mutually beneficial partnerships.

"Let us leave the next generation a partnership even more vital than the one we enjoy today- and a world in which all our people enjoy the fruits of peace and prosperity."

The British Prime Minister further pointed out that her country is now forging a new and more globally connected future even as it exits from the European Union, noting that Kenya is a natural good destination of British investments given the already existing strong ties.