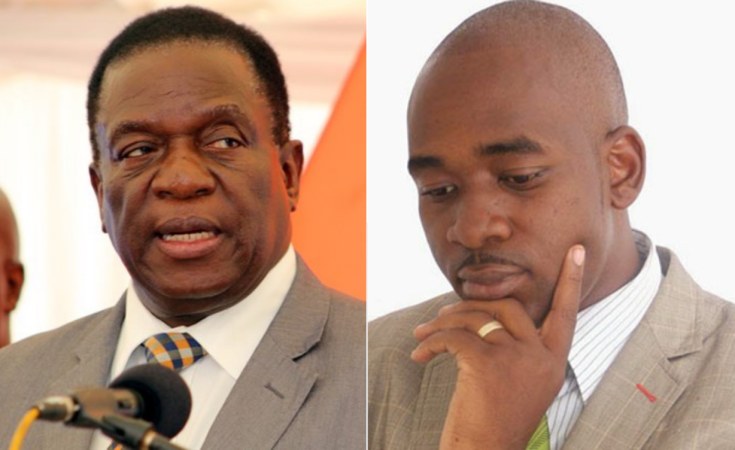 A top government official has revealed President Emmerson Mnangagwa had, up his sleeve, a pending constitutional amendment that could see opposition leader Nelson Chamisa offered government perks as leader of the country's biggest opposition in a replica of the British system.

The plan, according to the official, was aimed at pacifying a powerful opponent who feels cheated by the outcome of the just ended poll and keeps threatening to throw spanners in the wake of Mnangagwa's hopes of enjoying his rule and to remedy a devastating economic crisis.

The envisaged arrangement is modelled along the British system which creates the office of the opposition leader.

Under the plan, the opposition leader and his chief whip are pampered with government perks, aides and other mouth-watering privileges.

The arrangement, according to the official, was also enough to throw the opposition camp into further disarray as the offer could be extended to MDC Alliance co-principal Tendai Biti, who is arguably the most senior coalition leader in the just elected parliament.

Through his unsuccessful bid to land the country's presidency, Chamisa surrendered a ticket to be elected MP while his deputy Elias Mudzuri was elected Senator.

This according to the official, leaves Biti as defacto leader of the opposition.

The plan, it is further said, was still being kept under wraps in order to allow Chamisa time to pacify his restive constituency.

But the source is clear Chamisa will not refuse the offer.

"What has he ever refused? Remember he is not a rate payer," he quips, while claiming Chamisa did not have any title deeds in his name and would not refuse a government mansion offered to him for free.

Asked if the plan has been broached to his principal, Chamisa's spokesperson Nkululeko Sibanda repeatedly evaded the question but admitted his boss was keen on negotiations which he said will never be open to the public.

"The president as the winner of the last election has been authorised by the national executive to engage all stakeholders in Zimbabwe's political processes to ensure that the outcome of the election is given effect and also to ensure that the country can move forward and strengthen its democratic practices and also to make sure that we cannot continue in a culture of disputed elections," he said.

"He is going to do it judiciously, carefully, diplomatically and openly but what he is not going to do is to engage in public negotiation to the extent that that goes above and beyond the requirements of reporting back to the national executive as an when that becomes due.

"At that stage, the national executive then decides what has to be given to the media but certainly the president was given parameters and he will negotiate within the parameters."

Mnangagwa, often described as a master strategist by MDC top official Eddie Cross, has been short on talk but stronger on action.

The veteran politician is credited for presiding over a coup that deposed former President Robert Mugabe with little or no blood spilled.

Mugabe has turned around and endorsed his recent poll victory.

Before that, Mnangagwa made a surprise visit to the now late MDC leader Morgan Tsvangirai where he offered him permanent rights to the Highlands government mansion, his benefits as the country former Prime Minister as well as taking care of his medical bills.

Prior to his death February this year, Tsvangirai was reportedly bankrupt and was burdened with a giant hospital bill.

Before he mended his differences with his former allies, Tsvangirai was often the subject of repeated ridicule by an MDC breakaway group which accused him of living at the benevolence of the enemy through continued occupation of a government home.

His critics insisted this diminished his resolve to demand accountability from government as opposition chief for as long as he remained ensconced in a house that was offered by the state.

If the government plan sees the light of day, Chamisa is highly likely to walk into the trap.

Mnangagwa is keen on seeing less turbulence to his rule and has often said he was ready to steer the country away from a destructive political inclination towards an economic one.

Chamisa's continued grumbling over what he insists were rigged elections threatens that ambition.

Police, Spy Agency Accused of Sabotaging Mnangagwa Party in Polls
Tagged:
Copyright © 2018 New Zimbabwe. All rights reserved. Distributed by AllAfrica Global Media (allAfrica.com). To contact the copyright holder directly for corrections — or for permission to republish or make other authorized use of this material, click here.