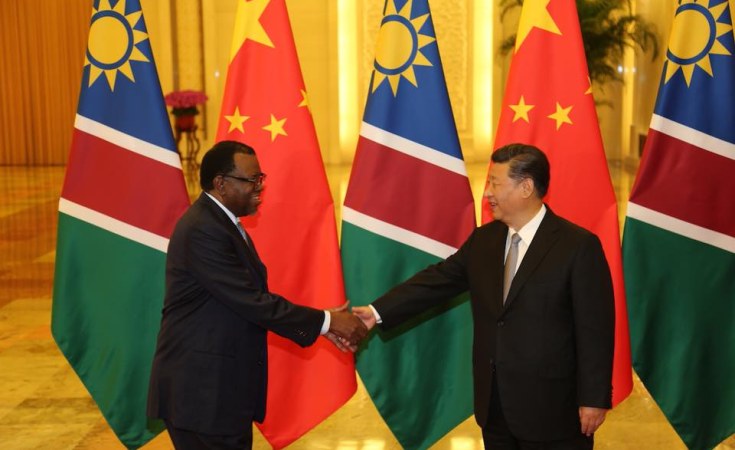 The Namibian delegation attending the Forum on China-Africa Cooperation (FOCAC) Summit in Beijing is expected to put final touches of the deal allowing China to fund the upgrades of the Hosea Kutako International Airport outside Windhoek.

President Hage Geingob, who led the delegation to the summit that ends today, said the funding agreement culminated from the agreement in March, elevating China-Namibian relations to the level of comprehensive strategic partners.

Funding for the upgrade forms part of the US$60 billion in new development financing for Africa pledged by Chinese President Xi Jinping in Beijing yesterday, despite increasing criticism of China's debt-heavy projects abroad.

Although this aid might come with economic and commercial conditions, President Xi yesterday told Geingob and his African peers that China's investments on the continent have "no political strings attached".

Geingob, speaking in China on Sunday, said funding for the airport project was coming with a five-year grace period.

It is not clear how much China has availed for the airport upgrade, but the World Bank, in a confidential report dated April 2018, estimated that government could spend anything between N$2.7 billion and N$5 billion to upgrade the Hosea Kutako International Airport.

Government previously cancelled a N$7 billion tender, awarded to a Chinese company, for the same job.

Permanent Secretary in the Ministry of Works and Transport, Willem Goeiemann yesterday confirmed to New Era that even though funds have been made available to upgrade the HKIA, the contract for the much-anticipated project was not yet awarded.

This, he said, is expected to be finalised once President Geingob returns from the Beijing summit.

Hosea Kutako is the country's international airport, originally opened in 1964 under the South African administration. During an interview with New Era in March, former acting CEO of Namibia Airports Company (NAC), which manages Hosea Kutako, said the airport was originally designed to cater for 250 people only.

The most recent NAC figures show that the airport recorded 17 306 aircraft and 938 499 passenger movements annually with 608 public vehicle parking bays.

The airport caters for international, regional, domestic and chartered flights with a fire and rescue category of 9.

Because of excessive congestion, security at the airport is deemed compromised. An audit in May found the airport wanting in many aspects and, as such, the airport's operating licence was only renewed for one month and was to expire on 31 August 2018.

A comprehensive audit by the International Civil Aviation Organisation (ICAO) is scheduled for November this year.

This week, a video recording of exhaustively long queues of mostly foreign visitors went viral on social media, with the public charging that congestion has become embarrassing for a country that prides itself as a prime tourism destination.

China now offers to fund the upgrade and expansion of the airport, at a time when Namibia strives to become a key entry point to the 300 million population SADC region.

China became Africa's largest trade partner in 2009, and the scale of bilateral trade has expanded rapidly ever since.

In the first quarter of 2018, China overtook South Africa as the largest export destination for Namibian products, making up 18.3 percent of total exports during that period, according to the Namibia Statistics Agency (NSA).

During his meeting with Geingob on Sunday, Xi said both countries needed to better align development strategies, promote infrastructure construction and production capacity cooperation within the frameworks of the Belt and Road Initiative and FOCAC.

Despite criticism against China's aid, South African President Cyril Ramaphosa defended China's involvement on the continent, saying FOCAC "refutes the view that a new colonialism is taking hold in Africa as our detractors would have us believe."

"Africa is not a zero sum game. Our growing ties with China do not come at anyone's expense," he told the summit.

Statement by President Geingob to the China-Africa Forum Dialogue

Xi Vows Action to Bring China, Africa Closer
Tagged:
Copyright © 2018 New Era. All rights reserved. Distributed by AllAfrica Global Media (allAfrica.com). To contact the copyright holder directly for corrections — or for permission to republish or make other authorized use of this material, click here.