Zimbabwe: Cabinet - 'None of Current Ministers Should Return - They Are All Corrupt' 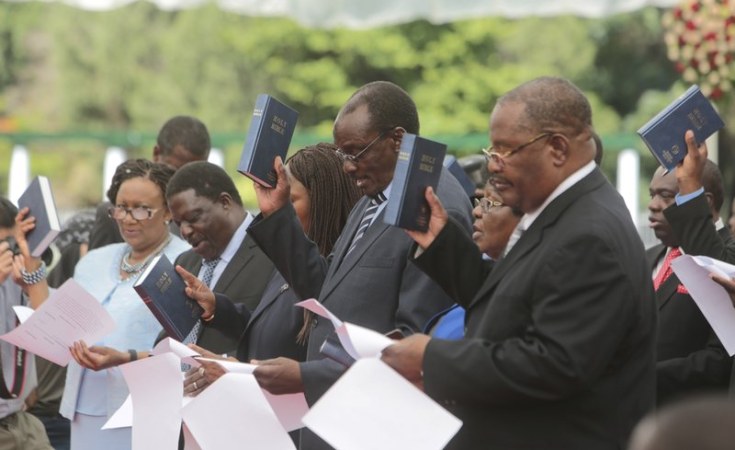 None of the current ministers should be reappointed when President Emmerson Mnangagwa picks his new cabinet if he is serious about fighting corruption, a regional anti-graft lobby group has said.

"President Mnangagwa must resist dining with individuals whose names have been fingered in corruption.

"That will also tarnish his name and government," the Anti-Corruption Trust of Southern Africa (ACTSA) said in a recent statement.

Mnangagwa's election for a full five-year-term in office was recently confirmed after the Constitutional Court dismissed opposition MDC Alliance leader Nelson Chamisa's challenge against the results of the July 30 elections.

The Zanu PF leader is expected to name his cabinet after Wednesday's swearing-in of parliamentarians and senators.

ACTSA said ministers linked to corruption scandals should not return to cabinet.

"President Mnangagwa must resist dining with individuals whose names have been fingered in corruption. That will also tarnish his name and government," the group said.

"All those whose names have been mentioned (in connection with corruption scandals) should be given an opportunity to clean themselves first before any appointment.

"As ACTSA we know that they are innocent until proven guilty; still, the public perceives them as corrupt until they also take measures to ensure that they are cleared.

"For now, President Mnangagwa must not appoint them lest his anti-corruption drive is not taken seriously."

Zimbabwe needs a fresh start in terms of public administration with all those who were part of former president Robert Mugabe's government needing to be weeded out, including district administrators (DAs) and provincial administrators (PAs).

"We deserve better people, not the same individuals who worked under Mugabe and now they pretend as if they were not responsible for the collapsed economy."

He added; "It is the contention of ACT-SA that President Mnangagwa should consider the integrity of all those he will appoint into leadership positions."

Chamisa 'Holds Keys' to Zimbabwe, Says Former Minister Biti
Tagged:
Copyright © 2018 New Zimbabwe. All rights reserved. Distributed by AllAfrica Global Media (allAfrica.com). To contact the copyright holder directly for corrections — or for permission to republish or make other authorized use of this material, click here.