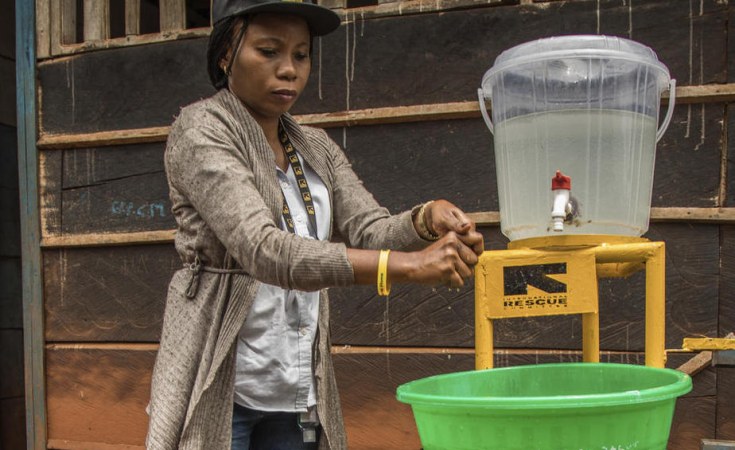 Kellie Ryan/IRC
Dr. Sylvie Musema Ngimba washes her hands with chlorine and water at Case Du Salut Medical Center where she is head medical doctor for infection prevention and control at the International Rescue Committee. She has worked to contain five Ebola outbreaks.
News24Wire (Cape Town)

At least two South African peacekeepers were reportedly wounded in a rebel ambush near the epicentre of an Ebola outbreak in the Democratic Republic of Congo (DRC).

According to Reuters, the attack occurred early this week and highlighted the challenges authorities were facing in their fight against the deadly diseases.

DRC health officials said they have made some progress in slowing down the disease after experimental vaccines were dispatched.

However, they were unsure if the situation was under control because they had challenges accessing areas.

The peacekeepers' patrol was attacked in Ngadi by militants, who were believed to belong to the Allied Democratic Forces - a Ugandan Islamist group active in eastern DRC, said spokesperson for the UN mission MONUSCO, Florence Marchal.

"Two soldiers were wounded and their condition was deemed stable this morning," she told Reuters.

According to a senior correspondent at African Defence Review, Darren Olivier, one of the South African Air Force Oryx helicopters in service with MONUSCO in the DRC, was badly damaged as it tried to evade strong ground fire.

"We’ve received reports that one of the South African Air Force Oryx helicopters in service with MONUSCO in the DRC sustained damage to its rotor blades from foliage while evading strong ground fire. The helicopter landed safely and the crew are fine, but repairs will be needed."

WHO Scales Up Response to Ebola in DR Congo
Tagged:
Copyright © 2018 News24Wire. All rights reserved. Distributed by AllAfrica Global Media (allAfrica.com). To contact the copyright holder directly for corrections — or for permission to republish or make other authorized use of this material, click here.