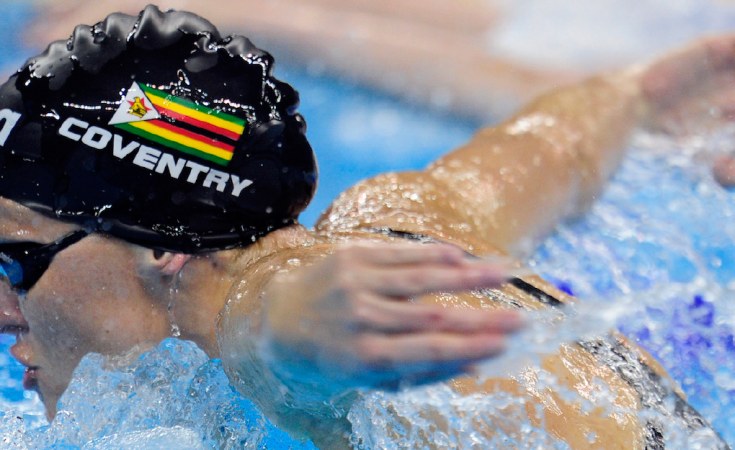 YESTERDAY marked a new chapter in the history of sport with swimming icon Kirsty Coventry being appointed Minister of Youth, Sport, Arts and Recreation.

Coventry becomes the second female to hold such a portfolio in Government after former Vice-President Joice Mujuru, who held the post in the 1980s when she was Minister of Sport, Youth and Recreation.

Zimbabwe Aquatic Union president Mary Kloppers said they look forward to a future where all sport codes get the recognition they deserve.

"As the Aquatic Union we are delighted because she comes from swimming background. . .just from what she has achieved in the sporting administrative position, in the last couple of years, we really believe she is the right person for the job and she will get things done," she said.

"This is a masterstroke, finally one of us has been appointed Minister. It's the first time l think a Zimbabwean athlete has been honoured this way.

"This is a big step towards restoring sporting pride in Zimbabwe. I really wish the Minister well and l hope this is the turning point for all national sports. She has the stature, knowledge and respect from both domestic and international spheres," said Jani.

The seven-time Olympic medallist with two golds, four silvers and one bronze retired from swimming after the 2016 Olympic Games in Brazil.

Earlier this year she was appointed chair of the International Olympic Committee Athletes' Commission.

She had been a member of the IOC Athletes' Commission since 2012.

"The Sports and Recreation Commission has received the news of the latest appointment of Hon. Kirsty Coventry with great joy and pleasure.

"This is indeed a pleasant surprise but a well-deserved appointment to one of our most distinguished sportspersons in the name of Kirsty Coventry," said SRC corporate communications officer Tirivashe Nheweyembwa.

ZIFA, led by their president Philip Chiyangwa, joined the rest of the associations in congratulating Coventry and pledged their support.

"The Zimbabwe Football Association president, Philip Chiyangwa, the Executive Committee, the Council and the Secretariat would like to take this opportunity to congratulate Honourable Kirsty Coventry on her appointment as the Minister of Youth, Sport, Arts and Recreation .

"We will give her all the necessary support as she settles into her new role and we believe she has the capacity to deliver without any doubt," said Chiyangwa.

Polo Association of Zimbabwe chairman, Bob Crossley, said they were hopeful of the future.

"I have known Kirsty a long time, she is very capable person. She has been involved as we all know in the IOC, the Olympic Committee and she is highly rated over there and she has always been very supportive of sport in Zimbabwe."

Zimbabwe Olympic Committee president, Admire Masenda said with her experience as an athlete and administrator, she has an insight of what needs to be done.

Chamisa Under Fire Over Jibe Towards Zimbabwe's Coventry
Tagged:
Copyright © 2018 The Herald. All rights reserved. Distributed by AllAfrica Global Media (allAfrica.com). To contact the copyright holder directly for corrections — or for permission to republish or make other authorized use of this material, click here.