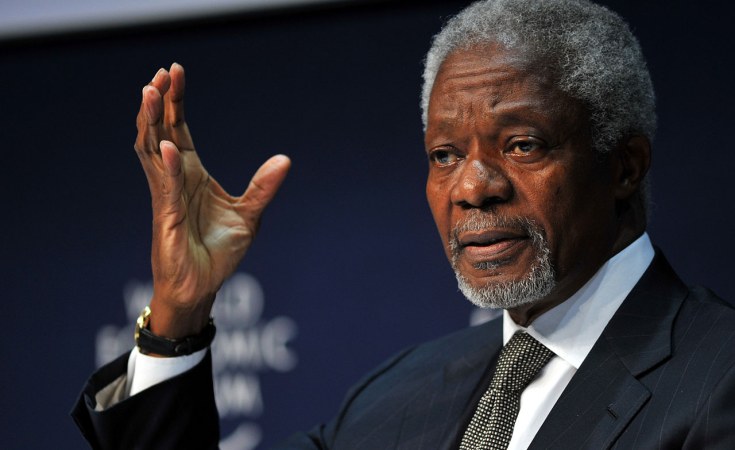 Yet Ghana mourns another outstanding personality, a pioneer, a unique leader with great influence. He was a son, lover, a Parent, a Statesman, a Diplomat, a Democrat, a peace maker, a negotiator, and most of all, a mediator. He understood the importance of peacebuilding, cooperation between people, nations and the international community.

He was a treasure to Africa and beyond who was easily remembered when discussions on conflict resolution, management and transformation, because his inputs, decisions, analyses, interpreting conflict, paramount to ensuring human security and peace in Africa, Middle East and Western And United States came up.

H. E. Kofi Atta Busumuru Annan, born on the 8 of April 1938 at Kumasi in Gold Coast (Ghana),The MP to the family of Henry Reginald Annan and Madam Victoria Annan. Mr Henry was half Asante and half Fante, while Madam Rose was Fante, however, Kofi Annan's twin sister Efua Atta died in the year 1991.

Kofi Annan had his early education at Mfantsipim Methodist Senior Secondary School at Cape Coast in the Central Region of Ghana in 1957, which happens to be the year Ghana gains independence from the British Colony.

He furthered his tertiary education at Kumasi College of Science and Technology, now Kwame Nkrumah University of Science and Technology in 1958, where he read Economics. He completed his undergraduate studies at Macalester College, United States, in St. Paul, Minnesota. From 1961-1962, he had his Postgraduate Degree in International Relations at The Graduate Institute of International and Development Studies in Geneva, Switzerland.

He also took part in the SLOAN FELLOW PROGRAMME, and obtained a master's degree in Management at the MIT Sloan School of Management from 1971-72.

Kofi Annan began his career with the World Health Organization (WHO), an agency under the United Nations(UN), in 1962, as a budget officer. He then took a short break and came to Ghana to worked as the manager of Ghana Tourist Development Company in Accra from 1974 - 1976, while in 1980, he became the head of personnel of the UN High Commission for Refugees (UNHCR) in Geneva.

Kofi Annan was recommended by the Security Council as Secretary-General of UN in 1996 and he started his official duties from January 1, 1997 to December 1, 2006.

His Other missions included Addis Ababa, Cario, Ismailia(Egypt), Iraq. He engaged in Hostage negotiations, and subsequently led the UN to negotiate with Irag on possible sale of oil for purchase of humanitarian aid.

He served on different board of trustees such as Macalester College in St. Paul, Minnesota, Institute for the Future in Menlo Park, California.

In 2001, Mr Annan received the Noble Peace Prize by Nobel Committee for his efforts in revitalizing the UN and his fight to make the world more peaceful.

Mr Annan was involved in the smooth Democratic transition from Military to Civilian rule in Federal Republic of Nigeria in 1998. He supported East Timor for its Independence from Indonesia. He also mediated between Nigeria and Cameroon in 2006 over dispute on the Bakassi Peninsula in New York. He supported sending UN Peacekeeping Mission to work with the Sudan government in 2003, to fight rebel groups.

He again chaired on The Elders; an international non-governmental organization of public figures, working together for human rights issues and global peace.

As a champion of peace of Peace and a motivator, the Ghana Armed Forces in 1998 name the International Peacekeeping Training Center after him, thus, the Kofi Annan International Peacekeeping Training Center (KAIPTC), and as such he partnered the KAIPTC to established the West Africa Commission on Drugs (WACD) to address the growing drugs menace in West Africa.

He was appointed chancellor of University of Ghana, Legon, from 2008-2018.

Kofi Annan was noted for his selfless way of life, his love for transparency, honesty, truth has given hope and to many in Africa and rest of the world.

His legacy and achievements would continue live on and inspire many generations to come, for he lived and work for world peace through out his life.

He was an advocate of human rights and believes in universal values of equality and fought to bring the UN closer to the grassroots people by helping through humanitarian activities such the Kofi Annan foundation, creation of the Global Fund to fight HIV/AIDS, Malaria among others..

"Gender equality is more that a goal in itself. It is a precondition for meeting the challenge of reducing poverty, promoting sustainable development and building good governance". Kofi Annan

May his Gentle soul rest in peace. 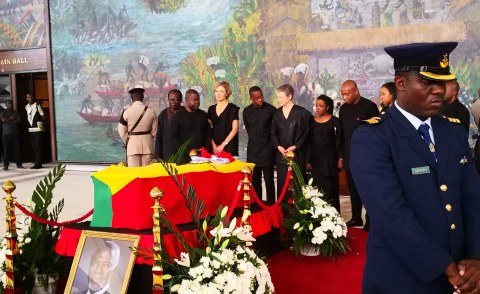 Kofi Annan's Moving Burial in Accra
Tagged:
Copyright © 2018 Government of Ghana. All rights reserved. Distributed by AllAfrica Global Media (allAfrica.com). To contact the copyright holder directly for corrections — or for permission to republish or make other authorized use of this material, click here.