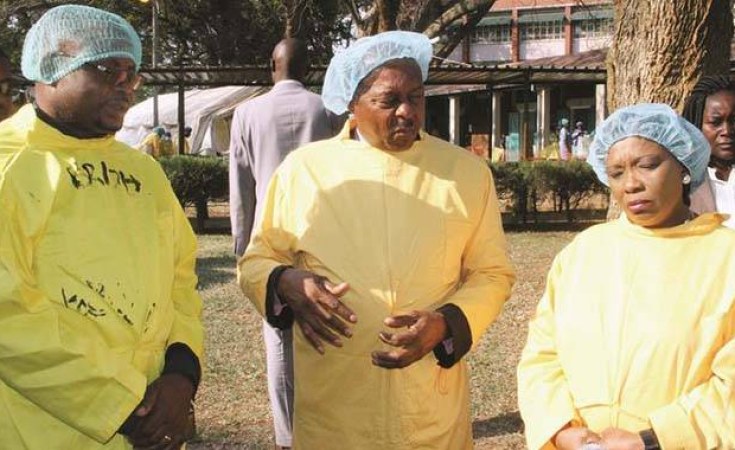 Government has declared the cholera outbreak in Harare a state of emergency as numbers of people dying or falling sick from the bacterial infection rise. By mid-morning yesterday, 20 people had been confirmed dead from the latest cholera outbreak.

Over 2 300 suspected cases have been recorded in Harare alone.

Isolated cases have also been reported in Masvingo, Manicaland, Midlands and Mashonaland Central provinces, all traced back to Harare as the epicentre.

Addressing journalists after visiting Beatrice Road Infectious Diseases Hospital, one of the treatment camp sites in Harare, Health and Child Care Minister Dr Obadiah Moyo said declaring the outbreak an emergency allowed the State to quickly mobilise resources to contain the disease, adding that Harare was the source of all cases reported countrywide.

"We are declaring an emergency for Harare. This will enable us to contain cholera and typhoid in the city as quickly as possible. We do not want further deaths, so if we do not create this disaster emergency situation, we will continue losing lives."

Dr Moyo took a swipe at Harare City Council which he said had failed to attend to sewer bursts in Glen View for the past two months, resulting in the contamination of boreholes.

"Someone slept on duty and this is one of the problems we must tackle as Zimbabwe. People must work. This whole problem is a result of blocked sewers and these were reported, but were never repaired for at least two months. Now we have the whole of Glen View and Budiriro being affected," said Dr Moyo.

He said while he would seek audience with Local Government, Public Works and National Housing Minister July Moyo on a permanent solution to these recurrent challenges, they had agreed with Harare Mayor Herbert Gomba to immediately clear all sewer blockages.

Dr Moyo said they were also clamping down on illegal food vending with the assistance of the police.

He said development partners were assisting with provision of water bowsers, medical supplies and other non-food items.

"We have a problem, which has to be solved. We need to improve services so that we stop the number of people dying from cholera. There must not be deaths at all," he said.

Mayor Gomba, who accompanied the Minister on his tour, pledged to fight the outbreak.

"For instance, for us to collect garbage, we need refuse trucks but we are failing to get foreign currency from the Reserve Bank of Zimbabwe to get our refuse trucks, which have been in South Africa for the past 10 months," said Mayor Gomba.

He said Government must also prioritise construction of Kunzvi and Musami dams to complement available sources of water for Harare and neighbouring towns.

Asked why the outbreak was spreading so fast both in Harare and across the country, public health specialist Dr Prosper Chonzi said there was a slow response by health officials to the first reported cases.

"The reason why it is spreading so fast is that they delayed in picking it up. Cases were picked up when people had already died and funerals held without supervision," saaid Dr Chonzi.

"Mourners conducted the same rituals that we practice as Africans such as shaking hands, washing the body of the deceased and so forth and they went back to their homes. Again no follow-ups were done, resulting in the bacteria spreading," said Dr Chonzi.

He said cases were picked up when people had already died.

Dr Chonzi said there was also a possibility that all ground water in Glen View area, where sewerage has been flowing for the past two months, was contaminated with faecal matter and therefore unsafe for drinking.

"We need to appreciate the mode of transmission of cholera. It is faecal orally transmitted, which means faecal matter would have found its way into the oral cavity of a human being," he said.

"The natural habitat of cholera and typhoid is sewer. So if sewer finds its way into food or water, people will definitely get the disease," said Dr Chonzi.

"Right now, I think underground water in Glen View and Budiriro is totally contaminated with salmonella and vibrio (bacteria that causes cholera). So people drawing water from boreholes or shallow wells are drinking water that is already contaminated and will definitely get the disease," he said.