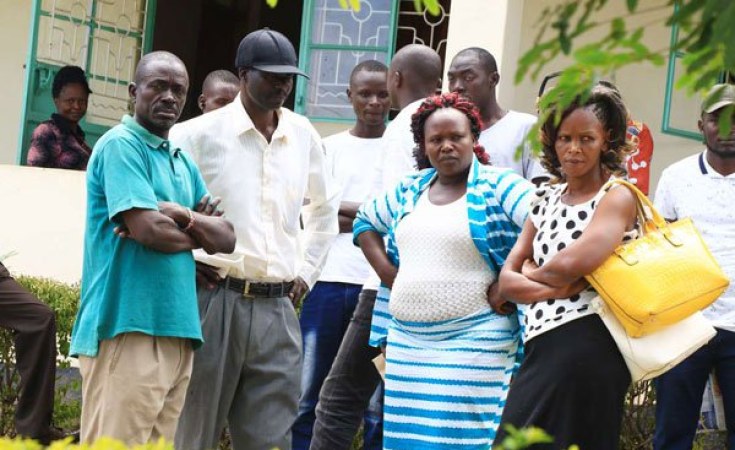 Benson Momanyi/Daily Nation
Sharon Otieno's parents Douglas Otieno (in black cap) and Melida Auma (second right) with their relatives at Homa Bay where Migori Governor Okoth Obado's personal assistant Michael Oyamo was to be arraigned over the abduction and murder of their daughter in the picture taken on Tuesday September 11, 2018.
Capital FM (Nairobi)
By Ojwang Joe

Kisumu — Migori Governor Okoth Obado was being questioned at the Nyanza regional DCI headquarters Tuesday morning as part of investigations into the death of Rongo University student Sharon Otieno.

Obado was accompanied by two lawyers, among them Cliff Ombeta.

DCI Director George Kinoti told Capital FM News that officers were keen to establish if Obado was involved in any way over the murder.

Also with detectives was Nation journalist Barrack Oduor who implicated the governor in the murder of the university student who was abducted and later killed.

Both the governor and the journalist did not speak to journalists as they made their way into the DCI regional headquarters.

Obado's PA Michael Oyamo is in court over the murder, after the journalist told police that he is the one who lured them to abductors.

Homa Bay Senior Resident Magistrate Lester Simiyu directed that Oyamo be remanded at the Homa Bay Police Station until Tuesday when he will be presented in court.

Simiyu told the prosecution that it is a violation of the suspect's rights to be kept in police custody without preferring charges since his arrest on Tuesday last week.

The court also directed that only three people will be allowed to have access to the suspect in the police cell.

Simiyu ruled that Oyamo's Brother George Oyamo and two of his lawyers should be granted access to the suspect.

The prosecution led by assistant director of public prosecution Tom Imbali had asked the court to grant them more time since they were still collecting more evidence.

Obado Quizzed, Unlikely to Spend Night in Cell as PA Moved to Nairobi