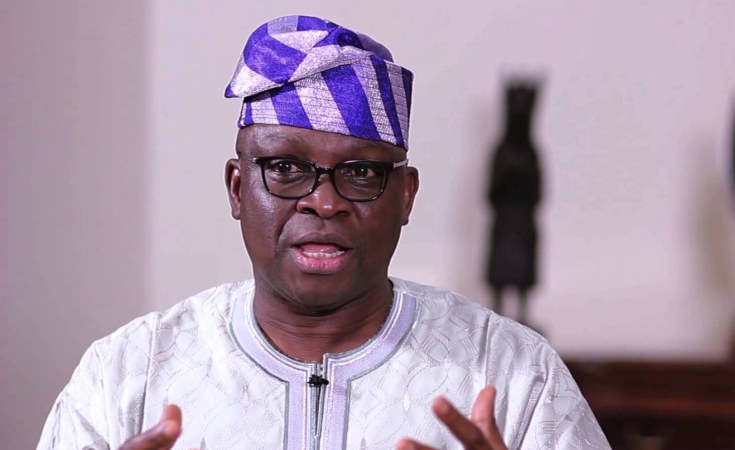 The anti-graft agency said in the September 12 letter that Ayo Fayose poses a flight risk and may leave the country via land borders, airports or even seaports.

Mr Fayose will complete his second four-year term as Ekiti governor on October 16.

Ibrahim Magu, acting chairman of the EFCC, told the Customs headquarters in Abuja Mr Fayose is under probe for conspiracy, abuse of office, official corruption, theft and money laundering.

The NCS consequently notified all its commands and formations across the country of the request and recommended immediate and strict compliance in a September 14 memo.

Both letters, which PREMIUM TIMES obtained on Sunday, became public a day after Kemi Adeosun left Nigeria as she faces 14 years imprisonment for admitting her youth service scheme certificate was indeed forged as reported by PREMIUM TIMES.

Mrs Adeosun, who resigned on September 14 as Nigeria's finance minister, is said to have departed Nigeria the next morning to be with her mother and children.

She is a British citizen, and the Nigerian government has not given any indication it intends to prosecute her.

The moves by federal authorities to tighten surveillance around Mr Fayose came as the governor was making public appeal to the EFCC that he would turn himself in for probe after leaving office.

The governor recently wrote the anti-graft office, saying he would be available for questioning in the afternoon of October 16, when he would hand over power and consequently lose immunity from criminal prosecution.

Apparently aware of the moves by EFCC, Mr Fayose released a statement Sunday evening, ridiculing the agency as being wayward and reiterating his firm opposition to the Buhari administration.

"EFCC, when a woman is being brought to you as a wife, you don't have to peep through the window to see her.

"As I said in my letter, Insha Allah, I will be in your office on October 16, a day after the expiration of my tenure.

"EFCC putting my name on watch list after notification of my coming is not only political but petty. I'm not among those who are afraid to face tomorrow. Nobody is God.

"I will remain in PDP not minding their intimidation," Mr Fayose said.