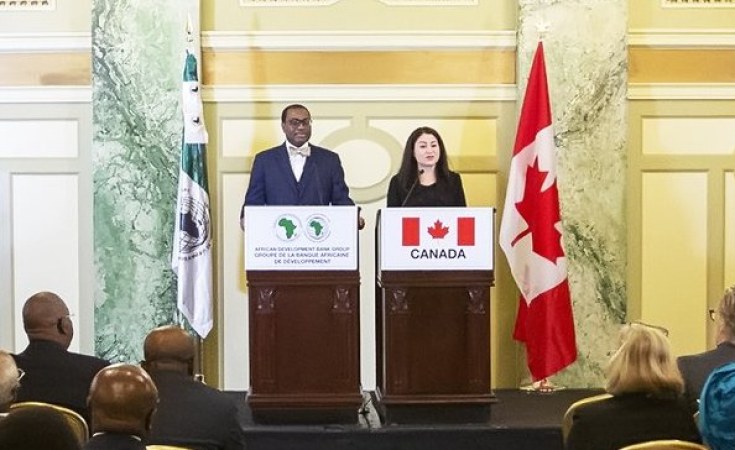 Photo: AfDB
On the sidelines of the World Bank-IMF Spring meetings, Maryam Monsef, the Canadian Minister of International Development and for Women and Gender Equality, announced Canada's $1.1 billion commitment in temporary callable capital to support the African Development Bank. The announcement was made a day after a meeting of the Bank's governors in Washington D.C. to continue discussions on a 7th General Capital Increase.
Content from our Premium Partner
African Development Bank (Abidjan)

"No country can possibly move forward in the 21st century if it leaves half of its talent on the sidelines," African Development President, Akinwumi Adesina told delegates at the launch of FinDev Canada, in Montreal, while making the Bank's case for supporting women.

FinDev Canada is a subsidiary of Export Development Canada (EDC), the country's export credit agency. Launched six months ago, FinDev's mandate is to support the growth and sustainability of businesses in developing markets.

According to Honourable Marie-Claude Bibeau, Minister of International Development, "With its universities, international organizations and multicultural population, Montreal is the ideal home for FinDev Canada. From its Montreal base I am confident it will play a critical role in advancing our country's international development agenda by offering a blend of public and private capital and building partnerships with businesses in developing countries, especially those operated by women and youth."

Adesina gave the keynote address at the inaugural conference.

"All of us in this room understand the need to support women instinctively. Many of us have come from places - and have family in places - where the labor of women is absolutely essential to holding communities together. And yet so often, their labor is not even fully recognized. And all too often, women are denied their fair share of wages for equal work," he said.

According to Adesina, the challenge was not just in Africa or even in North America. "In every society, this challenge represents a truly foolish squandering of resources."

The status quo that must change

The President of the African Development Bank called for an end to the status quo on gender as women and youth are the backbone of countless small businesses. "All too often, women are denied their fair share of wages for equal work. The status quo must change. "We know that investing in women can create a true multiplier effect in communities. Women reinvest up to 90% of their income on their families and in their communities. That money goes toward feeding and educating children, and paying for doctor's visits." 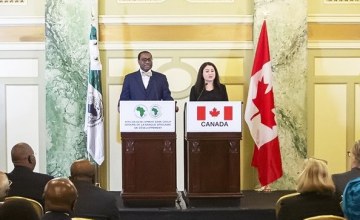 On the sidelines of the World Bank-IMF Spring meetings, Maryam Monsef, the Canadian Minister of International Development and for Women and Gender Equality, announced Canada's willingness to temporarily increase its callable capital at the African Development Bank (AfDB) by up to US$1.1 billion, should it be required. Through this commitment, Canada is supporting the negotiations of the African Development Bank's Seventh General Capital Increase. The announcement was made a day after a meeting of the Bank's governors in Washington D.C. to continue discussions on a Seventh General Capital Increase.

Adesina urged partners to work strategically, innovatively, and collaboratively to bridge the estimated $42 billion financing gap between men and women. "While societal limitations and belief systems often kill many a woman's dream, it is often at the bank counter that dreams come crashing down. Without collateral and without access to land or other financial resources, the bank is the end of the road for many women entrepreneurs," he deplored.

Montreal is the first stop of President Adenisa's four day working tour in Canada. The Bank's President is leading a delegation along with David Stevenson, Executive Director at the Bank representing Canada, China, Republic of Korea, Turkey and Kuwait. Other senior members of the delegation include Stella Kilonzo, Senior Director of the Africa Investment Forum; Vanessa Moungar, Director for Gender, Women and Civil Society; Timothy Turner, Group Chief Risk Officer, and Victor Oladokun, Director of Communication.

Before his keynote address at FinDev, President Adesina held bilateral talks with Paul Lamontagne, Managing Director of FinDev Canada. Later in the day, in Ottawa, Finance Minister, Bill Morneau and the Bank delegation are expected to exchange views on a number of issues including inclusive growth, and Canada's leadership on innovative finance mechanisms for development. The delegation will attend a dinner hosted by Minister Bibeau, where gender, climate change, and renewable energy, will top discussions.

Adesina is expected in Toronto on Wednesday and Calgary on Thursday, for the third and final legs of his four-day working visit in Canada.

Canada has been a full member of the African Development Bank (AfDB) since January 1983 and has contributed to all General Capital Increases since joining the Bank. Canada is the 4th largest contributor to the Bank among non-regional members. As of 31st December 2016, its capital subscription to the Bank was over $3 billion.