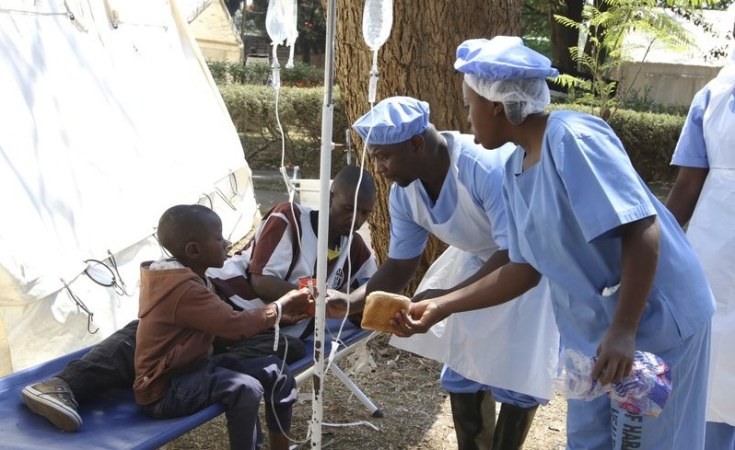 Harare has been hit by a deadly cholera outbreak, the death toll has surpassed 30 with over 5000 cases reported.

On 12 September 2018, the newly appointed Minister of Health Obadiah Moyo toured the Beatrice Road Infectious Diseases Hospital where he was quoted blaming the City of Harare for the epidemic.

The Minister accused the Council for not delivering on its mandate to provide services such as water and sanitation.

These utterances by the minister were not only out of order but misplaced and betray the Government's lack of commitment to availing resources to urgently address this public health crisis.

It is public knowledge that it was the ZANU PF government which launched an attack on the city of Harare and indeed the local government architecture in 2004 when they summarily dismissed then elected Executive Mayor Engineer Elias Mudzuri and replaced him with the Sekesai Makwavarara led Commission. Following Mudzuri's dismissal, ZANU PF went further to amend the Local Government Act and removed the Executive Mayor's position.

This greatly curtailed the powers of councils in delivering on their mandate as suddenly bureaucrats had more power than elected officials. Needless to say, that the bureaucrats, especially in Harare, were often ZANU PF appointees and state security agents. This directly meant that service delivery would suffer as the management was hostile to progressive policies proposed by the elected representatives.

Prior to usurpation of powers of Councils by Central Government via the removal of elected Executive Mayors, in 1997 ZANU PF had appropriated all water rights to the Zimbabwe National Water Authority (ZINWA) which meant that any water related projects had to be approved by ZINWA and its parent Ministry.

These two major events and also the continuous meddling in council affairs by the Ministry of Local Government set the ground for collapse of service delivery. With the economic collapse as the common denominator of this crisis, service delivery in Harare was set for collapse.

As part of expanding Harare's water supply given the fact that the city was growing rapidly, the MDC led Council had proposed the development of water works at Kunzvi and Musami dams to supply the city. Africa Development Bank had agreed to fund the project with a concessionary loan to the city.

On sewer reticulation, the MDC executive mayor led Council had a blueprint to replace the archaic pre-independence sewer system with a modern system which would last a further hundred years. All these plans suffered at the hands of ZANU PF parochial politics and corruption.

The sabotage by ZANU PF through covet and overt tactics thus created a roadmap to the current unfortunate crisis of cholera which has become an annual event since its worst outbreak in 2008 when over 4000 people died.

To exacerbate the already precarious situation in Harare, ZANU PF went on to subvert council procedure on housing. This was done through a tag team partnership between the Ministry of Local Government and Ministry of Small to Medium Scale Enterprise and Cooperative Development which authorised ZANU PF linked land barons to grab land everywhere in the name of housing cooperatives.

The elected officials watched in horror as residential stands were parcelled anywhere including in wetlands and even on top of sewer pipes. Unplanned settlements mushroomed across the City without a plan as how water and sanitation would be availed. Further to that, economic hardship increased rural-urban migration which saw the city population explode while the water resources dwindled.

Given the old infrastructure which had not been replaced since the 1940s, bursts and leaks in the water and sewer reticulation system became frequent hence water shortages. The City struggled to provide services as most rate payers defaulted due to the economic collapse engineered by the incompetence and corruption of the central government. In any event, the central government is the biggest debtor to the city and has not paid a dime in over a decade in some cases.

The 2013 Constitution provide for Central Government to remit 5% of revenue collected back to local authorities. This had not happened hence the city struggles to fund new projects such as increasing the fleet of refuse collection trucks.

Further to this the current epidemic can also be attributed to the Commission clandestinely set up by ZANU PF 2 months ago which did not prioritise water and sanitation. Further, the current dire foreign currency shortages have also added their toll as local authorities can not obtain the hard currency to purchase water treatment chemicals from the Central Bank.

It is therefore clearly misplaced for the government to now make a volte farce and want to accuse the hard-working elected representatives for the mess facing the city. This cholera outbreak is squarely at the feet of government and they must carry it.

In the same vein we hope that the Central Government will respect the provisions of the constitution and set up provincial and Metropolitan Governments so that they preside over their localities.

The new Mayor of Harare is a progressive and experience leader who needs to be given his space to deliver. His mandate is clear and his enthusiasm and vision is there for all to see hence the government must keep its dirty hands off him!

Pride Mkono is an organiser with #Generational Consensus and a Mandela Washington Fellow. He writes here on his own capacity.

Zimbabwe's Rich Spitting in the Face of the Poor?
Tagged:
Copyright © 2018 New Zimbabwe. All rights reserved. Distributed by AllAfrica Global Media (allAfrica.com). To contact the copyright holder directly for corrections — or for permission to republish or make other authorized use of this material, click here.