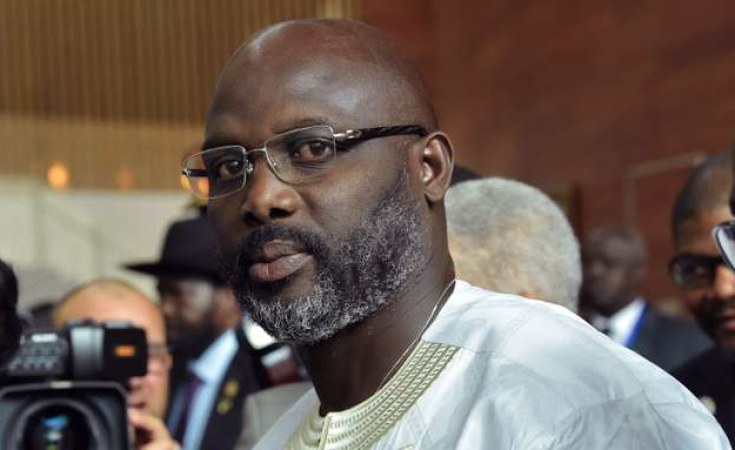 Le Pays
President George Weah is reported to have asked the FBI in the U.S. to investigate claims of missing banknotes.
Liberian Observer (Monrovia)

Former President Ellen Johnson-Sirleaf has expressed strong dissatisfaction over what she says is the manner in which her successor, President George Weah, is attempting to draw the previous administration into the muddy waters of the ongoing "missing" L$16 billion controversy, the Voice of America (VOA) has reported.

According to the VOA, Madam Sirleaf spoke exclusively to Rodney Sieh, publisher of the FrontpageAfrica newspaper, via mobile phone on Tuesday, September 18, and broadcast on Wednesday, September 19, 2018.

Sieh told the VOA that Madam Sirleaf suggested a sinister play was in the works to "impugn her legacy and her administration." Impugn means to speak harmful untruth about someone in order to dishonor or humiliate them.

Madam Sirleaf added, "I have been reliably informed that the Central Bank of Liberia has undertaken an internal investigation, and by a directive from the Minister of Justice provided a full report to the police.

The CBL has prepared a release that gives full evidence and clarification that refutes the statement of Minister of Information Eugene Nagbe. This had been held for two days, because the CBL Governor and the Minister of Justice have refused to approve the release. It is most unfortunate that the government would give false information that wickedly impugns the reputation of past officials and, by extension, the country itself."

In the last few days, two key officials of the George Weah-led Coalition for Democratic Change (CDC) government have emphatically declared that the previous government is responsible for the "missing containers," which had allegedly contained L$16billion stashed in several bags.

Justice Minister Frank Musa Dean, in a statement on Monday, September 17, declared that the previous administration of President Sirleaf was responsible for the missing containers.

"Once the evidence is made clear that the previous government has maintained its integrity on this matter, I request Deputy Governor Sirleaf to resign immediately," Madam Sirleaf said of her son Charles, a longtime CBL executives at the bank.

But according to Minister Dean, "initial findings indicate that the container and bags of money allegedly arrived between November 2017, prior to the inauguration of the current government, and August 2018. Evidence available to the investigative team has established that the current administration was not informed about the arrival of the containers and bags of money into the country", the Minister said.

Dean's statement was repeated on Tuesday when Minister Nagbe told the VOA Daybreak Africa that the current government was not in the loop (to furnish someone with sufficient relevant information and include them in the decision-making process) on the money or the container.

According to Nagbe, in November 2017, the investigation determined and confirmed that a batch of banknotes was brought into the country -- just before President Weah assumed office.

"Now, when the president received information about these newly-printed banknotes, he sanctioned an investigation, which is being chaired by the Ministry of Justice, the Financial Intelligence Unit (FIU), and other security apparatus. The idea is to understand how much money came into the country, how much was ordered, how much was printed, which country printed the money, and how did it affect the country's foreign exchange situation," he said.

"We can confirm that the money was brought through the Freeport of Monrovia and the Roberts International Airport and for now we can confirm that the amount was L$16 billion. An estimate of a little over US$60 million as far as we have concerned from ongoing investigation as of today, and it came in the two ports of entry," Minister Nagbe confirmed.

As for Madam Sirleaf, she revealed that she would ask her son, Charles Sirleaf, a veteran of the CBL, to tender his resignation and leave his post at the bank in protest over the manner in which she is being treated by the Weah Administration.

"Once the evidence is made clear that the previous government has maintained its integrity on this matter, I request Deputy Governor Sirleaf to resign immediately," the former President said. It can be recalled that in 2009, former CBL Governor Joseph Mills Jones had advanced a request to the Legislature for authority to print an additional 170 million new banknotes but the request was met with resistance from a number of legislators, amongst them, former Lofa County Senator Sumo Kupee, then chairman of the Senate Committee on Banking and Currency, who argued that the printing of new currency banknotes was illegal.

But CBL Governor Mills Jones at the time told journalists in Monrovia on Tuesday, October 29, 2009 in Monrovia the bank had done nothing covert or illegal about the printing of the new bank notes. He was reported to have said that even though the Constitution gives the legislative branch the power to issue currency and mint coins, the act establishing the Central Bank relegated such function to the bank. But Senator Kupee said he did not believe the Governor.

But Governor Jones at the same news conference told journalists that the government printed the new notes not to flood the market but to replenish its operational vault at the bank. Jones also reportedly said there was nothing illegal about the printing of the new bank notes, although he never disclosed just how much was actually printed.

In 2016, the idea once again surfaced with another request from the CBL to print 50 million in new banknotes. This was reinforced with a letter from President Sirleaf in March, 2016, requesting the Legislature to authorize the printing of 50 million new Liberian dollar banknotes. But like before, in 2009, some members of the House of Representatives expressed opposition to the idea.

Former Representative Edward Forh (CDC-District # 11 Montserrado County) who spoke against the decision for the printing of additional bank notes was thrown out of session on the order of then Speaker Alex Tyler who strongly supported President Sirleaf's request. Representative Forh was accused of attempting to disrupt session after expressing strong view against the President's request for the printing of new bank notes.

The former representative at the time said, "The Speaker and his LPDP in collaboration with some elements of the Unity Party have agreed and decided a need to print more money to fund their campaigns. We thought that by printing more money, it will escalate the already depreciated Liberian Dollars that has gone to the rate of ninety-one to one US dollars".

Forh also claimed that the Committee, without any reliance, declared that the vault of the Liberian dollars at the CBL was empty and therefore wanted to print the amount of fifty Million dollars without telling the people of Liberia the amount of mutilated banknotes that need to be replaced.

But former President Sirleaf, in a communication dated Thursday March 3, 2016, had informed the Lawmakers that she received two letters from the Central Bank of Liberia advising that the economy would have been gravely affected by the lack of local currency to meet National needs. Her first letter dated December 23, 2015 was sent by the then Executive Governor and the second of such letter dated February 19, 2016 was sent by the Acting Executive Governor Mr. Charles Sirleaf.

But it can be recalled that the CBL's announced decision in 2016 to replace mutilated banknotes with new ones howbeit, with different and new features raised questions from lawmakers who contended that the printing of new banknotes with different features and colors indicated that such was tantamount to the introduction of a new currency. Moreover they argued that the CBL's non-disclosure of the amount of currency notes it was planning to printing was not only suspicious but sinister as well.

According to observers, current developments concerning the disappearance of containers of printed banknotes appear to have confirmed the worst fears of those who, at the time opposed the printing of new banknotes on grounds that the CBL had failed to disclose the true amount of local currency it was printing and the denominations in which they were being reproduced.

Further, according to observers, neither former President Sirleaf and her officials nor President Weah and his officials can rightly defer culpability for the printing and disappearance of the notes, according to documents in possession of this newspaper.

'Missing' Billions - Who is Telling the Truth?