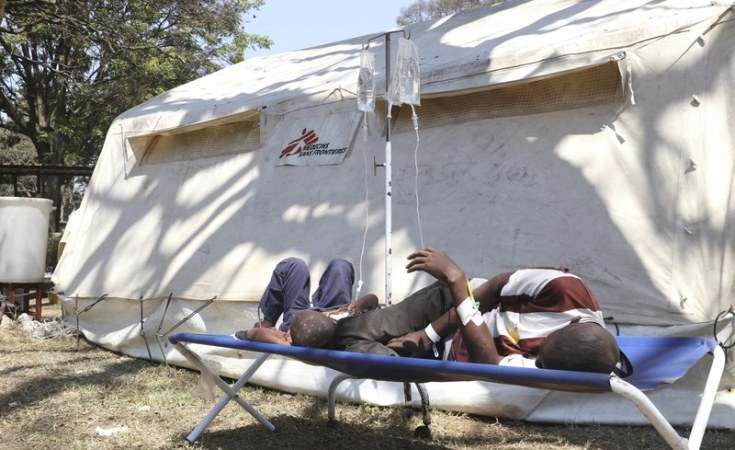 Finance Minister Mthuli Ncube Wednesday announced government still had a funding shortfall of $35.1 million from a budgeted total $64.1 million required to fight the current cholera outbreak that has claimed over 30 lives mostly from Harare.

He was briefing the media while receiving private sector donations towards the controversial initiative.

The Treasury boss said over half of the required budget was still to be mobilised.

"To date, we have received $15.7 million from the government of Zimbabwe and $13.3 million from development partners and the private sector.

"Resources mobilised to date of $29 million fully cover the requirement of $25.4 million."

Ncube noted that in terms of response areas to be covered by the fund, case management and infection prevention has a funding gap amounting to $14.7 million, water and sanitation ($4.5 million), Health and Hygiene Promotion ($1.2 million) while risk assessment in hot spots $14.7 million.

Ncube said that cabinet has established an inter-ministerial committee to spearhead implementation of short and long term measures.

It is made up of Ministries of Local Government, Health, Finance, Energy, Tourism, and Lands.

"The private corporate sector, development and social partners, individuals including Zimbabweans in the diaspora are being called upon to provide both financial and non-financial assistance towards responding to the cholera outbreak," he said.

Ncube was asked why government sought funding from elsewhere when it was spending lavishly on expensive cars for Ministers and MPs.

He responded, "The $15.7 million we received from government is a result of cuts in expenditures to prioritise the cholera fight.

"The remaining funding gap is within the long term and this concept of crowd funding is not new. It was used in the United States soon after the September 11 bombing.

"This makes it a voluntary mechanism to allow the members of the public to donate."

Bulawayo Free From Cholera as 16 Cleared of the Disease

Govt Scrambles to Contain Cholera As Death Toll Rises in Zimbabwe
Tagged:
Copyright © 2018 New Zimbabwe. All rights reserved. Distributed by AllAfrica Global Media (allAfrica.com). To contact the copyright holder directly for corrections — or for permission to republish or make other authorized use of this material, click here.