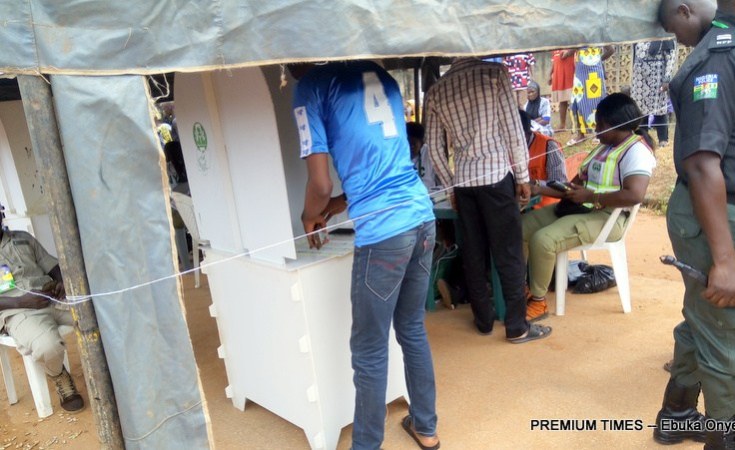 Photo: Premium Times
Voting in the Osun governorship election, which was declared 'inconclusive' by INEC.
This Day (Lagos)
By Deji Elumoye

Abuja — Senate President Bukola Saraki has disagreed with the Independent National Electoral Commission over its declaration that Osun gubernatorial election results were inconclusive.

Saraki, in a statement he personally signed on Sunday as Chairman of the Peoples Democratic Party presidential council on Osun governorship election, expressed concern over the decision by INEC to declare as "inconclusive" an election in which a candidate won the highest number of votes and fulfilled the condition for geographical spread.

He posited that INEC was wrong in declaring the election as inconclusive because the votes in certain polling units were cancelled "as the decision of INEC to cancel the election in those areas after voting had taken place means INEC had already excluded the votes in these areas from the election process and therefore those units should have no place in the overall results.

"My opinion would have been different if the election in the affected units did not take place at all, may be as a result of malfunctioning of the card reader machine or unavailability of the electoral materials. Since the voting took place and was cancelled, only the courts could reverse the initial decision by INEC to cancel the votes in these areas.

"That is why I call on our party and its candidate to seek further legal interpretation on this decision by the electoral body. One cannot but wonder whether if the places were reversed and the candidate of the ruling All Progressives Congress (APC) is the one leading in the election, the INEC will take the same decision it has taken now.

He therefore called on INEC to display courage, boldness, independence, neutrality and patriotism so as to send signals to the world at large that Nigerian electoral system has come of age and that the nation's democracy has matured.

According to him, INEC should note that the Osun gubernatorial election is not only about that South-western state but about Nigeria as the entire world is watching.

"Our national interest is at stake. The integrity of our electoral system is at stake. The reputation of the electoral body is at stake. The future of our democracy is on the line. The way INEC conclusively handles the Osun election will determine global expectations from our political process. It should therefore ensure that the wish of the Osun State electorate eventually prevail."

Saraki lauded the dedication and hard work of PDP supporters and the candidate of the party, Senator Ademola Adeleke, " who have remained steadfast, resilient, focused and determined."

He also commended the other contestants in the Saturday's election for their gallant efforts because it is clear they are all working for the same objective from different perspectives and platforms to ensure that the era of mis-governance, pain, injustice and insensitivity to the plight of the common people comes to an end.

The Senate President reminded PDP supporters and the people of Osun State that the INEC decision constitutes only a delay of the victory of Senator Adeleke and the PDP in Osun Gubernatorial election, "as our triumph will come either through the judiciary or a further balloting."

"I thank PDP supporters and the general public in Osun State and note that we got to this point after many months of hard work, determination and focus. We should not despair and not lose our focus and determination to ensure that the final results reflect the will of the Osun people," he said.

Nigeria Opposition Party Sure of Osun Governor Win, Goes to Court
Tagged:
Copyright © 2018 This Day. All rights reserved. Distributed by AllAfrica Global Media (allAfrica.com). To contact the copyright holder directly for corrections — or for permission to republish or make other authorized use of this material, click here.