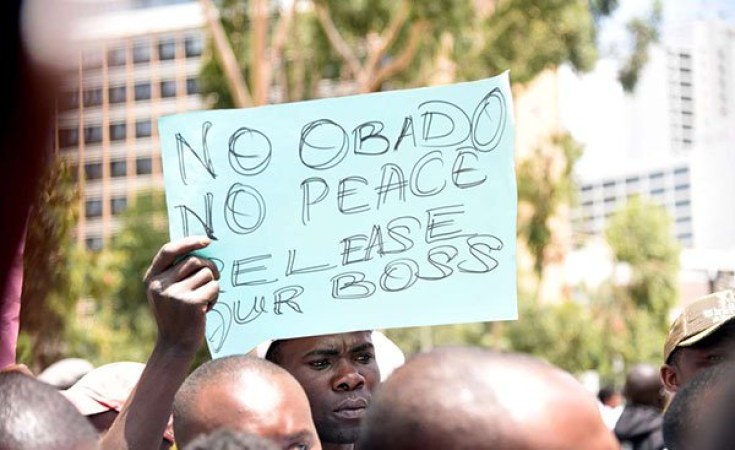 He sat calmly, occasionally chatting with his lawyers Nicholas Ombija and Evans Ondieki as he waited to plead to murder charge.

Wearing a dark blue suit, a white shirt and a matching tie, Migori Governor Zachary Okoth Obado was at the High Court in Milimani by 8am but was kept waiting until 9am, when the court sat for the business of the day.

But even then, Mr Obado and his advocates were informed that the case had been pushed to 11am, and his supporters were ordered out of the courtroom for other cases to proceed.

A few minutes to 11am, Mr Obado was brought back and his supporters jostled with court orderlies to be allowed into the packed courtroom.

A few managed to enter but most of them were locked outside. Hundreds others, waving placards, sang outside the Milimani Law Courts.

When Justice Jessie Lessit entered the courtroom, Mr Ombija, a retired judge, introduced three other advocates who were acting on behalf of Mr Obado.

The prosecution had Assistant DPP Jacob Ondari and Tom Imbali on the opposite side.

Justice Lessit then read the charge and asked the governor whether he had understood it, to which Mr Obado replied, "Yes".

"Is it true or not true?' the judge asked. "It's not true," Mr Obado answered.

Through Mr Ombija, Mr Obado applied to be released on bail or bond, pending the trial.

Mr Ombija said he has filed the application for bail and served it to the prosecution.

In the application, Mr Obado said he is not a flight risk, and will not interfere with the witnesses or any other matter being investigated by the police.

In an affidavit filed by Mr Roger Sagana, Mr Obado said the offence of murder is bailable under Article 49(1)(h) of the Constitution.

He said the governor has a qualified constitutional right to be released on bond on reasonable conditions, and that he has a right to be presumed innocent until the contrary is proven.

"The applicant will present himself to court as of and when required, until the matter is concluded. He will abide by any conditions that shall be set by the court," the application read.

Mr Ondari told the court that the prosecution needed time to respond to the application and that another matter against Mr Obado's personal assistant, Mr Michael Juma Oyamo, is coming up tomorrow and the two issues should be mentioned together.

Mr Oyamo was taken to court on September 9 and the charge read to him but he was not required to plead. The prosecution was granted 14 days to continue holding him and complete the investigations.

Mr Obado said he has co-operated with the investigators. The charge stated that Mr Obado, with others not before court, murdered Sharon Belyne Otieno.

He allegedly committed the offence between September 3 and 4 at Owade in Rachuonyo, Homa Bay County. Among those present in court were Sharon's parents - Mr Douglas Otieno and Ms Melinda Auma.

Tears kept rolling down Ms Auma's cheeks as relatives wiped them away. When the matter was concluded, relatives helped her out of the courtroom.

Justice Lessit adjourned the matter to this afternoon awaiting the hearing of bail application.

The Judge rejected an application by Mr Ombija for the governor to be taken back to Gigiri police station and ordered that he be remanded at Industrial Area.

Mr Obado was arrested on Friday and spent the weekend in police custody.

Previous Story
Next Story
Governor Obado Arrested, to Be Charged With Murder of Sharon

Governor Obado Arrested, to Be Charged With Murder of Sharon