President Mnangagwa says foreign direct investment will play a key role in Zimbabwe's quest for middle income status by 2030 and Harare will accelerate the pace of its robust global re-engagement to attract FDI, including resolving a decades old diplomatic standoff with the United States.

He made a special plea for investors from the US to explore the array of investment opportunities in the Southern African country, which is seeking a fresh start by charting a different but progressive path for sustainable economic growth after nearly two decades in the doldrums.

Addressing delegates during the Zimbabwe Investor Forum in New York at the Weekend, President Mnangagwa said the forum provided an opportunity for his administration to interact with business people from the US to explain investment prospects and opportunities in the country.

He said his new Government was determined to build a new, open and prosperous Zimbabwe by pursuing a robust global engagement and re-engagement policy with all countries for mutually beneficial outcomes.

"As such, Zimbabwe stands ready to enhance and improve economic relations as well as welcome investments from the United States," said President Mnangagwa, who took over the reins in November last year following the resignation of ex-leader Mr Robert Mugabe.

"At the time I took over, on November 24 last year, per capita income was $900, now, which is eight months' time, it has risen to $1 200 and by 2030 I believe it should reach $3 500 with increased investment, decent jobs and broad-based empowerment; free from poverty and corruption by 2030.

"We are fully cognisant that FDI will play a major role in the attainment of this noble vision hence we invite investors amongst you to travel this journey with us," President Mnangagwa said.

"On the political front, we successfully held our harmonised elections as scheduled on July 30, 2018, which were peaceful, free, fair and democratic. We are thus determined to further entrench democratic tendency and constitutionalism and tolerance for the good of our people to ensure sustainable development and prosperity for our people," he said.

The President said the growth of trade and investment was expected to drive Zimbabwe's development agenda, and the country "stands ready to enter a new era of relations with the US and pursue economic cooperation and further reignite mutually beneficial trades and cooperation between our countries".

Economic and political relations between Harare and Washing reached their lowest ebb in 2001 after Zimbabwe embarked on the land reform programme to give land back to the landless black majority. The US reacted by passing legislation prescribing a host of sanctions, which played a significant role in bringing the once vibrant domestic economy to its needs over just about eight years.

"The onus is now on the private sectors of the two countries to complement my Government's efforts in this drive to grow the economy. To date one of the key reforms that we have implemented is the amendment of the (51 /49 equity holding in favour of locals) indigenous and economic empowerment law.

"Let me assure you that all foreign investment will be safe in Zimbabwe, and foreign investors are free to repatriate their investment proceeds in accordance with our laws," the President stressed.

"My administration has designated both commodity specific and geographical areas as special economic zones with favourable incentives for investors. I'm therefore inviting American businesses to invest in these zones and we stand ready to facilitate such investments.

The President said the enactment of Zimbabwe Investment and Business Facilitation Bill and establishment of one -stop-shop- centre to give greater impetus on commitment to open up the economy.

"Furthermore my Government is reforming the public sector to eliminate bureaucratic red tape and bureaucratic bottlenecks and enhance efficiency and responsiveness," the President added.

He said his Government will ensure policy clarity, consistency, transparency and predictability.

He pledged to make Zimbabwe an attractive and safe investment destination.

Country Re-Awakening From Its Tourism Slump 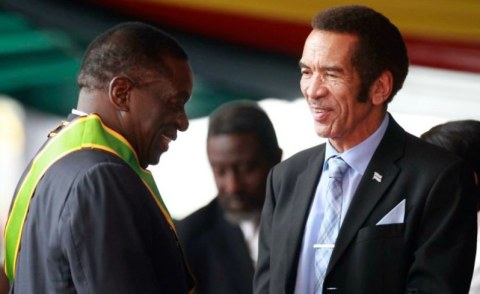