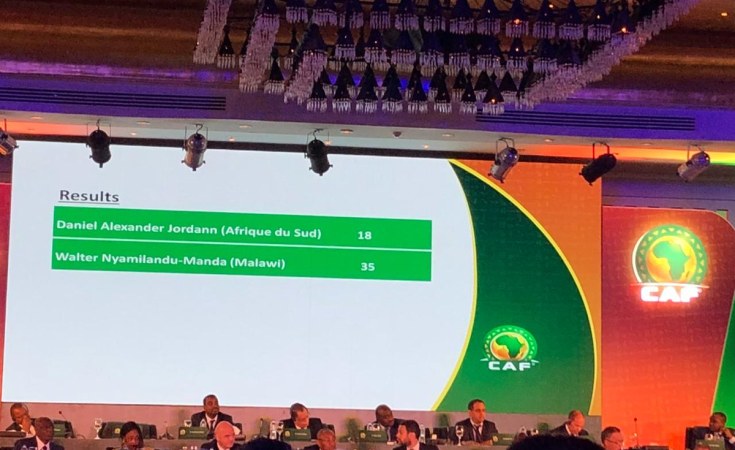 Photo: @CAF_Online/Twitter
Walter Nyamilandu got the nod after two rounds of voting. The Malawian polled 35 votes against 18 by Danny Jordaan of South Africa.
Confederation of African Football (Giza)

The 12th CAF Extraordinary General Assembly on Sunday, 30 September 2018, in Sharm El Sheikh, Egypt, was highlighted by key decisions with the climax being CAF's endorsement of a second term for FIFA President Gianni Infantino.

The tenure of the FIFA President ends next June, but CAF President Ahmad Ahmad in his welcome address appealed to delegates to throw their weight behind the former for another term at the helm of world's soccer governing body.

"I profoundly announce that CAF will support (Gianni) Infantino for another term", the CAF President told the delegates, and called on the president of the Royal Moroccan Football Federation (FRMF) Fouzi Lekjaa, who doubles as CAF 3rd Vice President to formalize the support.

"On behalf of my colleagues, I gladly announce that the delegates (present here) are in support of second mandate for FIFA President Gianni Infantino. You (Infantino) have shown great commitment to the activities and development of African football, and we would like to give you more time to further your reforms," Lekjaa declared to a resounding applause from fellow delegates.

"CAF needs a new dimension to regain the values of Africa," he said whilst regretting the performance of African teams at the FIFA World Cup Russia 2018, where none of the five teams (Egypt, Morocco, Nigeria, Senegal and Tunisia) made it past the group stage, the worst performance the continent's representatives in more than decades.

He also called for support to Lydia Nsekera, FIFA Council member, who has declared her intentions to contest for the presidency of the Association of National Olympic Committees of Africa (ANOCA).

Filled with emotion, FIFA President Infantino said "the support for another term means a lot to me", whilst pledging more support for the African confederation.

"Africa is the future. FIFA is committed to developing Africa's passion for football via the FIFA Forward so the game can reach its potential in each African nation & everyone who wants to take part can do so without barriers.

"I'm happy and proud that CAF embraced VAR. It shows that CAF is in line with modern trends of football. VAR did not change football; rather VAR has helped football and referees," Infantino said.

Another important item on the agenda of Extraordinary General Assembly was the election of African representative to the FIFA Council for the Anglophone Linguistic Group to replace Kwesi Nyantakyi (Ghana) who resigned last June. Malawian Walter Nyamilandu got the nod after two rounds of voting. The Malawian polled 35 votes against 18 by Danny Jordaan of South Africa. Tanzania's Leodegar Tenga dropped out after first round of voting with 14 votes, against 23 for Nyamilandu and 16 for Jordaan. Two other candidates Elvis Chetty (Seychelles) and Nick Mwendwa (Kenya) withdrew before voting.

Also present was the Egyptian Minister of Youth and Sports, Ashraf Sobhy, who reiterated the support of the host Government towards the activities of CAF.

Tagged:
Copyright © 2018 Confederation of African Football. All rights reserved. Distributed by AllAfrica Global Media (allAfrica.com). To contact the copyright holder directly for corrections — or for permission to republish or make other authorized use of this material, click here.