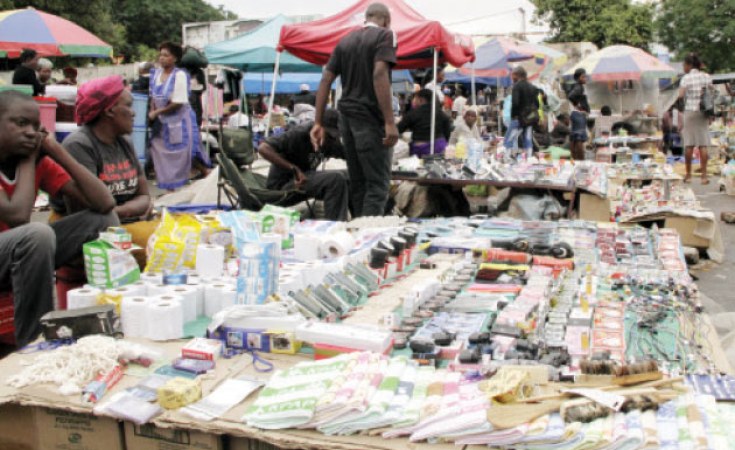 The Herald
Vendors in Zimbabwe.
The Herald (Harare)
By Golden Sibanda

Government has reviewed tax for all electronic transactions from 5 cents per transaction to 2 cents per dollar with both monetary and fiscal authorities commending the new system, which now captures the entire previously untaxed $7,5 billion informal sector, as more progressive.

Former MDC parliamentarian Eddie Cross said in February a levy on electronic money transfers, which has become the dominant transacting method due to cash shortages, could help Government tax the thriving informal sector.

The Treasury and monetary bosses said the tax system was progressive as it reduced the tax liability from low value transactions. Prof Ncube also said the new tax will help expand the tax collection base.

Analysts, however, said the new tax system was tantamount to a tax increase given the shortage of cash in the country, which compels the vast majority of people to use electronic modes of payment for transacting.

This is because paying 2 cents for every dollar effectively means one loses 2 cents in every 100 cents transaction and by the time one transacts to a value of say $1 000 they would have cumulatively lost or paid $20.

The value of electronic transactions amounted to a $65 billion in the first six months of this year, and analysts think the new tax system is designed to increase revenue to Treasury, including by capturing the informal sector.

An enigmatic puzzle many have struggled to prove or disprove, is from a study carried out with the help of the World Bank, which said Zimbabwe had an estimated 5,7 million micro to medium enterprises, which do not pay taxes.

It was estimated, in the 2016 study, that the sector generates about $7,5 billion, which circulates outside the formal banking system. Estimates also say 90 percent of Zimbabwe's 16 million population is not formally employed.

With Government committing to austerity measures to curb fiscal disequilibrium, which saw budget deficit hit $2,52 billion in 2017, the new tax may significantly shore up State coffers and help Treasury to live within its means.

"I believe that we can cover the shortfall in our revenues," said Mr Cross, a former MDC legislator and Bulawayo based economist, while submitting recommendations by Parliament's Committee on Budget and Finance.

"We can provide more money for our health sector; we can fund the Parliament of Zimbabwe properly if we put a small tax on electronic transfers. If we put 5 percent, five cents in a dollar on that, it is $9 billion of new revenue."

Mr Cross said the total value of electronic transfers in 2017 amounted to $180 billion.

However, the central bank chief sees the new tax approach through different lenses, after he said levying 2 cents per dollar would be light on one's pockets for small value transactions, hence it was progressive.

Dr Mangudya said the previous taxation system was in a way regressive in that for every transaction, regardless of whether it was big or small, the public had to part away with a significant amount of 5 cents.

"What I can say is that for small purchases, which are small transactions, it is an improvement because (for instance) bread costs a dollar or $1,10 and you charge 5 cents, it becomes regressive policy.

"And if you put 2 cents, which is 2 percent of every dollar you are now paying 2 cents instead of 5 cents (per transaction)," he said.

Minister Ncube concurred with the governor saying the tax system aligned with the now prevailing way of transacting in Zimbabwe, which he said reflected financial deepening of the domestic market.

"Two cents per dollar transacted, that is much more progressive than before because what it means before is that whether your transaction was $1 you would pay 5 cents whether its $5 million you still pay 5 cents.

"So clearly, that is unfair and that is regressive and this is a much better system, it is progressive, it is line with expenditure in terms of value, it's a fairer system. I do not think it is going to increase the tax levels at all.

"The current proposal is progressive, this is linked to value. For small purchases in terms of denominations, this is quite progressive because in a sense you are paying a percentage of the size of your transaction.

"It is much fairer and it includes all electronic transactions because, let's be honest, the ATM has migrated from the wall to where you used to place your card to your mobile phone," Minister Ncube said.

The finance chief said the previous arrangement had become ineffective and it had become important to move in the direction of technology driven innovations and prevailing ways of doing business.

Economist Andy Hodges said while there were significant positive takeaways from the Governor's monetary policy statement and the finance minister's fiscal roadmap issued on Monday, the 2 cents tax system was essentially a tax hike.

"What is bad for us is the issue of mobile payments because for every $1 000 you spend you are paying $20. I understand that Government needs to widen its tax base, however, that affects us ordinary Zimbabweans when making mobile payments," he said.

"People are saying now, look, if we want to use cash we cannot find it, so we are actually stuck with mobile payments and that way we are going to have to pay more, but I think the minister and reserve bank had to do a balancing act," he added.

Finance Minister is Robbing Poor to Fund the Elite - Opposition