Cameroon Separatist - 'I Don't Call Myself a Fighter, I Defend Myself' 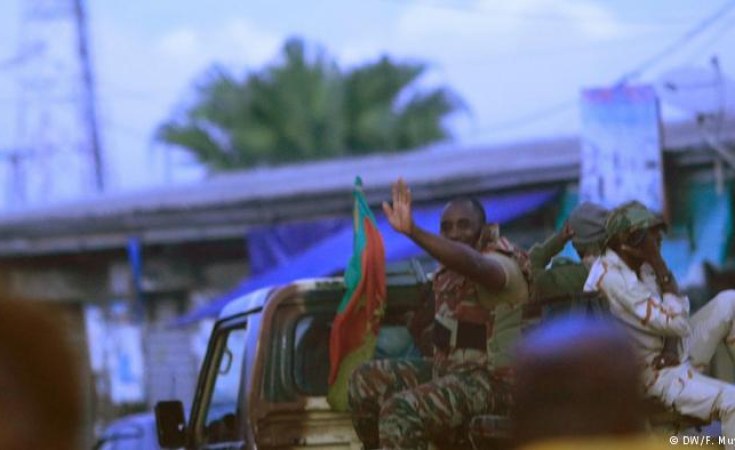 Fred Muvunyi/Deutsche Welle
Voting has closed in Cameroon despite low a turn-out up in Buea, the capital of the southwestern region.
Deutsche Welle (Bonn)
interview

On Sunday Cameroonians will go to the polls. But in the English-speaking regions voting is nearly impossible. DW spoke to three anglophone separatist fighters about the longtime ethnic conflict's effects on society.

It took a long time before the three agreed to a meeting. We meet at a hotel in Nigeria, a few kilometers from the border with Cameroon. The separatists seem nervous. In January 2018, the leader of the movement, Ayuk Tabe, was arrested at a hotel in the Nigerian capital, Abuja, and later handed over to Cameroonian authorities.

The three men all belong to different fighting groups. They introduce themselves as Cobra, Catongo and Motia Esomba.

DW: Why did you join the separatist movement?

Cobra: I don't call myself a fighter - I defend myself. I didn't go through any training to become a fighter. In September, an officer in the town of Mamfe shot a boy. I was there - it was a peaceful protest. Just because you have no other option, you have to fight.

DW: What did you do before this?

Catongo: I was a businessman.

Cobra: I was a farmer and a trader.

In October 2016, lawyers from the anglophone regions took to the streets. In November, a teachers strike and further protests followed. The government ignored their demands and cracked down on the protests. Several protesters lost their lives, many were imprisoned and the internet was shut down for three months. An armed resistance movement emerged and they not only wanted equal treatment, but their own state: "Ambazonia."

DW: Observers say that there are around ten different separatist groups in anglophone Cameroon. Which groups do you belong to?

Catongo: We started by forming a vigilante group, taking care of our community. When all these things started, the military brutalized people, they came to the communities, broke into their houses, stole their televisions - they took my television, money, they beat my mother. That is why we formed this group. We are more than 100 fighters, but we don't belong to a specific group.

Catongo nearly lost his life when soldiers attacked his house. He shows us the gunshot wounds on his back; the bullets exited through his armpit and became badly infected. Cobra and Motia Esomba were wounded in battle. Both have broken bones, which is why they've taken refuge in Nigeria as they wait to recover.

DW: The government troops are well armed. What kind of weapons do you have?

Cobra: We have guns, hunting guns. Those were the only weapons we found in our fathers' houses. I used to accompany my father for hunting, so I have good knowledge about my gun and I even prefer it. But what has kept us alive until now is the knowledge about our terrain.

Catongo: We have no weapons. We started fighting with sticks. But we sometimes managed to get weapons when we fought with the military. They come with weapons to kill and we try to take these weapons from them

A hour's drive from the hotel, 3,000 Cameroonians have found refuge in the Adagom refugee camp. It is estimated that 300,000 Cameroonians have been displaced by the crisis, 30,000 of them having fled to Nigeria. No matter with whom one speaks here, they blame the Cameroonian government. Everyone here suffered under the strong hand of the military.

The refugees will not be able to vote in Sunday's polls, says community leader Agbor Flavious, but many also don't want to. He expects the 85-year-old President Biya to win again. "He hasn't done anything for us," says Flavious. "Why should he help us in his old age?"

DW: Cameroon plans to hold presidential elections on Sunday, October 7. Will it even be possible to hold elections in the anglophone regions?

While the separatists blame the government for the violence, rights groups say that both the government and separatists have committed crimes against civilians. According to Human Rights Watch, government troops are reported to have killed and tortured people, they've burnt villages and used excessive force against protesters. The rights groups however also spoke to people who experienced how separatists, extorted, kidnapped and killed civilians.

DW: The separatists have also been accused of using violence against civilians.

Cobra: The military are the ones committing these crimes. They do this to justify the violence against us.

DW: You have also forced schools to shut down. Teachers have been attacked. Why?

Cartongo: You cannot go to school when your father has been killed by the military and your mother was raped. The children have even said so themselves. There will be no school, no market; all activities must be stopped until the problem is solved. Education is good and important. Nobody says that going to school is bad. But not under these circumstances.

DW : Your own children cannot go to school. Does that not worry you?

Catongo: I told my children: even if you don't go to school for ten years, it's better than going to school under Biya. One day we will have independence. And even if you go to school here - as an English-speaker, you will never get a job from the government.

DW: Church leaders have called for a dialogue between all parties. Would you be willing to enter such a dialogue.

Cobra: We don't have a problem with that. The problem is Mr. Biya. Everybody is ready for a dialogue, but there are conditions. The solution to this crisis lies in the hands of Paul Biya.