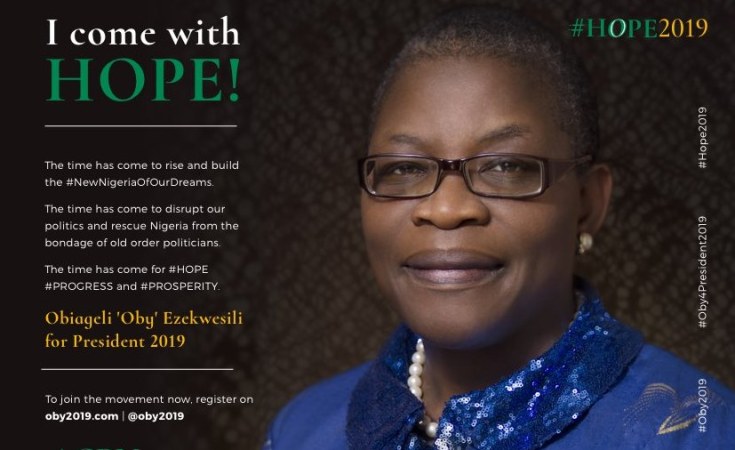 Nigeria is blessed with many political parties albeit wriggling to create a niche for themselves.

With all the primary elections and agreements going on in the various parties, one more declaration was made.

Oby Ezekwesili has declared for president. She was the advocate for "Bring back our girls" campaign, she was nominated for a nobel prize but unfortunately did not win one.

She has decided to fight extensively for Nigeria.

This is why, today, in response to the candidates of the #ACPPDP, I have officially declared my candidacy to run as a citizen, alongside you and other citizens, for President of the Federal Republic of Nigeria in 2019.

You no longer want a young president.

We are our own problem

At last, someone with sense in the race. pic.twitter.com/7qqER5AoeC

Oby Ezekwesili emerges as ACPN presidential candidate. When did they do their own primaries?

In a perfect world, people like Oby Ezekwesili, Kingsley Moghalu and similar characters would be chosen without much question to lead Nigeria into a brighter future. Unfortunately our world isn't perfect, so this fight, in practical terms, is down to Atiku vs Buhari.

But then the stark reality is;

Just learnt that Oby Ezekwesili has joined the Presidential race.

As eminently qualified that she is, as perfectly suited she is for d job of re-building the country and indeed polity, Nigeria is NOT just ready for a female president.

Wait a few years I'd say

BBOG Leaders Step Down to Back Oby Ezekwesili's Presidential Ambition