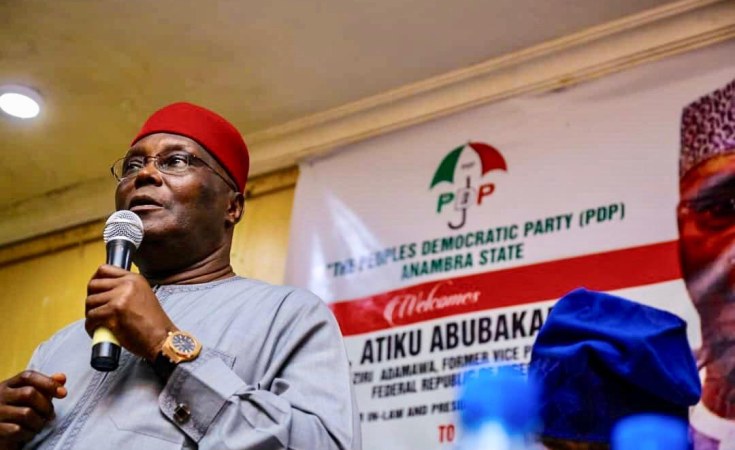 After zigzagging the floor for over a decade, the nomadic former VP is a little closer to winning the Nigerian presidency than ever before.

In highly-anticipated primaries this weekend, Nigeria's main opposition party picked Atiku Abubakar to be its presidential candidate. The former vice-president won a resounding victory to become the flag-bearer for the People's Democratic Party's (PDP) in the upcoming 2019 elections.

In what were considered to be the party's most competitive primaries ever, the 71-year-old Abubakar (popularly referred to as Atiku) garnered 1,532 of the 3,274 votes from party delegates (around 47%). Sokoto governor Aminu Tambuwal came a distant second with 693 votes (21%). Senate president Bukola Saraka came third with 317 votes (10%).

In his acceptance speech, Atiku issued a rallying cry to the party. "We have a wonderful opportunity to return the PDP to power," he declared. "We've enumerated the challenges faced by the country over and over. What we need to do is to proffer solutions. That is what will make us different from the clueless government."

Atiku, a Muslim from the north-eastern state of Adamawa, has been ever-present on Nigeria's political scene for over 25 years. He was a top official in the Nigerian Customs Service for two decades before leaving his job to run for office in the early 1990s. He first ran to be a governor in 1991 then contested unsuccessfully to be the presidential candidate for the Social Democratic Party (SDP) in 1993.

In 1998, Nigeria's military leader Sani Abacha died, leading to the restoration of multi-party democracy. In the momentous 1999 elections, Atiku was the vice-presidential nominee on a joint ticket with Olusegun Obasanjo. The two partners swept to power with 63% under the banner of the newly-formed broad-based PDP.

Obasanjo and Atiku led the country for the next eight years, which saw some important economic gains. Atiku has since claimed credit for liberalising the telecoms sector, which has gone onto flourish, and for privatising underproductive government assets in this time.

This era is also remembered, however, for deepening corruption. Although their time in office saw some high-profile figures prosecuted for graft, both Obasanjo and Atiku have themselves been accused of grand crimes.

Some of these accusations emerged after the two leader fell out in dramatic fashion in 2006, allegedly over Obasanjo's plans to amend the constitution so he could run for a third term. This rift led Atiku to decamp from the PDP, setting off a long journey through parties and primaries that has continued to this day.

First, Atiku joined the Action Congress of Nigeria (ACN). He ran as their presidential candidate in 2007, coming a distant third behind the PDP's Umaru Yar'Adua and the All Nigeria Peoples Party's (ANPP) Muhammadu Buhari.

In 2011, Atiku re-joined the PDP. He challenged then President Goodluck Jonathan, who had taken office following Yar'Adua's untimely death, but fell short in the primaries.

In 2013, he defected to the newly-created opposition APC. This time he lost the contest to represent the party to Buhari. He vowed to support his colleague nonetheless to end the PDP's 16-year rule. The APC was successful, but Atiku was soon schemed out of Buhari's inner circle.

He returned to the PDP for the third time in February 2018. This time, he was successful in his bid to lead the party into elections.

Atiku was a clear front-runner for the PDP's presidential pick. More so than his competitors, the former VP is well-known in Nigeria, has vast experience in corridors of power, and has a large war chest.

"Atiku is the only one of the PDP contenders that could actually defeat Buhari so his win shouldn't come as too much of a surprise," says Sola Tayo, Associate Fellow at Chatham House.

In many ways, however, the hard work begins now. To begin with, Atiku will have to unify the party. Like the APC in 2015, today's PDP is made up of a large and motley crew of ambitious individuals and returnees from other parties. These groups are united not so much in their shared vision for the country as in a desire to remove the APC from power.

In the aftermath of the primaries this weekend, the defeated contenders were keen to show their support for Atiku. "All the other aspirants, especially myself, are ready to walk and work with him to spread the positive message of the PDP," vowed Senate President Saraki. In a show of solidarity, the defeated contestants stood behind Atiku during his acceptance speech. This bodes well for the presidential hopeful, but he will nonetheless have this work cut out balancing alliances and promises to keep enough of this diverse group happy.

Atiku will also have to develop a strong manifesto to appeal to voters. He will be helped in this by widespread frustrations at high levels of unemployment, unreliable power generation and the weak economic performance under Buhari. Atiku has criticised the president's interventionist economic policies, which he says are "clearly anti-business and anti-foreign investment." He has expressed support for greater regional autonomy and has called for increased spending on education.

Atiku may be the best-placed individual to unseat the 75-year-old President Buhari in February 2019. With the backing of the PDP, he will provide a strong challenge. But he nonetheless faces an uphill battle. The former vice-president is very rich with multiple lucrative business interests, but is still likely to struggle against the advantages of incumbency.

It is also the case that his wealth comes accompanied by serious allegations of fraud. Atiku is one of the richest politicians in the country renowned with high-level corruption. A senate investigation in 2006 found Atiku guilty of illegally taking funds belonging to the Petroleum Training Development Fund (PTDF). The former vice-president has also been consistently linked with jailed US Congressman William Jefferson who was sentenced to 13 years in a US jail for bribing Nigerian officials in 2007.

The APC and other detractors - such as former President Obasanjo - will undoubtedly recycle these facts during the election campaign, especially in trying to contrast Atiku with the president. Although many have been disappointed by Buhari's promised "war on corruption", he is still seen as relatively incorruptible among Nigeria's politicians.

A big part of the 2019 elections may come down to straightforward electoral maths. Both Atiku and Buhari are from the north-east. This geopolitical zone accounts for 25% of registered voters and provided Buhari with 46% of his entire 15 million vote count in 2015. Atiku will have to eat into this significantly if he is to mount a realistic challenge.

The PDP nominee will also have to pick his running mate carefully. Vice-President Yemi Osinbajo is a Yoruba from the populous south-west. Atiku will have to bear this in mind when balancing his own ticket. He will have to create the right ethnic balance to counter Osinbajo's popularity while also appealing to smaller voting blocs.

With four months to the elections, much remains uncertain. The ruling APC has a mixed record in office and has crumbled around the edges recently with several figures defecting to the PDP. Oby Ezekwesili, the former education minister and founder of the Bring Back Our Girls movement, has just announced her own bid for the presidency, answering widespread calls for a third option in the elections and potentially complicating the race. And recent state elections in Ekiti and Osun involved voter intimidation and irregularities that observers worry could be repeated in the national elections, skewing the outcome.

For now though, Atiku's victory in the PDP primaries confirms some of the battle lines that will shape the crucial 2019 vote. After zigzagging the floor and knocking on closed doors for over a decade, it seems that whatever happens, the nomadic former VP is a little closer to winning the Nigerian presidency than he has ever been.

Atiku's Many Shots At Presidency

Twenty Parties Name Their Candidates for Nigerian Elections
Tagged:
Copyright © 2018 African Arguments. All rights reserved. Distributed by AllAfrica Global Media (allAfrica.com). To contact the copyright holder directly for corrections — or for permission to republish or make other authorized use of this material, click here.