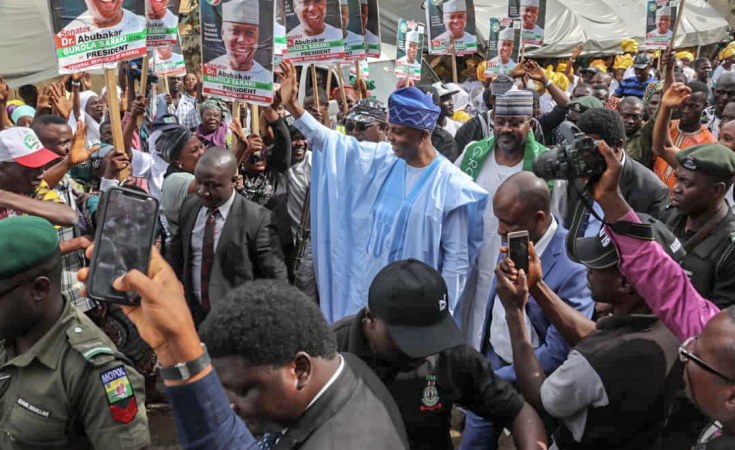 What seems like the longest annual recess of the National Assembly is expected to be over Tuesday.

Federal lawmakers are expected to resume plenary on October 9 if the recess is not postponed again.

The recess is ideally a few weeks break lawmakers embark on every year. It gives them time to proceed to their constituencies to interact with their constituents on varied issues of national interest.

The National Assembly embarked on its annual recess on July 24 amidst controversies of defection and preparation for party primaries. It was scheduled to resume on September 25 but was postponed to October 9.

The clerk to the National Assembly, Mohammed Sani-Omolori, made the announcement in a statement on September 23. He said the postponement was due to primaries of the political parties.

Since the Senate embarked on recess, a lot of issues arose from both the ruling All Progressives Party (APC) and the main opposition party, Peoples Democratic Party (PDP). There was also a matter of urgent national importance from the executive.

Also, at this time, the Senate President, Bukola Saraki, defected from the APC to PDP and announced his presidential ambition. The Senate minority leader, Godswill Akpabio, also joined the APC and stepped down as the minority leader.

These defections sparked outrage from leaders and top members of the parties which led to accusations and counter accusations from both sides.

Following Mr Saraki's defection, there were calls from the APC for the senate president to step down or be removed - a threat which he (Mr Saraki) ignored as he said he would not step down.

Outside politics, issues were also raised about the killings in some parts of the country.

During the recess, lawmakers, top politicians and other Nigerians continually called on Mr Saraki to reconvene the upper chamber and tackle these issues - but the senate president, as well as other lawmakers were busy pursuing their political ambitions.

Here are some expectations of Nigerians as the Senate resumes.

Hours before the recess, there was mass defection in both chambers of the National Assembly. Fourteen senators dumped the APC for PDP and other parties while 37 members of the House of Representatives defected as well.

Few weeks after their defection, Mr Saraki announced his defection to the PDP.

It is believed that lawmakers who have defected from one party to another, did so in a bid to settle at a party where securing a ticket for another term would be easy.

Prior to its presidential primaries on Saturday and Sunday, some lawmakers of the party had threatened to leave the party should it adopt direct primaries for the 2019 elections.

Some senators who spoke with PREMIUM TIMES in August, said if the party adopts the usual indirect primary, it will lose its majority status at the Senate. For them, the only way to reclaim leadership of the senate is an assurance of direct primaries by the party.

The APC adopted direct primaries and conducted its convention over the weekend. To ward off further defections, the ruling party favoured incumbent senators in its primaries.

However, political analysts now say the victory of Atiku Abubakar - who emerged as the flag bearer for the PDP, will cause more lawmakers to join the PDP as he is believed to have loyalists, even in the APC.

More so, the PDP has boasted that some APC lawmakers and governors are willing to join the opposition party. It will therefore, be unsurprising to witness more defections when the senate resumes.

Following his announcement to join the PDP, some senators and leaders of the APC have continued to mount pressure on Mr Saraki to relinquish his position as senate president since his party does not have majority at the senate.

Top among people making such calls is the National Chairman of the APC, Adams Oshiomhole. He had accused Mr Saraki of not acting in the interest of Nigeria. He also asked Mr Saraki to resign or be removed from office.

Mr Saraki, however, said he would not resign as he believes he still enjoys the support of majority senators.

The APC says it still has a slight majority of 53 of Nigeria's 109 senators. However, two-thirds is constitutionally required to remove Mr Saraki, which means the ruling party would need the support of many opposition senators to achieve that feat, something it is unlikely to get as the race for 2019 heats up.

Prior to his defection, officials of the State Security Service (SSS) laid siege to the Abuja residences of Mr Saraki and his deputy, Ike Ekweremadu.

Speculation had been on, on the appropriateness of Mr Saraki as senate president, having defected from the ruling APC to the PDP. Some lawmakers and top politicians claimed that the siege was a plot to stop the leaders of the upper chamber from coming to the National Assembly so as to remove Mr Saraki and install a new leadership.

Ahmed Lawan was touted as a possible new senate president while Hope Uzodinma would be his deputy.

That plot to remove Mr Saraki is expected to continue.

Another key issue that members of the upper chamber are expected to tackle is the 2019 election budget.

The president had on July 14 transmitted the proposed budget for next year's election to the Senate. He sought the approval of N245 billion which he said will be drawn from the 2018 and 2019 budget.

Legislative work on the budget got controversial when the Independent National Electoral Commission (INEC) presented a budget of N189.3 billion for the election even though the president in his letter, asked that N143.5 billion be released to INEC in 2018 and N45.6 billion be released in 2019.

Members of the Senate committee on INEC were compelled to reconvene and invite the chairman of the electoral commission, Mahmood Yakubu, to explain the budget.

The commission's request caused members of the committee to again deliberate on whether to grant INEC's request or that of the president.

While some members of the panel suggested that the entire N189 billion be approved as requested by INEC, others were of the opinion that approving the entire amount will be going against the president's request.

Report from the committee is expected to be at the top of the order when on the day of resumption as leaders of the committee had said recommendations will be forwarded to the National Assembly leadership and the Committee on Appropriation for consideration and final approval.

The resurgence of killings by armed bandits across the country, especially some parts of Plateau State has raised concern among political and religious leaders and Nigerians in general.

This recent violence has been condemned by the president as well as the governor of the state, Simon Lalong, who called for calm and urged residence of the state to live in peace.

Another issue of concern is the recent flooding in several parts of the country. Some of the affected states include, Kogi, Niger, Anambra, Delta and Taraba. Others are, Kebbi, Edo, Rivers, Benue, Bayelsa and Kwara States.

Flooding in the communities of these states prompted the National Emergency Management Agency to declare National Disaster in the states.

Even though the vice president, Yemi Osinbajo, visited the affected areas and assured victims of the federal government's help, political watchers cannot but expect a motion that seeks to improve security as well as provide help in the affected areas.

Previous Story
Anxiety Over Fate of Saraki, Dogara As NASS Resumes
Next Story

Anxiety Over Fate of Saraki, Dogara As NASS Resumes

Saraki Named Atiku's Presidential Campaign Director
Tagged:
Copyright © 2018 Premium Times. All rights reserved. Distributed by AllAfrica Global Media (allAfrica.com). To contact the copyright holder directly for corrections — or for permission to republish or make other authorized use of this material, click here.