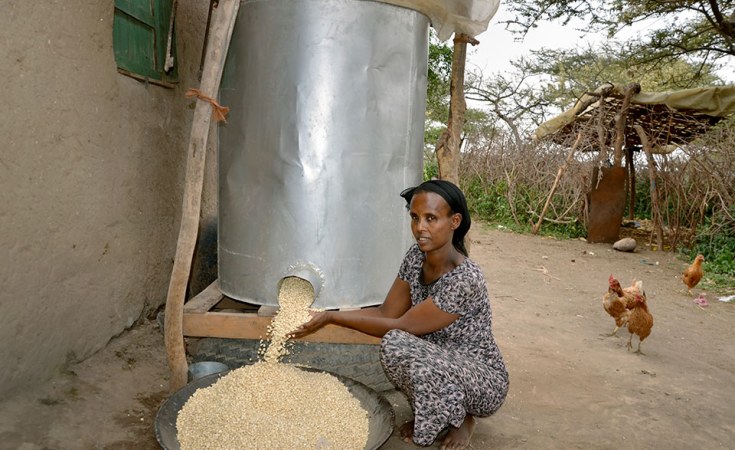 *Any views expressed in this article are those of the author and not of Thomson Reuters Foundation.

Small-holder farmers in sub-Saharan Africa often experience lower yields, and efforts to increase them have sprouted throughout Africa. Many farmers fail to adopt modern inputs or farming techniques that would increase productivity due to several constraints, such as lack of available technology, limited liquidity, high perceived risk, constrained access to information, and poorly functioning output markets. Initiating reforms given this background is a slow process. Any new intervention to address these concerns, however, dramatically raises the expectation of national governments, and undervalues modest but significant gains from such interventions.

Ethiopia provides a clear example of agricultural underperformance, as the country's wheat production has consistently lagged other African nations. In 2012, Ethiopia's wheat yields were 29 percent below neighboring Kenya, 13 percent below the African average, and 32 percent below the global average.

To help address these shortcomings, Ethiopia's Agricultural Transformation Agency introduced the Wheat Initiative in 2013, a package intervention program designed to boost wheat yields through improved inputs and procurement. In recent IFPRI research, published in Agricultural Economics, we examined the impact of the Wheat Initiative on farmers yields, which provides important lessons for how programs can boost yields in underperforming areas.

The Wheat Initiative provided a package of three broad interventions to 2,000 farmers across 41 woredas, or districts, in the four-major wheat producing regions in Ethiopia. Interventions included better access to improved inputs such as certified wheat seed, fertilizers, and gypsum to improve soil structure and enhanced techniques focused on lowering seeding rates, row planting, and balanced fertilizer use. Additionally, it included a government commitment to buy farmers' wheat at or above the market rate to reduce marketing risk to farmers. The Initiative first worked with lead farmers to promote the new package, and then other farmers would learn about both types of inputs and techniques that would improve their wheat productivity.

To measure the impact of the Wheat Initiative, 504 potential lead farmers were randomly allocated into three separate groups; one received the entire package program, one accepted market assistance only, and a control group. All three were informed of the recommended new techniques and inputs, but only one group received them at a subsidized rate. We found that the group that received the full package program had a 14 percent increase in yields. If such a result was uniform across the entire country, the yield increase would translate into additional half million tons of wheat!

While these findings represented a significant positive change, this growth was smaller than the Ethiopian government's expectation, which hoped for doubled yields. It is likely the difference between expectations and actual results may underestimate the true change associated with the technology because of incomplete adoption of the recommended practices. For example, 39 percent of farmers chose not to adopt row planting completely, due to the implicit cost of additional labor to row plant. Changing material input rates when they are made available is not particularly difficult, whereas changing farmer behavior takes significantly more time.

Nonetheless, important lessons for both intervention design and policy can be gleaned from this study. A drawback of using a package approach, an intervention with several components, is the difficulty in determining which is the true catalyst of yield improvements. The findings represent a substantial improvement in wheat production. If the package was adopted by all wheat farmers as lead farmers did in the trial, and average gains remained the same, aggregate wheat production in Ethiopia would rise by 600 thousand metric tons, nearly the size of Ethiopia's net wheat imports! So, the key then is for governments or other practitioners to remain engaged, spreading interventions like this one, while taking a long-term perspective for these interventions to bear fruit.

Get Us Out of Here - U.S. to Evacuate Citizens Out of Africa
Sport