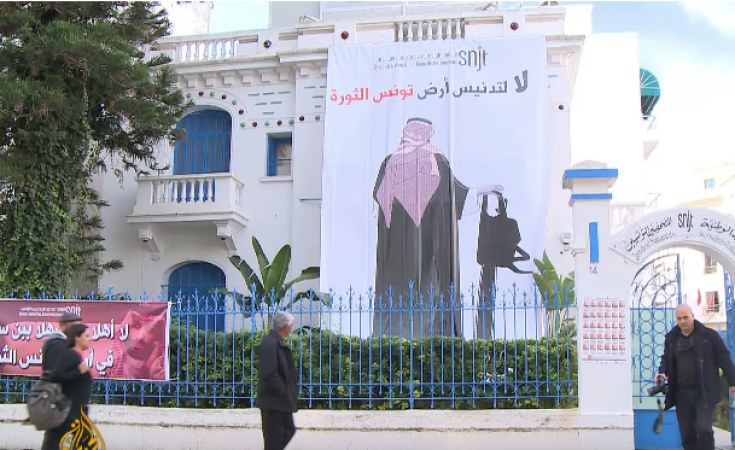 Photo: Al Jazeera/YouTube
Video screenshot of a poster hung on the office building of the Tunisian Journalists' Syndicate depicting Saudi Prince Mohammed bin Salman holding a chainsaw with the phrase 'no to the desecration of Tunisia, land of the revolution'.
The Guardian (Lagos)
opinion By Dare Babarinsa

Saudi Arabia is a country associated with mystery and romance. It is an ancient country grappling with the demons of modernity while it continues to assert its Islamic heritage. Saudi Arabia is the home of the greatest pilgrimage site in the world, the holy shrine in Mecca and some believers of the faith hold that when you walk on the same ground once trod by Holy Prophet Mohammed, great things would happen to you and your life would never be the same. It is from this land of the Arabian carpet and ancient perfumes and magical chants that Jamal Khasoggi fled.

Khasoggi was a journalist and journalists have the bad habit of minding other people's business. Some people believe it is hopeless to continue to hope that Khasoggi is still alive. Last Tuesday, he had gone to the Saudi consulate in Istanbul, Turkey, to get necessary papers so that he can marry his Turkish fiancée. He had come from the United States for that purpose for his fiancée parents reside in Turkey. Since he fled into exile, Khasoggi had lived in the United States where he was an influential commentator for several American newspapers including the Washington Post.

His fiancée accompanied him to the consulate but then decided to wait for him outside. Khasoggi, sensing that there might be trouble, agreed with his woman that she should keep vigil until he returns. After waiting for several hours and she did not see him, she raised alarm and lodged complaints with the Turkish authorities. When contacted, the consulate agreed that Khasoggi was with them but that he had since left. Nobody believes the Saudis for there is only one entrance and exit to the consulate and there was no way his fiancée would have missed him. He had literally disappeared into the thin air.

Khasoggi's fiancée has appealed to world leaders, especially President Donald Trump of the United States to prevail on the Saudi authorities to tell the truth about her lover, the famous Saudi journalist and exiled dissident. Hatice Cengiz who was set to marry Khasoggi last Wednesday, stated in an article in the Washington Post that the world must insist on knowing the truth about the disappeared journalist. She stated: "Although his opinions had angered certain people, he said the tensions between himself and Saudi Arabia did not amount to hate, grudges or threats." She added: "Although my hope slowly fades away each passing day, I remain confident that Jamal is still alive. Perhaps I'm simply trying to hide from the thought that I have lost a great man whose love I had earned."

The Washington Post Chief Executive, Fred Ryan, said there is enough evidence to believe that Kashoggi was a victim of "state-sponsored cold blooded murder." He said the international community must compel Saudi Arabia to tell the truth about the disappearance of Kashoggi. "For the sake of Jamal's family, we call again for answers about Jamal and his whereabouts. Silence, denials and delays are not acceptable," he said.

Under international law, the embassy and consulates of foreign countries are regarded as the sovereign territories of those countries. There are no exceptions to this Law. Therefore, the Saudi consulate in Istanbul is regarded as part of Saudi Arabia. The Turkish authorities have no direct access to it. Because of pressure from Europe and other parts of the world, it appears that the Saudi authorities may grant permission for Turkish officials to enter the consulate as part of investigation to Kashoggi's alleged murder.

The New York Times has reported that sources claimed Kashoggi may have been assassinated on the order of a top member of the Saudi royal court. It alleged that a team of 15 expert killers travelled from Saudi Arabia in two charter flights to Ankara. One of those on board was said to be an autopsy expert who may have helped in dismembering Kashoggi's body after he met his gruesome fate. The Saudi authorities have vehemently denied any involvement in Kashoggi's suspected fate. However, security cameras recording of the journalist entering the consulate was released.

There was no recording of his leaving the consulate.

Saudi Arabia has never been a safe place to practice journalism especially if you want to question the meaning of Yes Your Majesty! It is officially an Islamic state where citizens have no right to any other belief. The country was founded in 1925 by the soldier-prince, Ibn Saud at the height of the Wahhabis conquest of the Arabia, part of the old Ottoman Empire, with the help of the then world Super Power, Great Britain. This conquest united the former kingdom of Hejaz with the capital in Mecca and the sultanate of Nejd, with the capital in Riyadh under a single sovereign authority. The new rulers belonged to the Sunni sect of Islam and they formed a strong alliance with the Sunni clerics who dominate the Mosques and are in control of the holy shrines. In 1932, Prince Ibn Saudi proclaimed himself the King and named the country after himself.

Since then, the country has been in the grip of the House of Saud. Ibn Saudi was succeeded by his son Prince Saud ibn Abdul Aziz who reigned from 1953 until he was deposed in a palace coup in 1964. Prince Faisal, who led the coup, became king and he too was assassinated in 1975. Since then, the Saudis have learnt how to manage succession. The princes are numerous, wealthy and powerful. They control all the oil wells and constitute at least 60 per cent of cabinet members. All the princes are multi-millionaires and their lives are assured by the state from the cradle to the grave.

Then a new prince came to town. Mohammed bin Salman, the 33-year old Crown Prince is the de-facto ruler of Saudi Arabia. Last year, he cracked down on opponents, many of them members of the extended Saudi royal family, accusing them of corruption. Many of those arrested were detained in a five-star Riyadh hotel until they parted with billions of dollars. Writers and female activists were to suffer worse fate as they were thrown into prison.

Khassoggi had questioned the hypocrisy and rottenness of the Saudi system and the sheer barbarity of carrying out public execution by beheading. He was a subtle critic, writing in the mellifluous poetic cadence of classical Arabic for he regarded himself as a loyal Saudi citizen who loves reforms but did not want a revolution. The Saudi authorities, worried about the convulsions in other Arab countries and the challenge to Sunnis power by rival Shiites in neighbouring Yemen were not prepared for dissent at home. Khashoggi was ordered to stop writing. His voice was stilled forever by royal decree. He fled. Last Tuesday, he took a walk into the Saudi consulate.

For us in Nigeria and Africa, Khashoggi's fate has the ring of home-truth. Since the 20th Century, new African states have assumed the power of omnipotence. This theory of omnipotence has also led to the delusion that the state can do no wrong. Therefore many African rulers have assumed the powers of ancient monarchs protected by modern armour tanks. How these African rulers would envy Prince Saud! They know no one dare name a country after himself anymore. If it could be done Yuweri Museveni would have done so many years ago since he seized the reign of power in Uganda in 1986 when General Ibrahim Babangida was Nigeria's military ruler.

For us in Nigeria, there have been mysterious deaths but few direct hit from the state. On October 19, it would be 32 years since Dele Giwa, first Editor-in-Chief of Newswatch, Nigerian pioneer newsmagazine, was killed with a parcel bomb by suspected agents of the state. General Sani Abacha, who succeeded General Ibrahim Babangida after the brief interregnum of Chief Ernest Shonekan, was believed to have a killer squad. Among the victims of the killer squad were the likes of Chief Alfred Rewane and Alhaja Kudirat Abiola. Up till today, the Nigerian state has not been able to obtain a single conviction over those crimes even when there is overwhelming evidence against the suspects. The killers are walking free among us and some of them may be eyeing higher offices of state.

So if Khasoggi had been captured in Riyadh or Mecca or he has disappeared during his honeymoon on an African safari, perhaps, few would have raised eyebrows. But then he entered the consulate of the desert kingdom of Saudi Arabia in modern Ankara, a city in democratic Turkey where the citizens have rights and the press is vigorous and the rulers are accountable. This is one murder that may not go away quickly like the mirage of the Arabian desert. Solving the mystery however may be like looking for footprints in the desert. 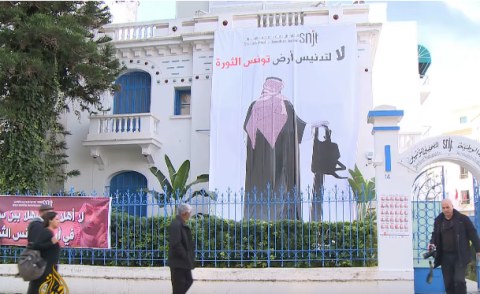 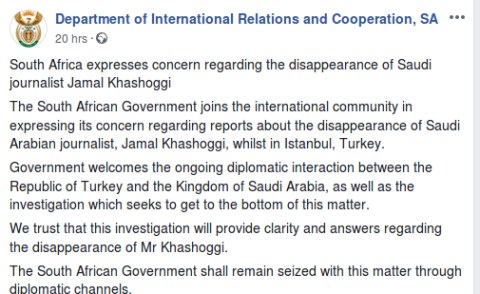 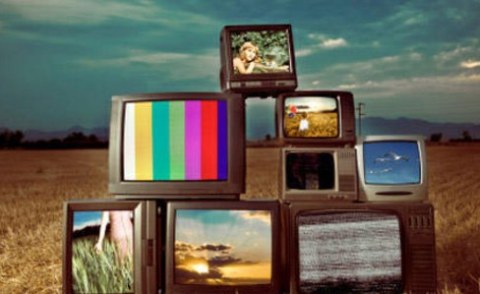 After Khashoggi, How Safe Are African Critics of Saudi Arabia?
Tagged:
Copyright © 2018 The Guardian. All rights reserved. Distributed by AllAfrica Global Media (allAfrica.com). To contact the copyright holder directly for corrections — or for permission to republish or make other authorized use of this material, click here.